From coast to coast, conservation coalitions are fighting to restore major U.S. watersheds 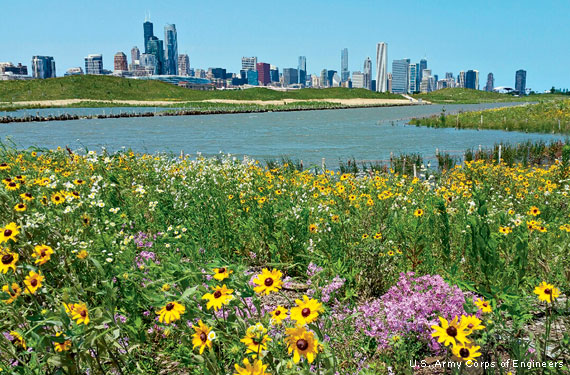 UNTIL RECENTLY, THE MAIN FLIGHTS onto Lake Michigan’s Northerly Island were by planes landing at Meigs Field airstrip. But today this site boasts 40 acres of rolling hills and native plants that instead attract flights of winged wildlife, from butterflies to migratory birds. Transformation of the former Chicago airfield into a wildlife oasis “is an example of one of the most successful conservation efforts in America today: the restoration of the Great Lakes,” says Todd Ambs, campaign director for the Healing Our Waters–Great Lakes Coalition.

Opened in a ribbon-cutting ceremony last October, the preserve is among more than 2,500 projects across the Great Lakes region funded through the $2 billion Great Lakes Restoration Initiative (GLRI). During the past six years, this effort has cleaned up toxic waste, cut nutrient pollution, controlled invasive species and restored or protected more than 150,000 acres of wildlife habitat.

“Just over a decade ago, scientists said the Great Lakes were at a tipping point, beyond which their health would be in jeopardy,” Ambs says. Such concerns led clean-water advocates, including the National Wildlife Federation, to convene a 2004 conference that spawned the Great Lakes coalition. Co-chaired by NWF, the coalition now has more than 125 members, from local, state, regional and national environmental groups to museums, zoos and outdoor-recreation organizations. Such diversity has made the group a powerful force for conservation, giving rise to the GLRI as well as strong bipartisan support for its long-term funding.

Thanks to the coalition’s success, similar alliances have emerged nationwide. They include the Coalition for the Delaware River Watershed, Restore the Mississippi River Delta Campaign and Choose Clean Water Coalition—all co-chaired by NWF.

The Federation and its partners also have launched a nationwide water-restoration alliance. The America’s Great Waters Coalition targets “one of the seminal challenges of our time,” says Adam Kolton, the coalition’s co-chair and NWF’s vice president for national advocacy. “From Puget Sound to the Everglades, our nation’s Great Waters face similar problems, including habitat loss, nutrient pollution and invasive species. They should not have to compete for funding.” He adds that greater strength can come from greater numbers. “The coalition thinks of itself like NATO,” Kolton says. “An attack on one Great Water is an attack on them all.”