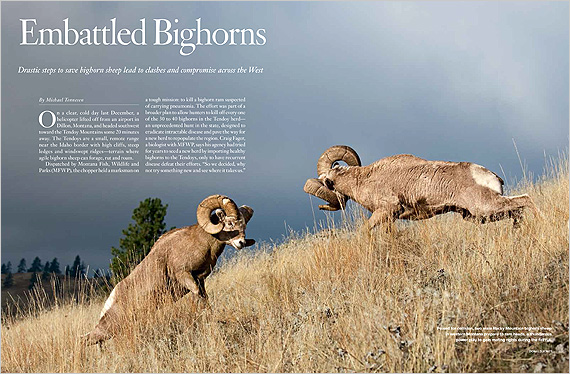 ON A CLEAR, COLD DAY LAST DECEMBER, a helicopter lifted off from an airport in Dillon, Montana, and headed southwest toward the Tendoy Mountains some 20 minutes away. The Tendoys are a small, remote range near the Idaho border with high cliffs, steep ledges and windswept ridges—terrain where agile bighorn sheep can forage, rut and roam.

Dispatched by Montana Fish, Wildlife and Parks (MFWP), the chopper held a marksman on a tough mission: to kill a bighorn ram suspected of carrying pneumonia. The effort was part of a broader plan to allow hunters to kill off every one of the 30 to 40 bighorns in the Tendoy herd—an unprecedented hunt in the state, designed to eradicate intractable disease and pave the way for a new herd to repopulate the region. Craig Fager, a biologist with MFWP, says his agency had tried for years to seed a new herd by importing healthy bighorns to the Tendoys, only to have recurrent disease defeat their efforts. “So we decided, why not try something new and see where it takes us.”

Montana is only one of several states taking drastic steps to save bighorns from disease. This February, for example, the Nevada Department of Wildlife (NDOW) discovered pneumonia in what had been a healthy herd of about 100 bighorns. Wheezing and frail, the herd suffered a 75 percent die-off, prompting NDOW to dispatch wildlife professionals to gun down the last survivors to prevent the disease from infecting adjacent herds. “Our guys were devastated by having to do this,” says NDOW spokesman Chris Healy. “But if we didn’t do anything, we had a good chance of this thing spreading.”

This “thing” is pneumonia, a severe respiratory disease that develops when susceptible bighorn sheep become infected with strains of Mycoplasma or Pasteurellaceae bacteria. Of the three subspecies of bighorns—Rocky Mountain, desert and Sierra Nevada—the first two have each suffered outbreaks in recent years, with herd die-offs reaching up to 90 percent.

"There are 15 states in the West that have bighorn sheep, and at least 13 have had pneumonia die-offs,” says Kevin Hurley, conservation director of the Wild Sheep Foundation. That’s especially troubling in light of population trends. By the early 1900s, bighorns had vanished across vast swaths of the West due to disease, hunting, predation and other factors. By the end of 2015, populations had recovered to roughly 85,000 animals thanks to costly restoration efforts. Yet those now seem threatened. Because bighorns are an iconic species with cultural and economic value to tribes, hunters and wildlife watchers, the recent disease losses have wildlife researchers and managers scrambling for clues—and culprits. 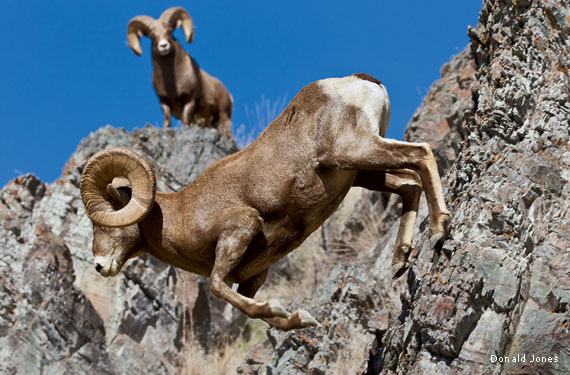 Numerous controlled studies show that bighorns can contract pneumonia after coming in contact with domestic sheep and goats, which often carry the disease-causing bacteria but generally show no ill effects. Unfortunately, such contact is easy to come by. Millions of domestic sheep graze on public-land allotments—vast acres managed by the U.S. Forest Service (USFS) and Bureau of Land Management (BLM)—that often lie adjacent to bighorn range. Escaped sheep may wander into bighorn territory, and bighorn rams roaming in search of mates may commingle with domestics. Contact doesn’t guarantee disease, but sheep can effectively pass a pathogen simply by rubbing noses or coughing near a bighorn, which can then pass it on to infect a whole herd.

“Only one effective contact is probably enough to trigger a pneumonia outbreak,” says Thomas Besser, a professor of veterinary microbiology and pathology at Washington State University who is researching pneumonia transmission. “Wildlife managers who detect bighorn sheep in contact with domestic sheep usually choose to kill the bighorn rather than risk it carrying the pneumonia pathogen back to its herd.” 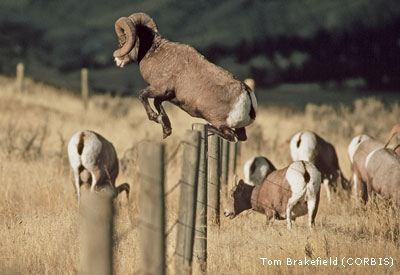 Because there’s no known treatment or cure, pneumonia is best fought through prevention, which means keeping bighorns and domestic sheep apart. That’s where things get sticky.

In 2010, after years of scientific study, USFS banned domestic sheep from nearly 70,000 acres of grazing allotments in Idaho’s Payette National Forest, where die-offs had shrunk bighorn populations dramatically. Idaho sheep ranchers and industry groups sued to stop the move. The protracted case was finally resolved in March of this year, when the 9th Circuit Court of Appeals sided with USFS, allowing the ban to stand. “It’s a huge win,” says Brian Brooks, Sportsmen Coordinator for the Idaho Wildlife Federation. “Science prevailed.” Yet many sheep ranchers were disheartened by the news. “When something goes wrong,” says Peter Orwick, executive director of the American Sheep Industry Association, “I fear there’s too much attention placed on livestock being the culprit.”

Creative Approaches to a Crisis 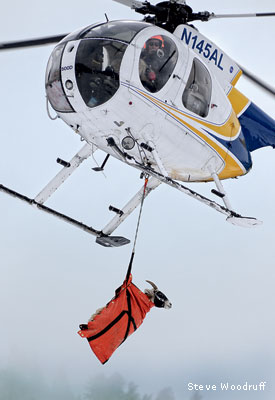 “Our goal is not to put people out of business, but we have to work together to develop solutions,” says Clay Brewer, chair of the Western Association of Fish and Wildlife Agencies’ (WAFWA) Wild Sheep Working Group, which hailed the court decision. “Domestic and bighorn sheep can both be on the landscape, but they can’t be in the same spot at the same time. It’s that simple.”

Though finding solutions is anything but simple, the National Wildlife Federation and many of its affiliates—including state wildlife federations in Colorado, Idaho, Montana, Nevada, North Dakota and Wyoming—are leading the way by developing collaborative programs to address the problem.

One such effort is NWF’s Wildlife Conflict Resolution (or Adopt a Wildlife Acre) Program, which compensates ranchers for giving up grazing rights in areas where livestock and wildlife may come in conflict. Because the Payette decision makes the future of such grazing allotments on public lands uncertain, ranchers now have more incentive to pursue alternatives.

Negotiating with sheep ranchers requires respect for tradition. “Recognizing a producer’s long connection to the land is crucial,” says Fischer. “But ultimately, raising sheep is a business, and any good businessman has to adapt to changing market conditions. Our program gives producers an opportunity that likely wouldn’t exist otherwise. They recognize that we are providing a solution and not just calling to complain.”

Even retiring a small allotment can make a big difference if the location puts bighorns at risk. To assess that risk, USFS, BLM and several western states and tribes developed a model called the Bighorn Sheep Risk of Contact Tool, which NWF and its affiliates recently endorsed as reflecting “the best available science” for pinpointing areas where domestic and wild sheep have the greatest risk of meeting. It’s one of many tools WAFWA is using in an effort to study bighorn herds across the West, standardize disease-testing protocols and develop management strategies to protect priority herds—“one of the best things we’ve done for wild sheep in decades,” says Brewer.

Closing in on a Killer

Such efforts are critical given that there are still unknowns about how pneumonia impacts bighorns. Some infected herds suffer huge die-offs, some lose just a few individuals, and others experience poor lamb production and survival over time. “There’s no consensus on how the disease works,” says Bob Garrott, a wildlife ecologist at Montana State University. “We think there are factors that make one herd resilient and robust and another susceptible to disease.” To learn more, Garrott is leading a six-year study of seven bighorn herds in Montana, capturing, testing and tracking animals to study their movements, population dynamics, physiology, nutrition and genetics—all factors that may impact disease. 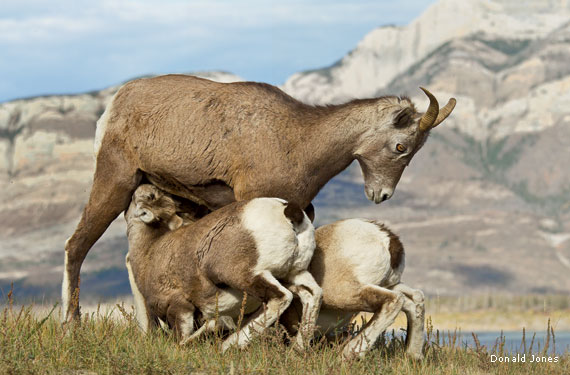 Insights into such issues could spell life or death across bighorn range, where pneumonia continues its march. The disease recently flared up among desert bighorn in California’s Mojave Desert, far from large sheep ranching operations. “We never would have expected to find it here, but all of a sudden they’re dying like flies,” says bighorn researcher John Wehausen. In 2013, he says, ewes in one population plunged from roughly 140 to about 40 in a few months. And last summer, pneumonia killed a desert bighorn in nearby Joshua Tree National Park. Park ecologist Michael Vamstad thinks the disease may have come from contact with domestic goats, but the transmission route remains unclear.

“We are losing ground,” says Tom France, Northwest regional director for NWF. “Lots of what we thought were secure herds have collapsed.” Efforts to shore up dwindling herds through transporting bighorns from one region to another have met with mixed success, as the Tendoy herd attests. So separation of bighorns from domestic sheep through retirement of grazing allotments—and collaboration among ranchers, hunters, wildlife managers, biologists and legislators—offers the best hope for a long-term solution to the crisis. “Disease transmission is a very difficult problem,” says Besser. “We’ll be wrestling with this for decades.” 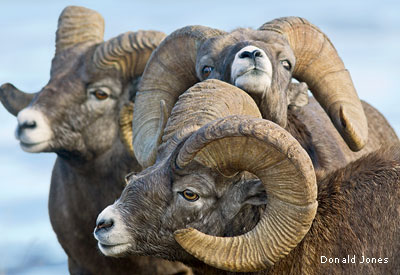 In March 2015, National Wildlife Federation affiliates passed a resolution endorsing separation of domestic and bighorn sheep as the best way to prevent transmission of pneumonia to bighorns. The resolution endorses voluntary retirement of domestic-sheep grazing allotments or conversion to cattle grazing on federal lands. NWF’s Adopt a Wildlife Acre Program has provided funds to help retire more than 1 million acres of grazing allotments to date, a boon for bighorns and other wildlife.

Michael Tennesen is author of The Next Species: The Future of Evolution in the Aftermath of Man.