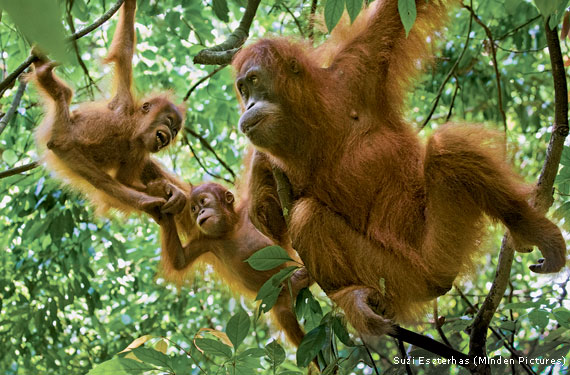 TEACHING MOMENT OR TIME OUT? It may be a little of both as a Sumatran orangutan mother retrieves her baby, which had been playing with another infant in the dense canopy near Sumatra’s Gunung Leuser National Park. “Orangutans are mostly solitary by nature,” says Suzi Eszterhas, who spent weeks trying to capture images of these critically endangered great apes. Because this region is so hilly, she could climb high enough for an ape’s-eye view, gaining “a lovely window into the natural behavior of these arboreal creatures.”

A patron of the Sumatran Orangutan Society, Eszterhas donates time and talent to conservation of orangutans, whose habitat is being overrun by palm-oil plantations. A professional wildlife photographer known for intimate images of animal mothers and their young, Eszterhas is fulfilling her “life’s goal.”