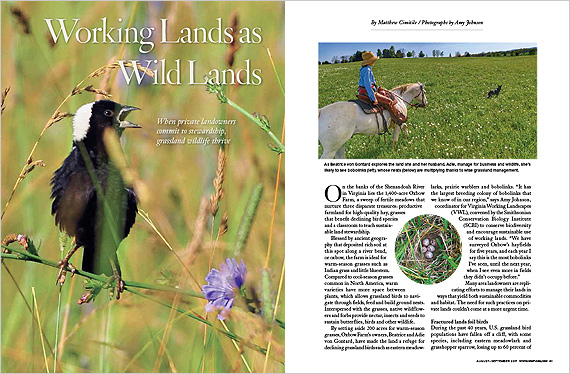 As Beatrice von Gontard explores the land she and her husband, Adie, manage for business and wildlife, she’s likely to see bobolinks (left), whose nests (bottom, right) are multiplying thanks to wise grassland management.


ON THE BANKS OF THE SHENANDOAH RIVER in Virginia lies the 1,400-acre Oxbow Farm, a sweep of fertile meadows that nurture three disparate treasures: productive farmland for high-quality hay, grasses that benefit declining bird species and a classroom to teach sustainable land stewardship.

Blessed by ancient geography that deposited rich soil at this spot along a river bend, or oxbow, the farm is ideal for warm-season grasses such as Indian grass and little bluestem. Compared to cool-season grasses common in North America, warm varieties have more space between plants, which allows grassland birds to navigate through fields, feed and build ground nests. Interspersed with the grasses, native wildflowers and forbs provide nectar, insects and seeds to sustain butterflies, birds and other wildlife.

By setting aside 200 acres for warm-season grasses, Oxbow Farm’s owners, Beatrice and Adie von Gontard, have made the land a refuge for declining grassland birds such as eastern meadowlarks, prairie warblers and bobolinks. “It has the largest breeding colony of bobolinks that we know of in our region,” says Amy Johnson, coordinator for Virginia Working Landscapes (VWL), convened by the Smithsonian Conservation Biology Institute (SCBI) to conserve biodiversity and encourage sustainable use of working lands. “We have surveyed Oxbow’s hayfields for five years, and each year I say this is the most bobolinks I’ve seen, until the next year, when I see even more in fields they didn’t occupy before.”

Many area landowners are replicating efforts to manage their lands in ways that yield both sustainable commodities and habitat. The need for such practices on private lands couldn’t come at a more urgent time. 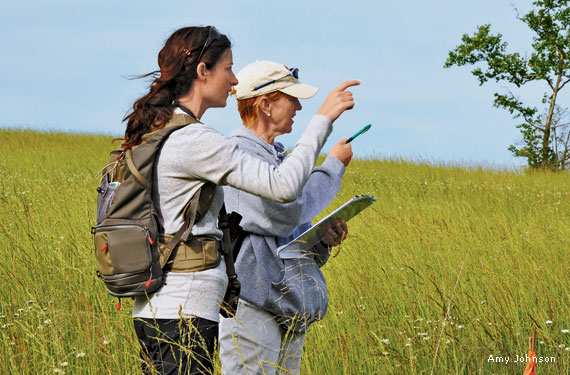 During a bird survey, conservationist Amy Johnson (left) and landowner Beatrice von Gontard count grassland birds such as the eastern meadowlark (below), which benefits from healthy native meadows.

During the past 40 years, U.S. grassland bird populations have fallen off a cliff, with some species, including eastern meadowlark and grasshopper sparrow, losing up to 60 percent of their populations. Pesticides, outdoor cats and collisions with buildings all have contributed, but the primary cause is shrinking habitat from development and industrial agriculture. These factors led to grassland losses equaling the size of Indiana by the turn of the 21st century.

“The agricultural landscape 50 years ago consisted of farms that had trees and shrubs around fields, providing more edge habitat,” says Ashley Peele, coordinator of the Virginia Breeding Bird Atlas, which surveys all bird species breeding in the state. “Today, most farms are monocultures, artificial landscapes of a single crop planted in every available square foot of soil.”

Grasslands that weren’t completely transformed by farms were often fragmented by roads and other infrastructure until they became unsuitable as nesting sites or as places where birds could hide from predators. In other cases, natural forces such as wildfires and grazing bison were suppressed or removed. Without such forces to reset the habitat over time, unmanaged grasslands eventually transformed into forests.

“In Virginia and the Appalachians in general, more land is converting to forests, with open spaces such as grasslands, pastures and fields losing out,” says Peele. “That is having a negative impact on birds that have evolved to live in these open environments.” 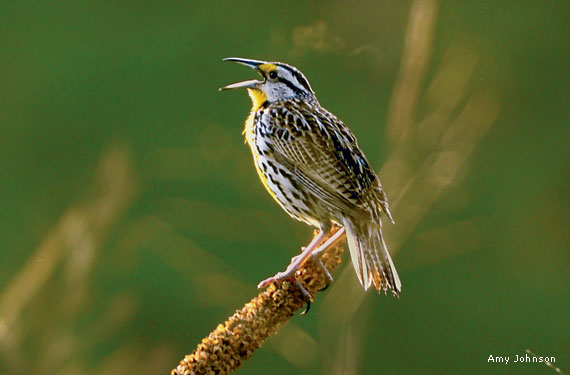 The Power of Private Lands

Most people know that working lands such as farms, ranches and private forests provide essential goods to society. The owners of these lands also are vital stewards of our nation’s wildlife. Roughly 60 percent of U.S. land is privately owned, and much is a source of critical habitat for wildlife and an essential part of healthy ecosystems. “In Virginia, 90 percent of our grasslands are privately owned,” says Johnson. “If we want to conserve grasslands for birds and wildlife, we need to work with private landowners.”

One key collaboration began in 2009, when local Virginia landowners concerned about preserving grasslands met with conservation groups, including the SCBI, American Bird Conservancy and Piedmont Environmental Council. This led to the formation of VWL, which began evaluating the responses of bird populations to sustainable conservation practices, an approach the von Gontards have embraced. 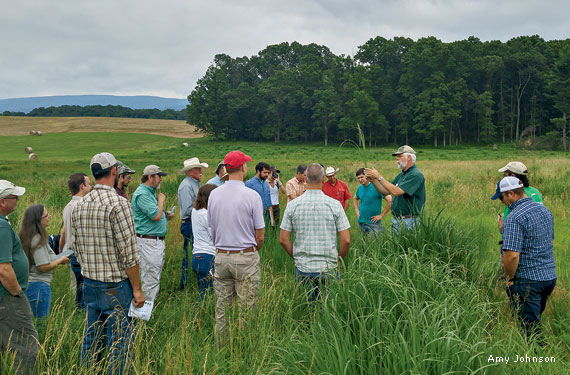 The von Gontards host workshops for area landowners who want to learn about warm-season grassland management.

The couple practice zero-tillage farming, which improves soil and reduces erosion. They install native plants such as goldenrods and asters, conduct prescribed burns, avoid pesticides, manage invasives and plant cover crops. They also delay mowing in select hay fields where bobolinks are present until the birds have time to nest and fledge their young. Since bobolinks return to fields near where they were born, this practice increases the number of birds that come the following season, according to research from the University of New England.


All these practices help increase native biodiversity, restore habitat for declining species and benefit both the natural world and Oxbow’s bottom line. “We keep finding ways to balance the economic needs of the farm with managing for wildlife,” says Beatrice.

To share what they’ve learned, the von Gontards host workshops on their property to teach about practices they’ve adopted and recruit new landowners into the VWL network. The group now works with more than 100 area landowners and scores of citizen scientists who have learned to identify and count birds, data that indicate which grassland practices are most beneficial.

To date, citizen scientists have visited more than 100 participating properties, surveying 25 to 30 of them each breeding season to monitor bird populations and assess the usefulness of management actions. They focus on a suite of grassland and early-successional species, including bobolinks, grasshopper sparrows and blue grosbeaks. Their data are then incorporated into the Virginia Breeding Bird Atlas, which maps the distribution and status of the state’s birds.

“Documenting the many species of birds on different properties is beneficial for the landowners because they may not know they have a rare sparrow or unique species nesting on their land,” says Tricia Booker, one of VWL’s first citizen scientists. “Some landowners are surprised by the number of birds they host, and it affects how they view and manage their property.”

“At the end of the day,” adds Peele, “everyone who owns private grassland habitat will be important and can play a key role in reversing these bird declines and creating a more sustainable landscape.” That’s reason enough for any bird to raise its voice in song.

“We always noticed the variety of wildlife that visited our farm,” says Beatrice von Gontard, a former member of the National Wildlife Federation’s board of directors. That involvement, she says, “made us aware of how important providing habitat in your backyard can be, whether it’s on 1 or 1,500 acres. We knew that if we developed certain land-use practices, we could really make a difference.” NWF programs such as Garden for Wildlife™, Cover Crop Champions, Adopt a Wildlife Acre and the Million Pollinator Garden Challenge teach people across the nation how to benefit wildlife. To learn more, go to www.nwf.org.


Matthew Cimitile is with the Appalachian Mountains Joint Venture, which works to protect birds.