Conservation can be a common ground for bipartisan collaboration 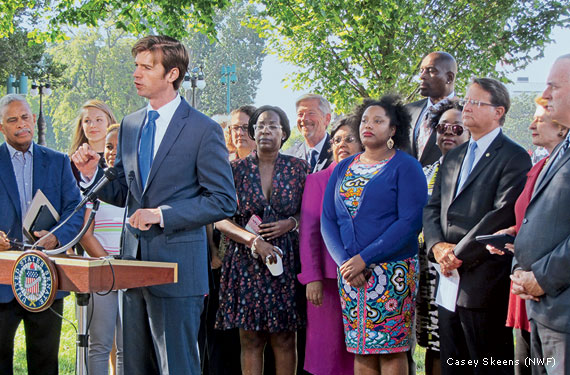 NOW THAT THE MOST RAUCOUS ELECTIONS IN RECENT MEMORY ARE OVER, Americans are hoping the parties can work together and find common ground. Wildlife conservation may be the best opportunity for such bipartisan action.

As former New York City Mayor Fiorello La Guardia once said, “There is no Democratic or Republican way of cleaning the streets.” We at the National Wildlife Federation believe the same about recovering America’s wildlife.

Public polls show bipartisan support for restoring natural resources. The joy that comes from breathing fresh air in a forest or fishing on a clean lake knows no partisan boundaries. Indeed, recent presidential candidates agreed that it is important to protect public lands and expand access to outdoor recreation. Our new president and Congress could likewise secure bipartisan consensus around the following:

With your support, we are working hard to remove the politics from these issues and make them higher priorities. Please join us as we work to make 2017 a banner year for wildlife!

Beyond Politics: Our Toughest Conservation Challenges
Empowering Americans Who Want to Help Wildlife
Song of Salvation: A Funding Plan for Wildlife
When Water is Gone
Outwitting the Storm: Bolstering Coastal Habitats Against Climate Change
Hardrock Mining Law Stuck in the Past
Read More President's Views