Farewell to the World’s Smallest Tarantula? 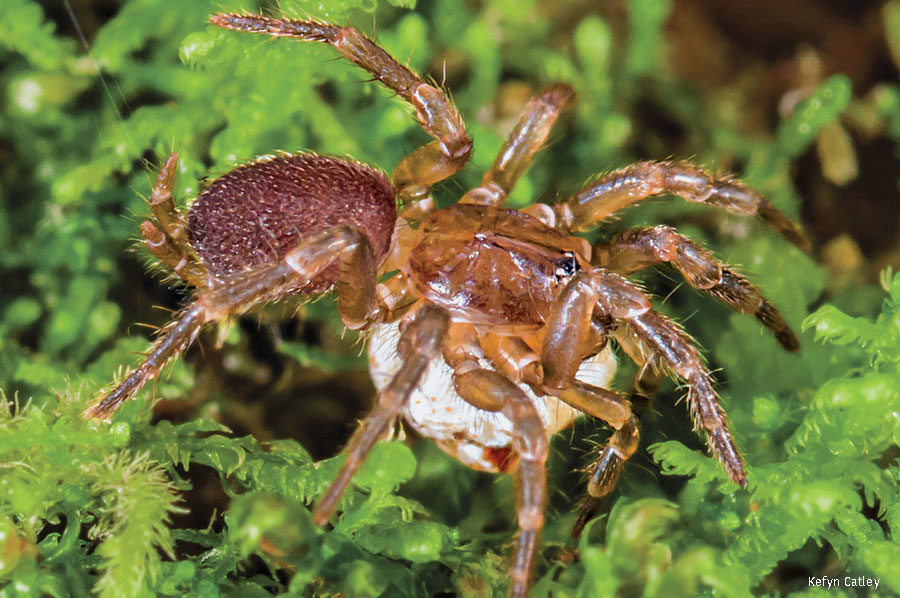 When biologist Kefyn Catley hikes the damp forests of Great Smoky Mountains National Park (GSMNP), he is often on the hunt. A professor at Western Carolina University (WCU), Catley studies the history and evolution of insects, but of particular interest to him is the future of one species of spider found only in a few isolated pockets of the Southern Appalachian Mountains: the endangered spruce-fir moss spider.

Roughly the size of a BB pellet, this species is the world’s smallest tarantula. In years past, Catley remembers finding the spider high on the moss-covered rock outcroppings that dot Clingmans Dome, a mountain straddling North Carolina and Tennessee. At 6,643 feet, it’s the highest peak in the park. There, spruce-fir forests provide the moisture and shade that nurture bryophytes (nonvascular plants, including mosses) growing on rocks, the elusive spider’s main habitat. But that habitat is in serious decline.

“In 1987, I could get out of the car at Clingmans Dome and identify rocks where I found the spiders, but they aren’t on the dome anymore,” says Catley. “They’ve disappeared.” He’s on a quest to learn if the decline is widespread—and reversible. 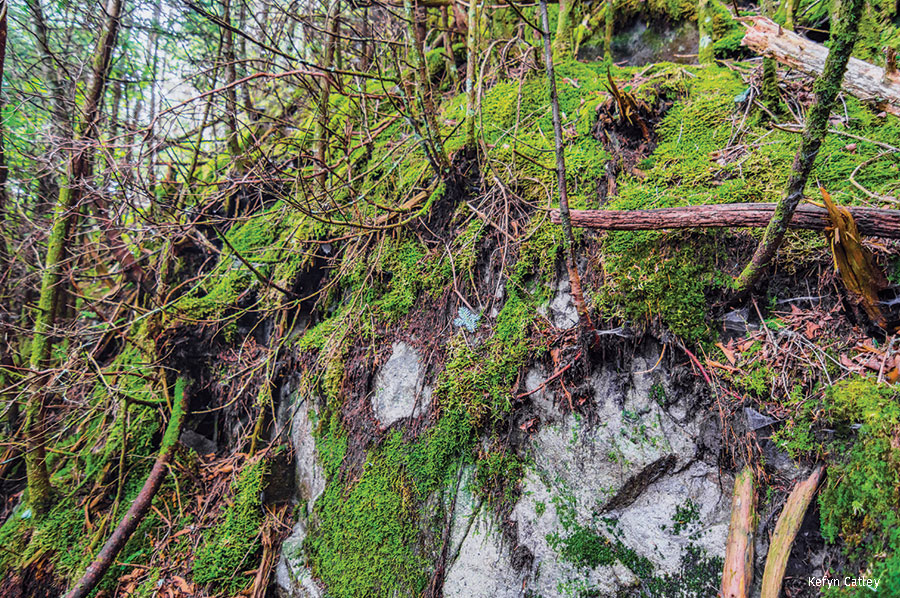 These tiny, endangered tarantulas live only under moss at cool, high elevations in the Southern Appalachians, where invasive insects, a warming climate and other threats are altering habitat to the point that scientists fear the spiders may not survive.

That survival now appears in jeopardy. Invasive insects are killing trees in the park, changing forest composition and depleting the canopy that provides shade and moisture. Temperatures are also on the rise. The result? “The spider is being pushed by habitat changes to peripheral areas such as north-facing rock slopes,” where cooler temperatures keep moss moist, says Catley.

In 1995, the U.S. Fish and Wildlife Service (FWS) added the tiny tarantula to the federal endangered species list, making it just one of three listed spiders (the others are the tooth cave spider in Texas and the Kaua‘i cave wolf spider in Hawai‘i). Catley fears that what’s happened at Clingmans Dome could happen elsewhere, making the listing moot. “If we lose this spider from southern Appalachia, it is gone from the planet. We still don’t know much about it, and it will have disappeared forever.” 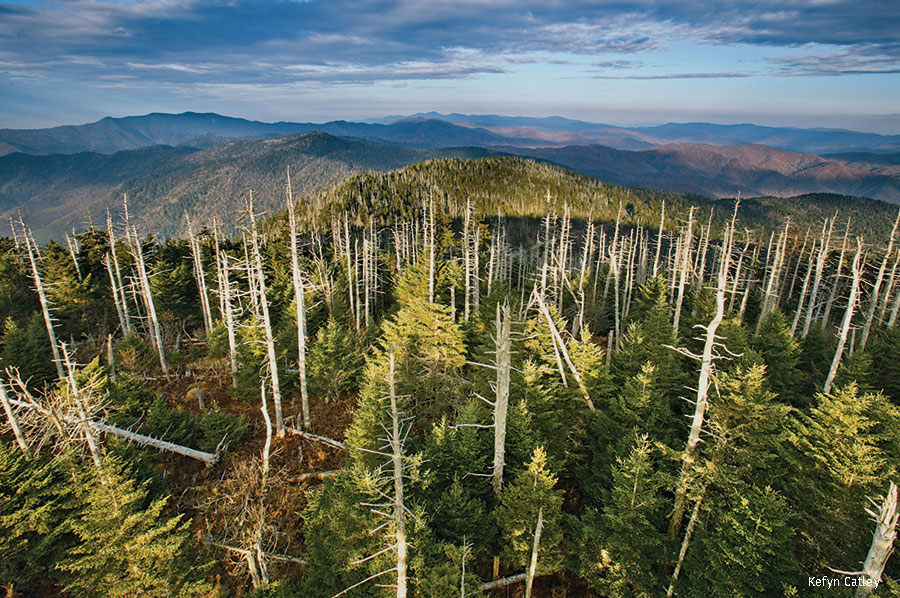 The denuded trunks of Fraser firs in Tennessee signal the deadly march of the balsam woolly adelgid, an invasive insect that has killed most Fraser firs in the Southern Appalachians. With the canopy gone, more heat and light dry out the mossy habitat of spruce-fir moss spiders.

The tarantula was first discovered on North Carolina’s Mount Mitchell in 1923. Much of what is known about it was uncovered by biologist Fred Coyle of WCU, who documented its population range in the 1980s and 1990s. But because of its diminutive size and concealed habitat—its funnel-like web is only visible when moss matting is pulled away from a rock—even biologists like Coyle and Catley, who specialize in arachnids, know little about its habits.

Scientists do know that spiders, as top predators, are key regulators of insect populations, and if one species disappears, its absence can have a cascading effect on ecosystems. Within its microhabitat, the spruce-fir moss spider is the top predator, eating mites and springtails. The latter are small insects that live in soil and leaf litter. “These are vitally important,” says Catley. “Without them, we’d have no plants because they start the recycling process.”

Unfortunately, spruce-fir and Fraser fir forests are being ravaged by the balsam woolly adelgid, an invasive aphidlike insect native to Europe with no natural enemies on this continent. In three to five years it can sap mature trees of their nutrients, leaving denuded, dying trunks in its wake. According to a 2014 FWS review on the spruce-fir moss spider, 95 percent of the Southern Appalachians’ mature Fraser firs have died because of the adelgid, which has “undoubtedly altered and limited the range of the spider.”

The deterioration of leafy canopy allows more heat and light into the forest, drying out moss and altering the delicate balance that dictates the survival or extirpation of the spider. Moss mats can also be destroyed by human trampling as well as by timber operations or traumatic single events such as violent storms or wildfires. 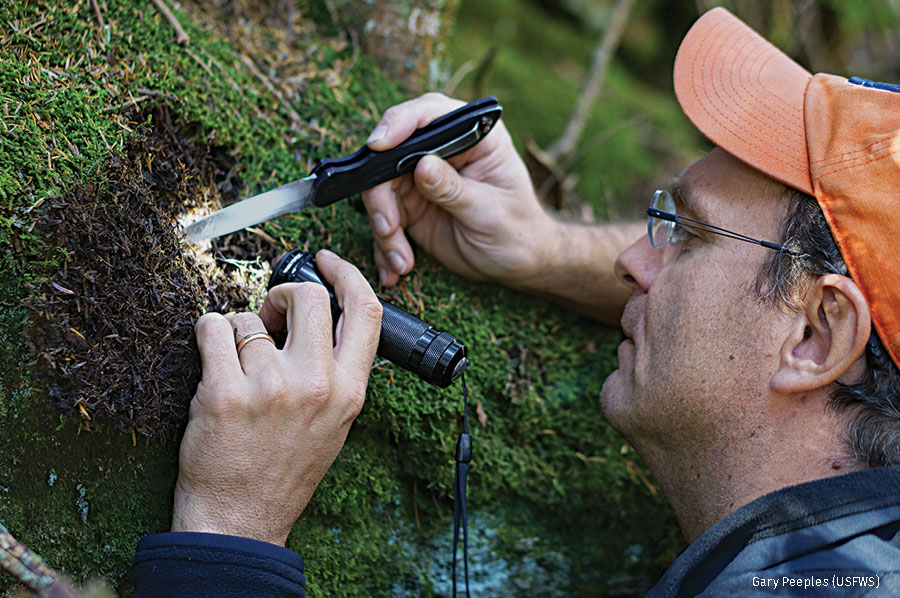 Biologists such as Jason Bond of Auburn University are searching for clues to help save the species.

Striving to save a spider

The National Park Service at GSMNP has mounted an aggressive campaign to chemically treat Fraser firs in hopes of slowing the adelgid and saving the habitat. Chemical pours and sprays effectively target the adelgid with minimal nontarget impacts and keep trees healthy, at least when initially treated. Regular surveys also are being conducted to ascertain the ongoing health of the spider’s habitat. But will these efforts be enough?

Recently, the GSMNP’s All-Taxa Biodiversity Inventory—an attempt to document all the park’s plant and animal species—identified 923 species that are new to science. While that news is exciting, it’s critical to determine how many species are disappearing due to ongoing habitat loss—and whether the spruce-fir moss spider will be among them.

Science writer Jane Schneider is based in Memphis, Tennessee.