Buggy housemates are ubiquitous, diverse and here to stay. 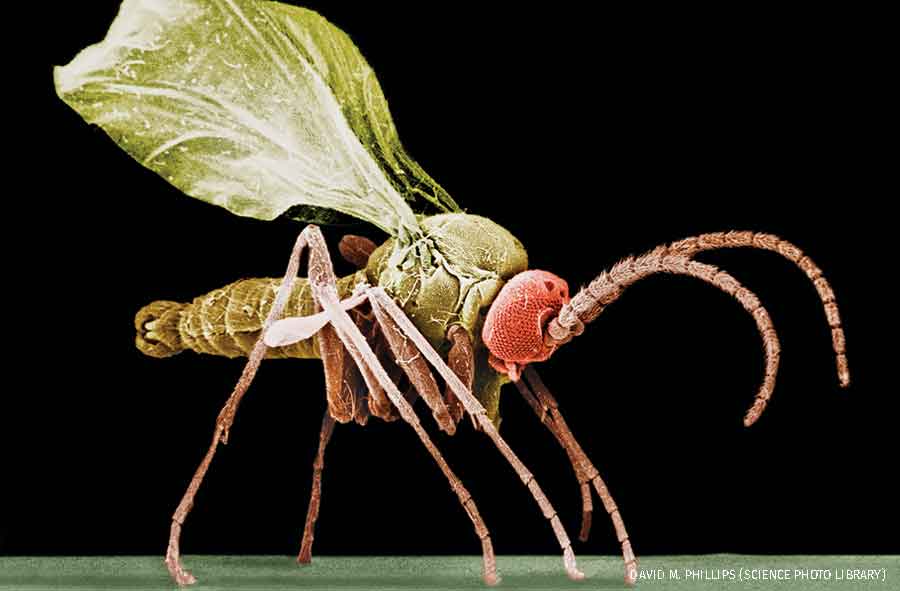 Magnified to reveal what’s often unseen, a fugus gnat (above) and dust mites on wool fabric (below, right) are likely sharing your home. A macro view of a carpet beetle (bottom, left) reveals what lies underfoot. Those pervasive pests eat dead plant and animal matter such as skin, wool, pollen, feathers, felt and leather.

PLEASE REMAIN CALM, but right now it’s likely that hordes of insects and their ilk from roughly 100 different species are living inside your house—and there’s not much you can do about it.

Last fall, in Scientific Reports, researchers from the California Academy of Sciences published a survey of 50 homes in and around Raleigh, North Carolina, part of a long-term, international study about the scope of indoor insect ecosystems.

Scooping up some 10,000 samples from basements, bedrooms, kitchens and attics in the homes, the researchers identified at least 579 species from 304 families of arthropods (invertebrates that include insects, mites and spiders). The team found ants, carpet beetles, gall midges and cobweb spiders in 100 percent of the homes, followed closely by booklice (which eat fungi and mold) and dark-winged fungus gnats. Other common guests included cellar spiders, scuttle flies and dust mites. Thankfully, more-harmful pests such as ticks, termites, fleas, American cockroaches and bedbugs were relatively rare.

The team wasn’t counting each individual critter, just each type. But entomologist Misha Leong, lead author of the study, guesses many homes house hundreds if not thousands of individuals. “We may think our homes are pristine bubbles against the outdoors,” she says, but “clearly, things are getting inside.” 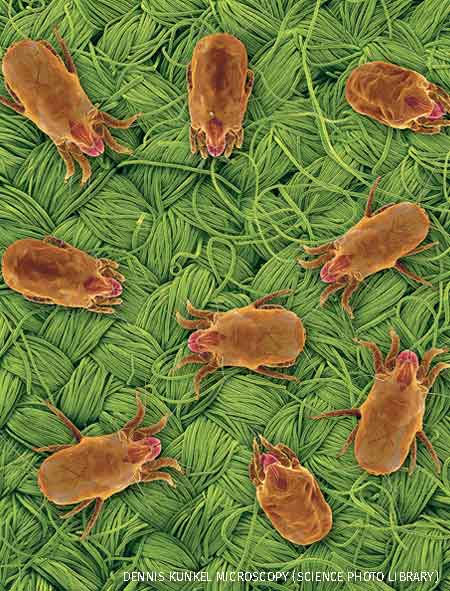 If you eschew vacuum or broom, it may please you to know that tidiness didn’t seem to affect the diversity of arthropod species found in homes. Neither did having plants or pets, though both will boost the absolute number of buggy guests.

What does influence diversity is how “wild” the nearby environment is (a woodsy property versus bare lawn, for example) and the number of windows and doors leading outside (more openings mean more types of bugs). Carpeting yields more species than hard floors, and downstairs rooms have more species than upper levels, with the most diversity in basements. Basically, if there’s water, food, hiding spots and a way in, critters will come.

Fortunately for the squeamish, the vast majority do no harm and may even do some good. According to Leong’s study, “Many of our chronic, modern diseases are associated with our failure to be exposed to biological diversity,” particularly from microbes that may be vectored by insects. So, “rooms with more kinds of arthropods may well be healthier rooms.”

In that light, consider putting away the bug spray and get to know some of the common visitors under your roof.

• Ubiquitous ants. They’re a nuisance, but not a danger. Scouts come in first, looking for drips and crumbs and leaving a pheromone trail for relatives to follow. (Some species seek sugar, others grease, and all need water.) Caulking up entry points can thwart ants. Some baits and non-toxic products such as boric acid can reduce numbers, and vigilant cleaning, especially in the kitchen, can wipe away food and the telltale pheromone trail.

• Silent spiders: In the United States, black widows and brown recluse spiders are dangerous to people, but most other spiders are do-gooders, trapping pests such as flies and mosquitoes. Many species have become “synanthropic,” meaning “with humans,” says University of California–Riverside entomologist Rick Vetter. Shielded from weather and natural predators, they’ve specialized to thrive under roof. More pro than con, consider leaving them to their work. 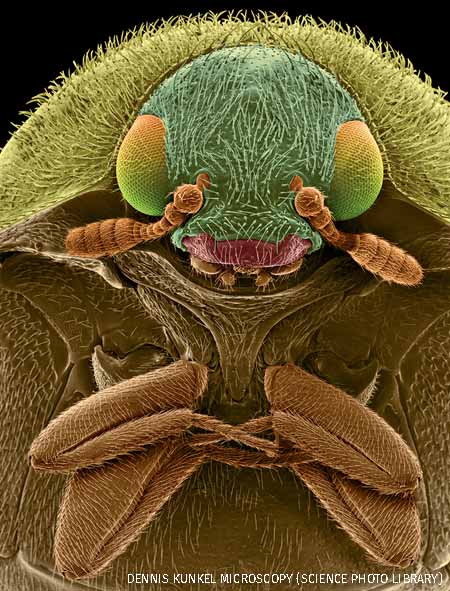 • Storage wards. Tiny moths can contaminate oatmeal or ruin a sweater. Dry goods may house eggs of the Indian meal moth, for example, whose larvae chew through packaging, leaving a mess of silk and frass (waste) behind. They’re very common “because more people are buying organic and in bulk,” says University of Maryland entomologist Michael Raupp. “If you’re not using the food fast enough, you’re letting eggs hatch rather than unknowingly eating them.” (And yes, we do eat plenty of them, though with no ill effect.) Airtight food containers and vacuum-sealed clothing bags can stop the spread of moths, and pheromone traps will shrink their numbers. Consider freezing bulk products and sweaters to kill eggs before storing.

• Meet the beetles. Like moths, carpet beetles can also chew holes in your woolens. The bristly larvae lurk under carpet edges and in dark closets and attics, eating plant and animal fibers, including wool, silk, fur and cereals. They usually ignore synthetics (so your polyester sofa is safe). Adult carpet beetles nibble flowers, and some species are colored and patterned like butterflies. To stop the larvae, vacuum well, get rid of infested fabrics and follow the rules for thwarting moths.

Ultimately, housing buggy critters requires “tolerance,” says entomologist Ed Vargo of Texas A&M University. “In the industrialized world, that tolerance is very low.” But, unless indoor insects are hazardous to home or health, a new attitude toward bugs is due. “They’re simply part of nature’s repertoire,” says Raupp. “We’ve invaded their realm; we shouldn’t be surprised when they invade ours.”

Jennifer S. Holland wrote about hurricanes in the August-September 2018 issue.