In New Mexico, a community takes a rare and little-studied bird species under its wing. 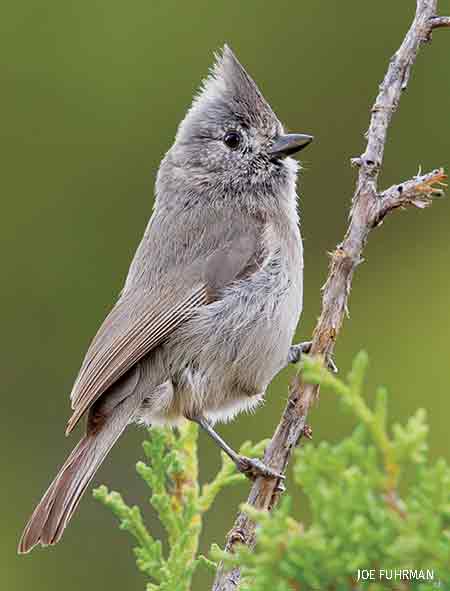 To provide nesting sites for the juniper titmouse (above), high school students built 70 nest boxes, personalizing each box (below) with their names and other markings.

SINCE IT WAS CLASSIFIED as a separate species two decades ago, the juniper titmouse has lived in relative obscurity in the southwestern United States. Few biologists have studied the animal, so many aspects of its life cycle remain a mystery. Today, however, the little gray bird is getting some overdue notice from a group of citizen scientists in New Mexico, home to an estimated 42 percent of its total population.

This attention may be coming just in time, says Don Wilson, team leader of a National Wildlife Federation Community Wildlife Habitat™ in the Santa Fe suburb of Aldea. As many of New Mexico’s mature piñon-juniper woodlands have been cleared or degraded by drought, he explains, the tree cavities titmice need for nesting have declined. So have the birds’ numbers in the state—by some 1.3 percent annually in recent years. Today, the New Mexico Department of Game and Fish classifies the bird as a “species of greatest conservation need.”

To help the titmice that live year-round in Aldea—a 345-acre subdivision with more than half its land permanently protected—wildlife biologist and community resident Peggy Darr devised a plan in 2016 to provide nesting sites for the birds. As the plan’s first step, Wilson enlisted students at a nearby high school to build 70 nest boxes specifically designed to meet the species’ requirements. Residents mounted the boxes on their properties’ juniper and piñon trees. Wilson recorded the latitude and longitude of each tree with a box, then plotted the data on maps so members of a local birding club could later check for nests, eggs and hatchlings. 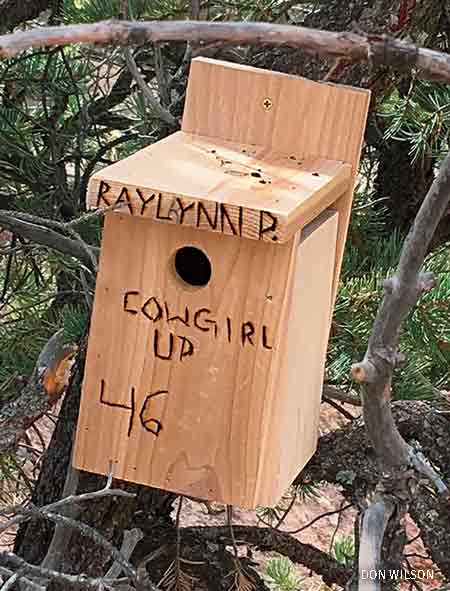 That spring, club members began monitoring the nest boxes throughout the breeding season. After two seasons, and as they prepare to launch a third, these volunteers have recorded a heartening 131 titmouse fledglings hatched in the boxes.

They are also sharing their observations with the Cornell Lab of Ornithology’s NestWatch project, a nationwide effort that tracks the status and reproductive trends of native bird species. “The Aldea group quickly became our primary source of information about the juniper titmouse,” says NestWatch Project Leader Robyn Bailey. In 2016 alone, Aldea’s birding club supplied 92 percent of the data Cornell received for this species, allowing researchers to begin quantifying the amount of time the birds incubate their eggs and how long after hatching before baby birds fledge.

“What the residents of Aldea are doing is rare and special,” Bailey says. “It just goes to show that a small group of concerned citizens can make a real contribution to scientific knowledge about a species.”

Set up a Nesting Box in Your Yard »
New Mexico Wildlife Federation: The Juniper Titmouse Nest Box Project »
Map Your Garden for Wildlife Efforts – One Yard at a Time! »
NWF Community Wildlife Habitats »