A Farewell to Lawns

Native turf-grass alternatives can reduce your environmental footprint while supporting birds, butterflies and other living creatures. 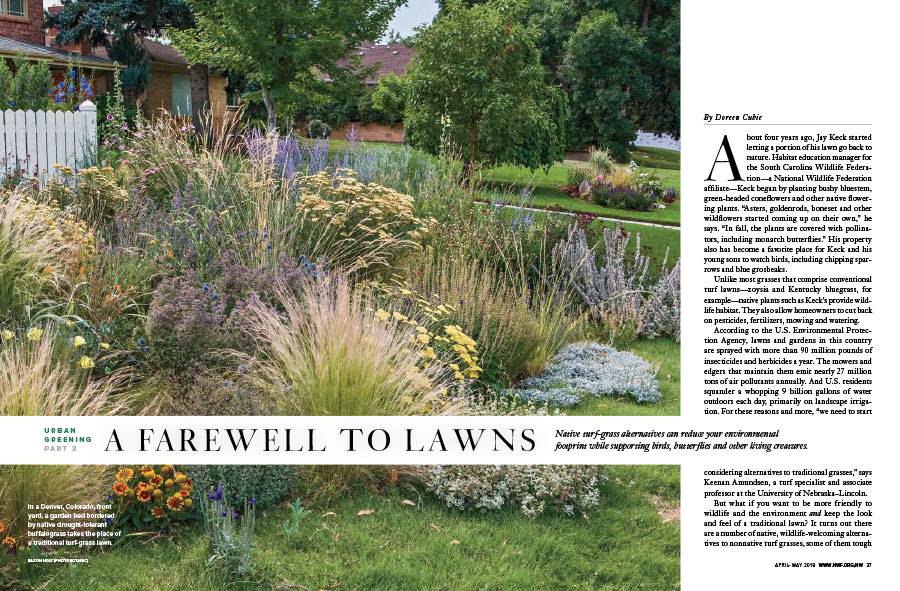 In a Denver, Colorado, front yard, a garden bed bordered by native drought-tolerant buffalograss takes the place of a traditional turf-grass lawn. Native substitutes for turf lawns include (below from top to bottom) sedges, mosses and bearberry. All three provide benefits to wildlife, ranging from caterpillars and spiders to salamanders, hummingbirds and other small pollinators. The key to success is to choose plants that are indigenous.

ABOUT FOUR YEARS AGO, Jay Keck started letting a portion of his lawn go back to nature. Habitat education manager for the South Carolina Wildlife Federation—a National Wildlife Federation affiliate—Keck began by planting bushy bluestem, green-headed coneflowers and other native flowering plants. “Asters, goldenrods, boneset and other wildflowers started coming up on their own,” he says. “In fall, the plants are covered with pollinators, including monarch butterflies.” His property also has become a favorite place for Keck and his young sons to watch birds, including chipping sparrows and blue grosbeaks.

Unlike most grasses that comprise conventional turf lawns—zoysia and Kentucky bluegrass, for example—native plants such as Keck’s provide wildlife habitat. They also allow homeowners to cut back on pesticides, fertilizers, mowing and watering.

According to the U.S. Environmental Protection Agency, lawns and gardens in this country are sprayed with more than 90 million pounds of insecticides and herbicides a year. The mowers and edgers that maintain them emit nearly 27 million tons of air pollutants annually. And U.S. residents squander a whopping 9 billion gallons of water outdoors each day, primarily on landscape irrigation. For these reasons and more, “we need to start considering alternatives to traditional grasses,” says Keenan Amundsen, a turf specialist and associate professor at the University of Nebraska–Lincoln.

But what if you want to be more friendly to wildlife and the environment and keep the look and feel of a traditional lawn? It turns out there are a number of native, wildlife-welcoming alternatives to nonnative turf grasses, some of them tough enough for kids and the family dog to play on. These turf alternatives include:

Buffalograss. Originally found across the Great Plains and into the foothills of the Rocky Mountains, buffalograss was the mainstay of bison herds. Native across the central part of the country, it’s a good choice for homeowners looking for “a tough, durable alternative to cool-season grasses,” says Scott Vogt, executive director of the Dyck Arboretum of the Plains in Hesston, Kansas. “It is also very drought tolerant. The arboretum has 2 to 3 acres of buffalograss that do just fine with no irrigation.” Another plus: Many native bees, pest-killing parasitic wasps and other beneficial insects take up residence in buffalograss.

Several buffalograss cultivars, many developed at the University of Nebraska, are for sale in nurseries. “One of my favorites is Prestige,” says Amundsen. Available as sod or plugs, it is a brighter green color than older varieties. Regardless of the variety, a buffalograss lawn seeded in late spring will have completely covered your yard by autumn if the area is properly prepared. 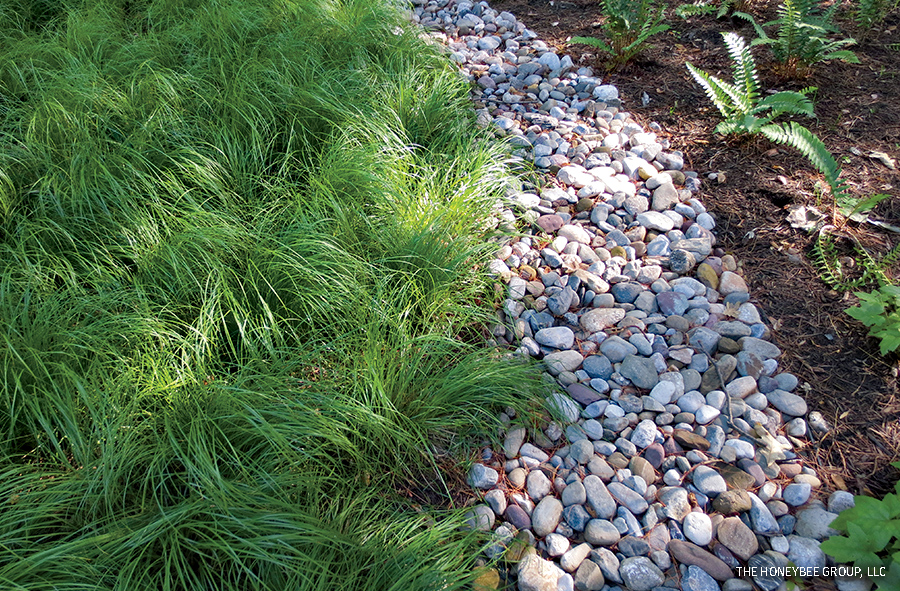 Sedges. Hundreds of species of these native grasslike plants are found in North America. “Many sedges grow best in wet areas,” says Neil Diboll, president of Prairie Nursery in Westfield, Wisconsin, “but there are others that thrive in well-drained or sandy soils or even clay.” One of the most popular varieties is Pennsylvania sedge. Native from New England and the Appalachian Mountains and foothills to most of the Midwest, it has a creeping habit and grows only 6 inches high, making it an ideal turf replacement. This variety also hosts several caterpillar species.

Native to the West and Great Plains, clustered field sedge is another option. “It is very popular,” says Rob Moore, owner of California Native Landscape Design in Orange County, California. Easily found in nurseries, this sedge requires significantly less water than traditional grasses, he adds. It also is pest resistant. Depending on where you live, other sedges to consider include Texas Hill Country sedge and Baltimore sedge.

Though sedge lawns can withstand some light foot traffic, they do not hold up well to softball games and other child-intensive activities. Diboll says the seeds also can be difficult to germinate, so sedges are usually planted from plugs—making the plants much more expensive than traditional turf lawns and best used in smaller areas. Nor are sedges the best choices for someone who wants an instant lawn because they are slow to spread. 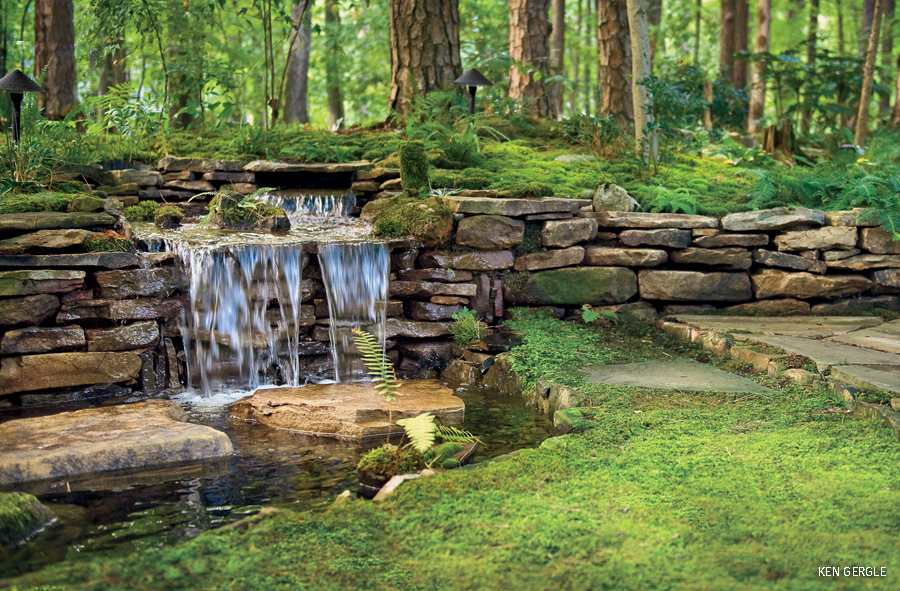 Mosses. If you do want an instant lawn, roll out a few 6-foot-by-6-foot native moss mats, suggests Annie Martin, owner of Mountain Moss Enterprises in North Carolina and author of The Magical World of Moss Gardening. “Mosses are an often-overlooked landscape choice,” she says, and are especially useful to homeowners with lots of shade. Yet contrary to conventional wisdom, “many mosses tolerate a certain amount of sun.” They’re also good for erosion control and create a natural water-filtration system, slowing down rain as it moves into the groundwater table. And “they are habitat for an array of beneficial insects, spiders, worms and salamanders,” Martin says. “Birds gather mosses for their nests.” The plants keep their color all year long, she adds. “They don’t die back in the winter.”

Moss is ideal for places where nothing else grows. Anna Osborne, who lives in Asheville, North Carolina, had moss planted in a muddy spot in her backyard. “It is a nice alternative to turf and is low maintenance,” she says. “I don’t have to cut it, just weed a little. And it’s pretty,” Osborne adds. “It is several different shades of green.” 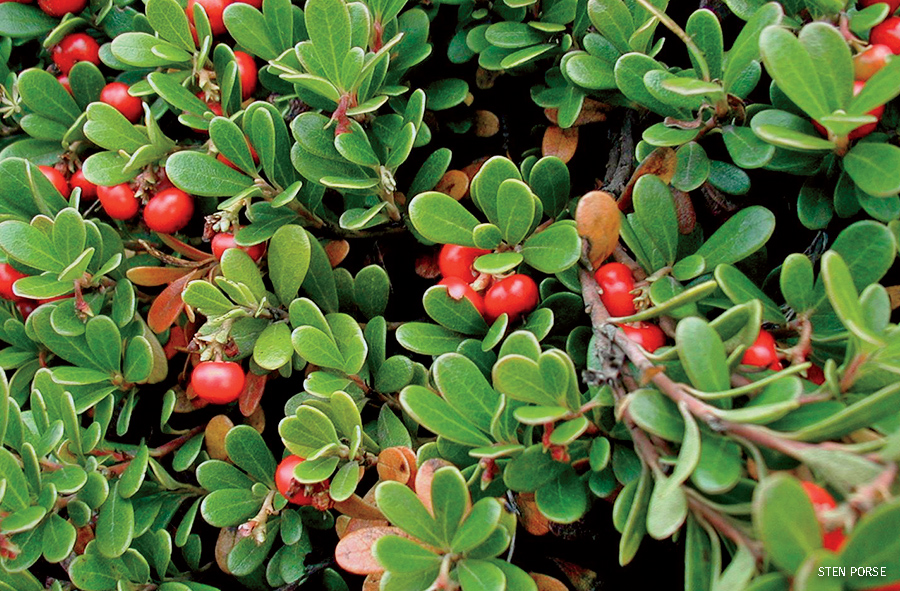 More options. Beyond buffalograss, other grasses native to the United States include blue grama (western North America), seashore bentgrass (the Pacific Coast states as well as Montana and Idaho), curly mesquite grass (Texas to Arizona) and red fescue (west of the Rockies as well as New England south through the Appalachian Mountains). Some nurseries also sell no-mow blends of grass seed, but make certain all of the seed is indigenous to your part of the country.

If you want a less-traditional look, dozens of nongrass ground covers are available. Leonard Perry, University of Vermont extension professor emeritus, suggests bearberry, which is easy to grow and has both berries and dainty, white-to-pink flowers that attract hummingbirds and other pollinators. Bearberry is native to the northeastern and mid-Atlantic states, the Upper Midwest and mountains from New Mexico north through California to Alaska.

Two more options Perry recommends are lowbush blueberry and creeping juniper. Neither look like lawns, but they are low growing, attractive and beneficial to wildlife. Lowbush blueberry, which produces fruit sought both by birds and people, has an extensive native range from eastern and central Canada south through the northeastern and Great Lakes states and down the mountains to North Carolina and Tennessee. Among creeping junipers, Perry likes a cultivar called Blue Rug, which grows only 6 inches high but can spread 6 to 8 feet wide. He says it works in many climates, including high deserts with extremely variable temperatures.

Whatever alternative you choose, select plants that are native to your region of the country and suited to your yard’s moisture, light and soil conditions. Another key to success is to carefully prepare the area before you plant. “You need to totally eradicate the original cover,” says Vogt. While this often is done with herbicides, other approaches include renting a sod cutter to remove the grass; smothering existing lawn by covering it with black plastic, old rugs or boards; or tilling the soil several times—steps best started a season or two before you’re ready to plant.

This may sound like a lot of work, but replacing a conventional lawn brings tangible benefits—to homeowners as well as to wildlife. Keck, for instance, is eyeing another section of his property and considering removing the grass. “I spend a lot of time mowing,” he says. “If I take out more lawn, I will have more time to be with my family.”

Doreen Cubie wrote about preventing disease at bird feeders in the February–March 2019 issue.