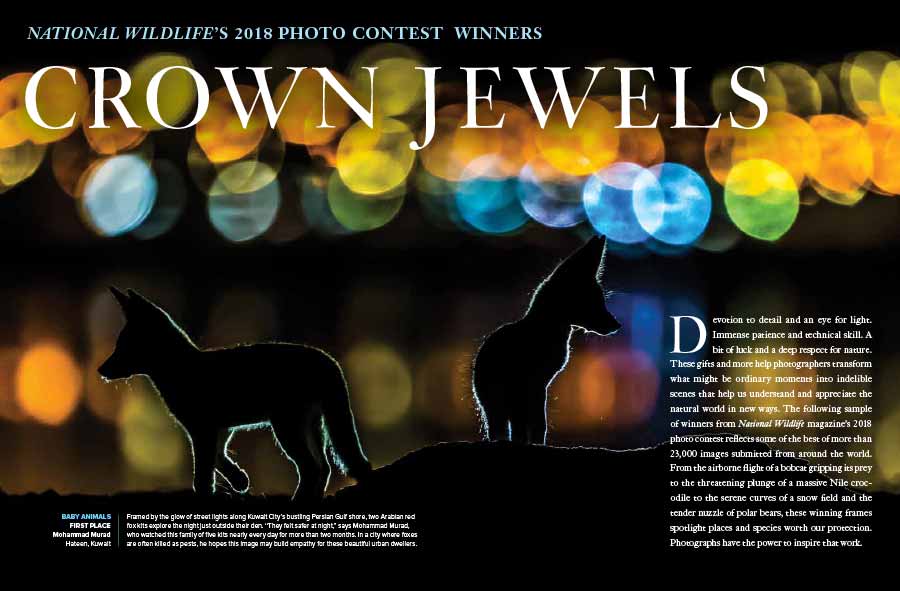 DEVOTION TO DETAIL and an eye for light. Immense patience and technical skill. A bit of luck and a deep respect for nature. These gifts and more help photographers transform what might be ordinary moments into indelible scenes that help us understand and appreciate the natural world in new ways. The following sample of winners from National Wildlife magazine’s 2018 photo contest reflects some of the best of more than 23,000 images submitted from around the world. From the airborne flight of a bobcat gripping its prey to the threatening plunge of a massive Nile crocodile to the serene curves of a snow field and the tender nuzzle of polar bears, these winning frames spotlight places and species worth our protection. Photographs have the power to inspire that work. 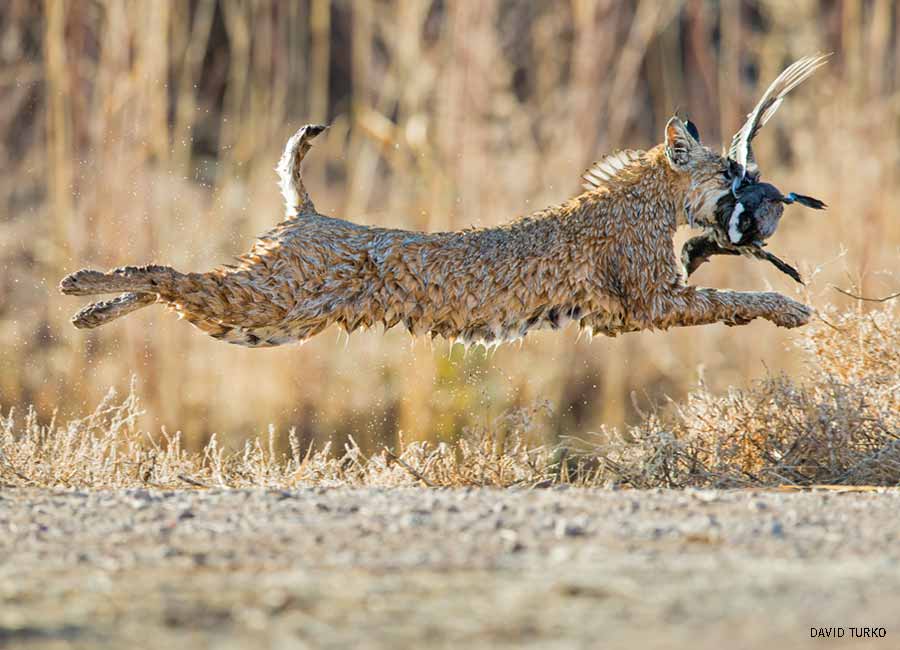 As spray flies from sopping fur, a bobcat flees from the pond where it snagged its prey—an unsuspecting coot, its wings still flapping in its last moments of life. Photographer David Turko caught this unforgettable moment after making an unplanned detour on a visit to New Mexico’s Bosque del Apache National Wildlife Refuge, where he was photographing migratory birds. Following a “hunch,” Turko turned down a back road and prepared his camera settings, hoping “something might happen.” That’s when he saw the cat. Turko was able to exit his car and start shooting unseen because the bobcat’s vision was obscured by the coot’s flapping wings. When the cat spotted him, it “increased its pace to a full sprint, then just made this leap,” he recalls. “It was surreal. I still get goose bumps thinking of it. This was the shot of a lifetime.” 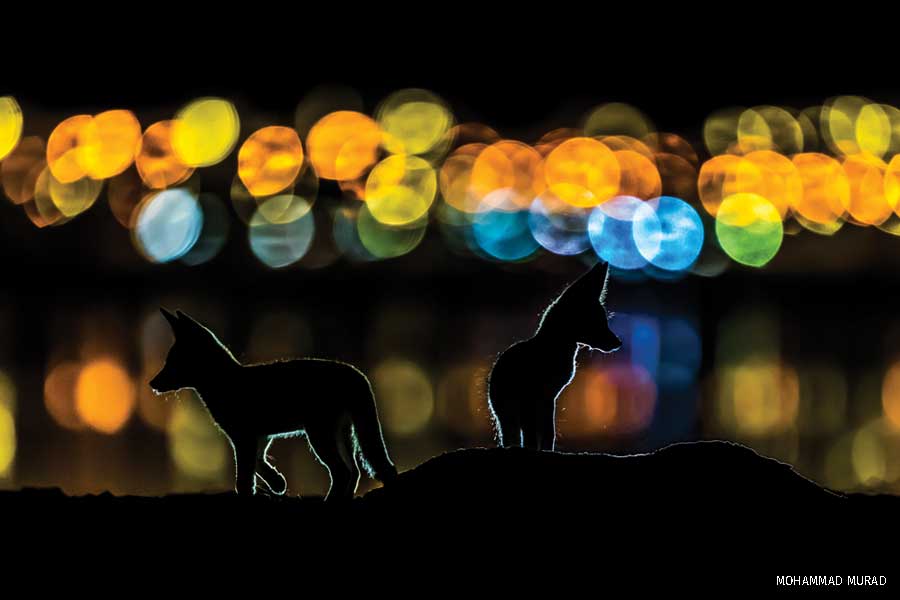 Framed by the glow of street lights along Kuwait City’s bustling Persian Gulf shore, two Arabian red fox kits explore the night just outside their den. “They felt safer at night,” says Mohammad Murad, who watched this family of five kits nearly every day for more than two months. In a city where foxes are often killed as pests, he hopes this image may build empathy for these beautiful urban dwellers. 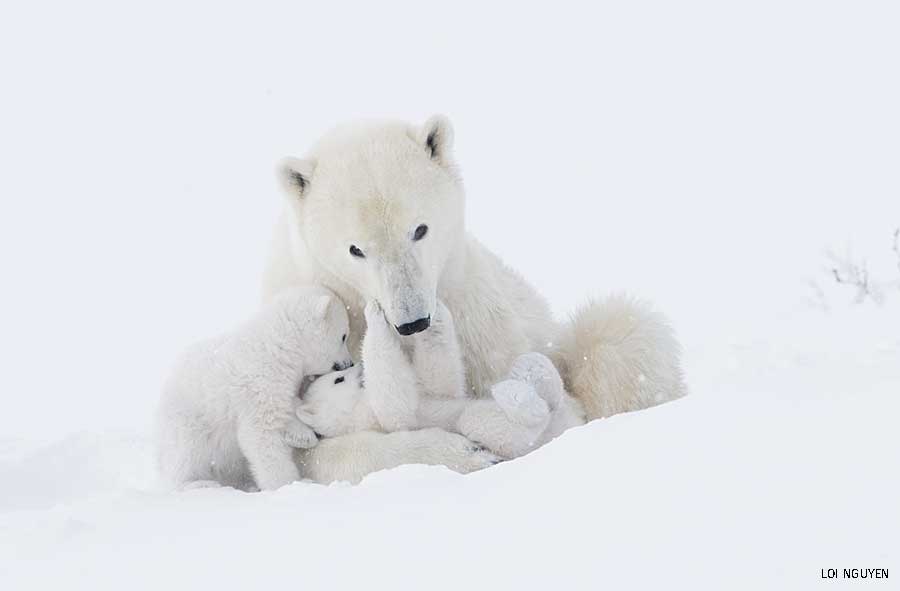 After two years of planning, Loi Nguyen landed a coveted permit to visit Canada’s Wapusk National Park in hopes of photographing polar bears heading to Hudson Bay. Long days of waiting paid off when his group spied this mother and her two cubs, curled in a sleeping ball. When they awoke, the cubs nursed, nuzzled and played. “There is such tenderness between mother and cubs,” says Nguyen. “It melts me.”

“Animals are not that different than we humans. They have families, and feelings.”
—Loi Nguyen 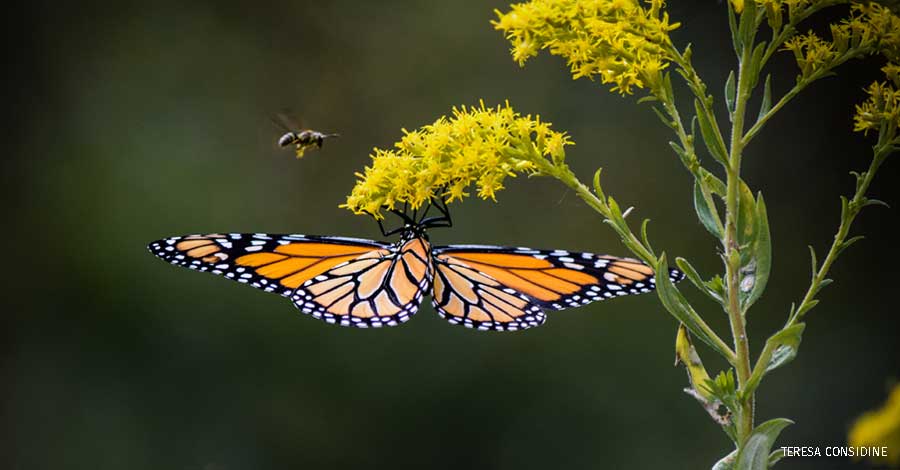 On a late summer day in her Illinois backyard, photographer Teresa Considine watched a wasp repeatedly “buzz” a monarch butterfly sipping nectar from goldenrod. To avoid its apparent tormenter, the butterfly gracefully flipped upside down to continue feeding undisturbed—a moment Considine was thrilled to capture. “I love how butterflies represent transformation,” she says. “It’s about not being afraid to live your life as you would normally live it, no matter how brief.” 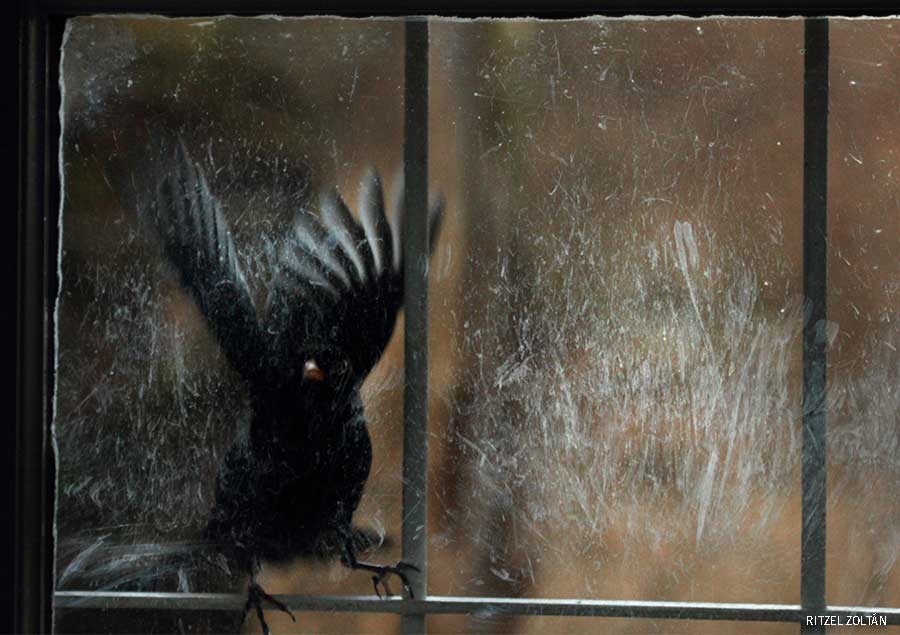 A common blackbird in southern Hungary battles its own reflection in a cottage window as photographer Ritzel Zoltán records the action. “This homestead is surrounded by a small forest,” he says. “Many birds live nearby, and some need to protect their territory.” Throughout the winter, this bird would arrive early in the morning to “do some training,” says Zoltán. “If he got tired, he’d take a break, and when the sun rose, he’d fly away.” After disappearing for days, he’d return—a lesson, perhaps, in perseverance. 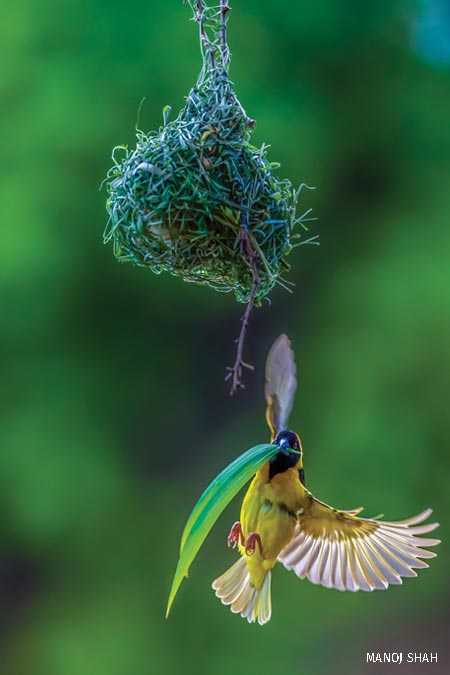 With a dancer’s grace and unlimited drive, a male black-headed weaver brings yet another blade of grass to build his nest in Kenya’s Maasai Mara National Reserve. “He worked nonstop from sunrise to sunset,” says photographer Manoj Shah, who watched the bird for a week as it created this home to attract a mate. “I love how the fanned wings hit the light.” Such are the moments that patience rewards. 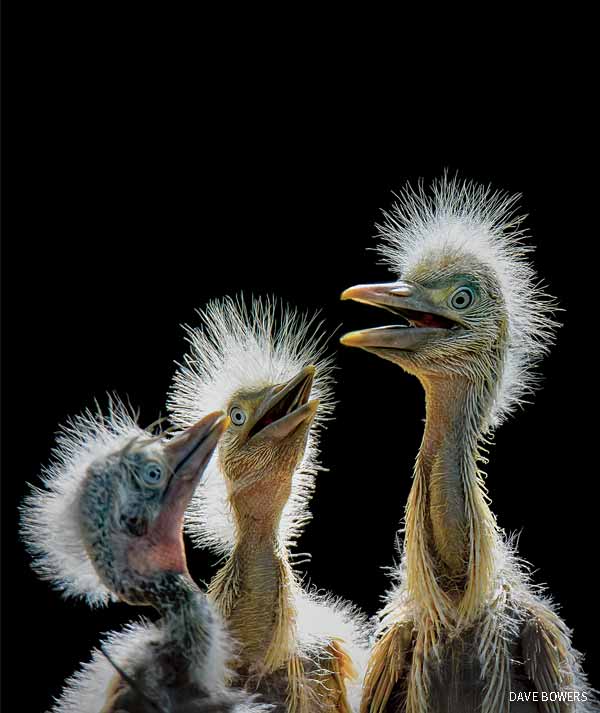 Late-day light casts a halo of feathers on baby great egrets nesting together in a rookery in St. Augustine, Florida. Having seen these bobbing heads from a distance of some 30 feet, photographer Dave Bowers waited for what he hoped would be a magical moment. “I wanted eye contact, which creates emotion,” he says. “I like to humanize the natural world. That makes people care about nature and want to preserve it.” 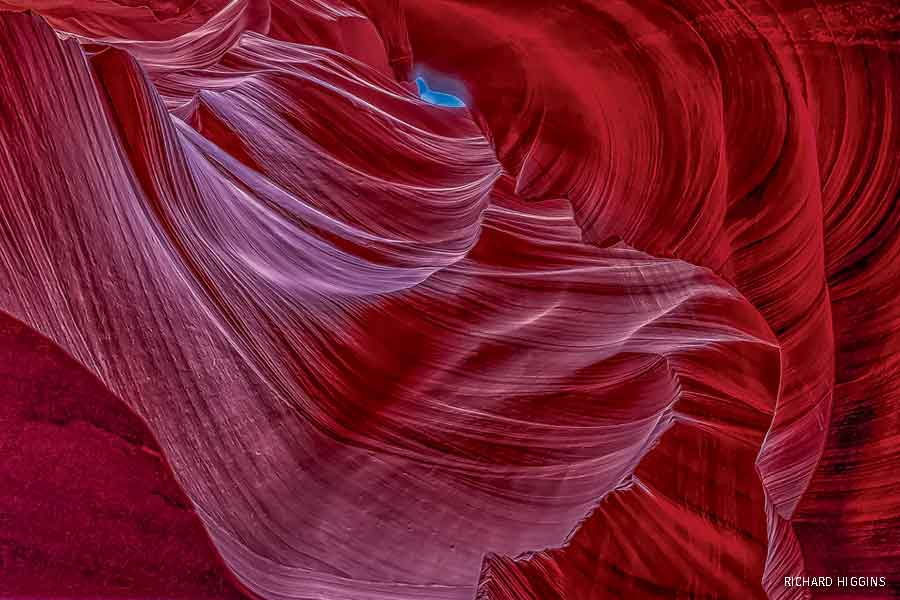 Sinuous curves of damp sandstone come into vivid relief as light from a spring sky spills into Upper Antelope Canyon in Arizona. Pleased that a night of rain enhanced contrast in the rock, photographer Richard Higgins used “exposure bracketing” of five images to create this artful portrait. “I love the way the colors, curves and textures of the rocks are all right there to tell the whole story,” he says. 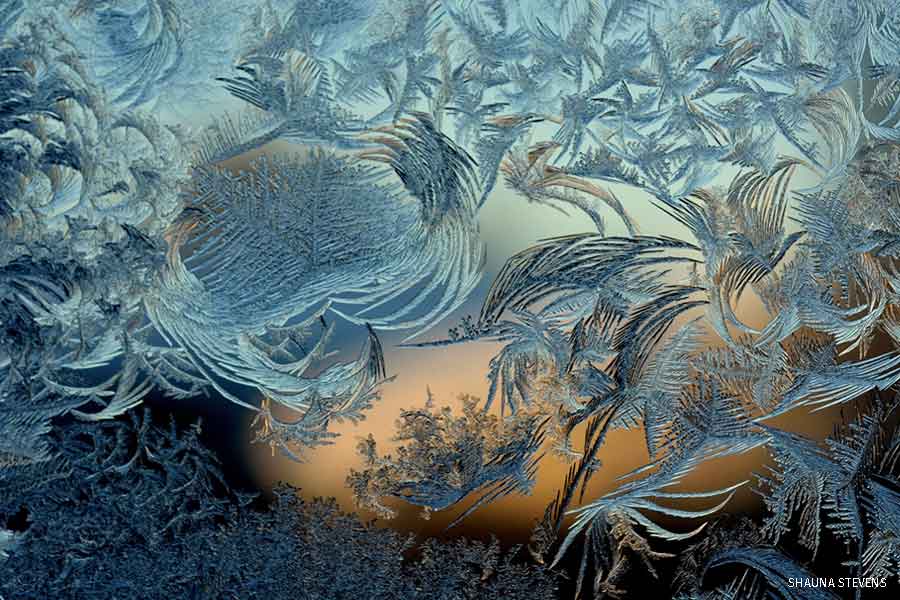 Some people might see just a frozen window. But when photographer Shauna Stevens wandered past this icy pane as the sun set on a frigid January day, she saw a swirling landscape of ice, its crystals painting a portrait of grasses, trees and sky. “It’s very gratifying to capture the essence of something just a little odd,” says Stevens, who took this photograph during a particularly painful time in her life. “This will always remind me of the beauty that surrounds us regardless of our personal struggles.” 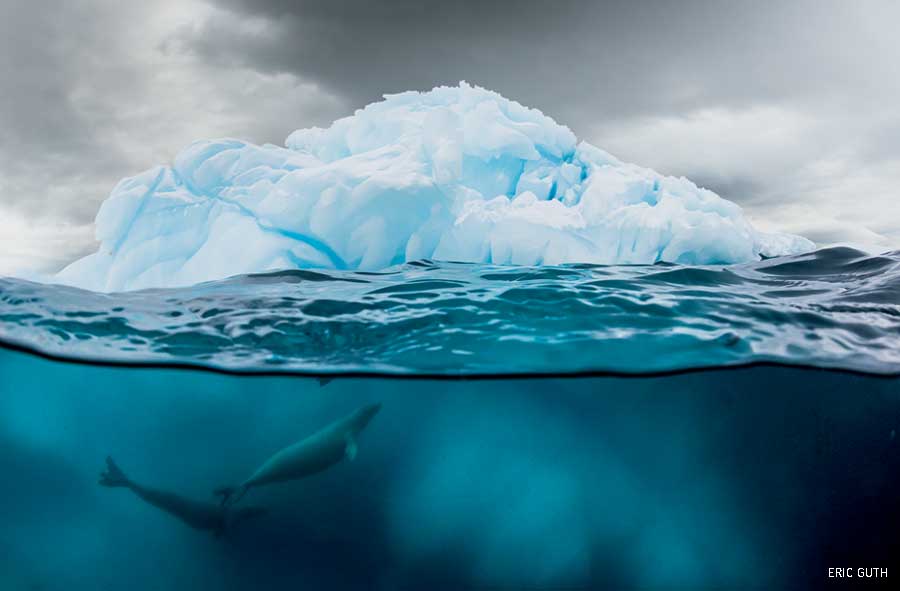 Riding a small Zodiac off the coast of Brown Bluff in Antarctica, photographer Eric Guth housed his camera in a dome port and dipped it into the sea, hoping to capture an over-under shot of a massive iceberg. When a group of crabeater seals swam into the frame, they graced the image with unexpected magic. “I feel calm and at peace when I look at this,” Guth says. “The seals give it life.” 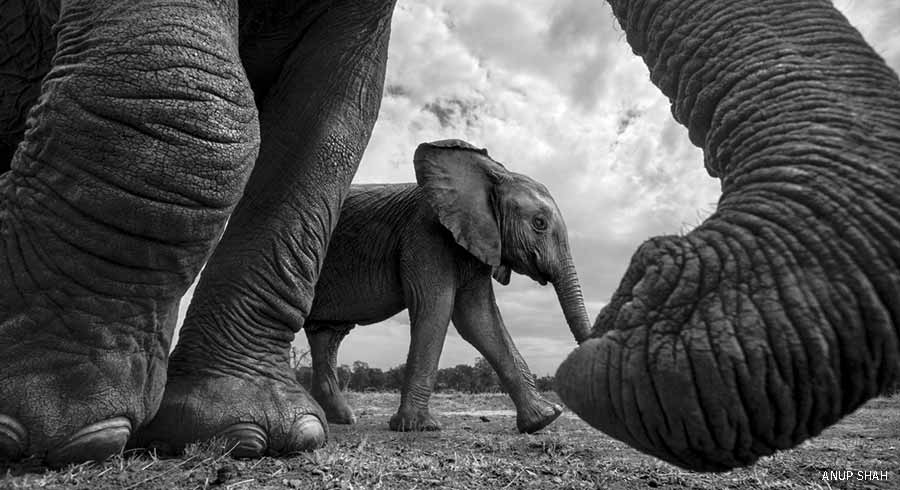 Leathery skin and scruffy earth contrast with the tender sight of a baby elephant framed within its mother’s massive girth. Photographer Anup Shah caught the pair in Kenya’s Maasai Mara National Reserve, where he was working on his book, The Mara. “To me, photography like this is about value. How do we value nonhumans who are like us, yet unlike us, and share the same planet?” 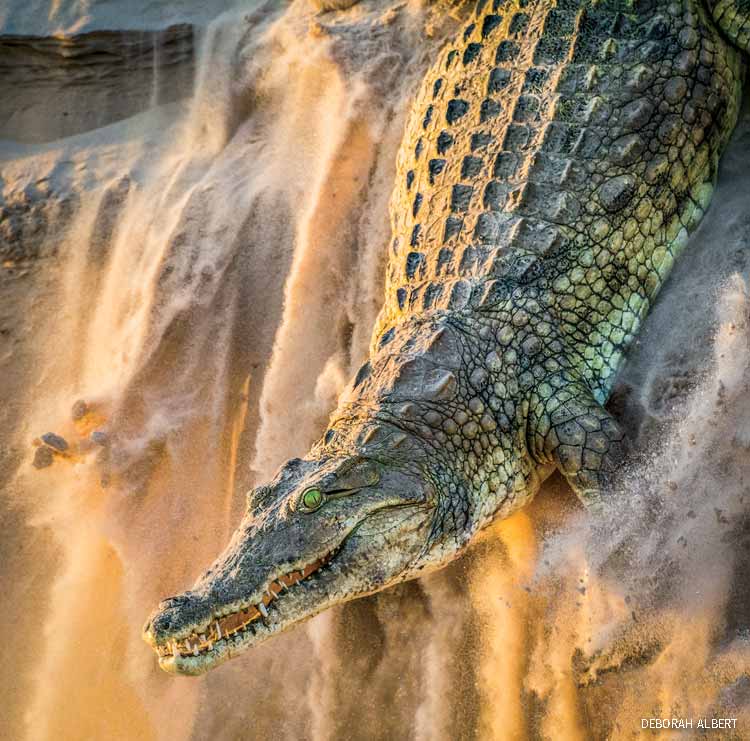 While slowly moving along Tanzania’s Rufiji River in a tiny boat, Deborah Albert suddenly saw a massive Nile crocodile plunging down a sandbank toward the water. Twisting her body, she caught a few frames before the croc submerged and vanished. “It was a bit intimidating,” she admits. Yet this “wildlife fanatic” praises the croc’s prehistoric majesty. “Talk about wildlife perfection.” 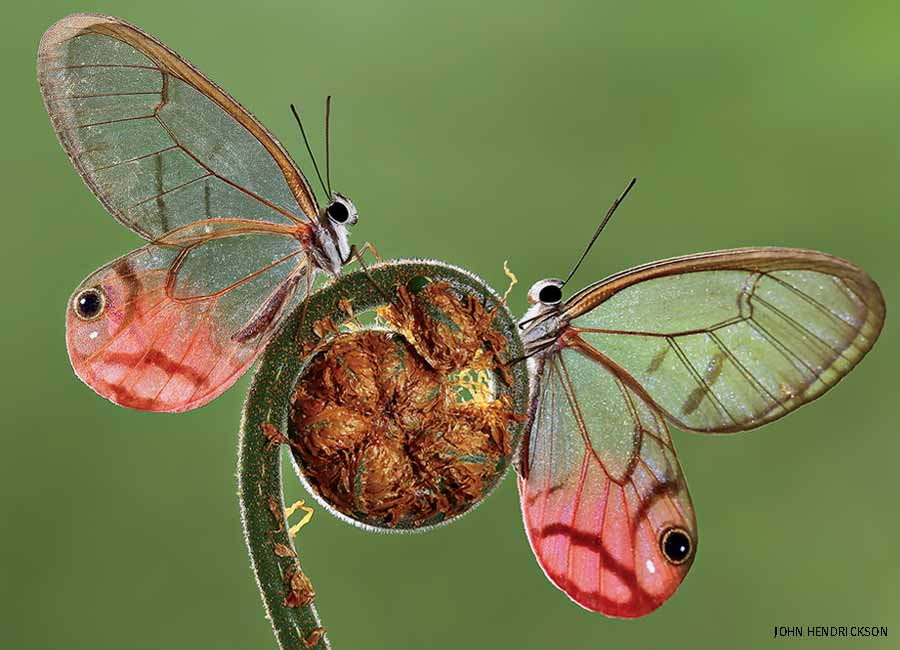 A delicate face-off unfolds as two clear-winged Satyrid butterflies perch on a fiddlehead fern in Costa Rica’s Rio Tuis Valley. A lifelong butterfly lover, photographer John Hendrickson saw several of these creatures feeding on rotting palm fruits on the forest floor. Lying on his belly to shoot, he was delighted when these two appeared together, a lyrical glimpse of symmetry in nature. “Seeing two butterflies backlit like this, it was an amazing moment.” 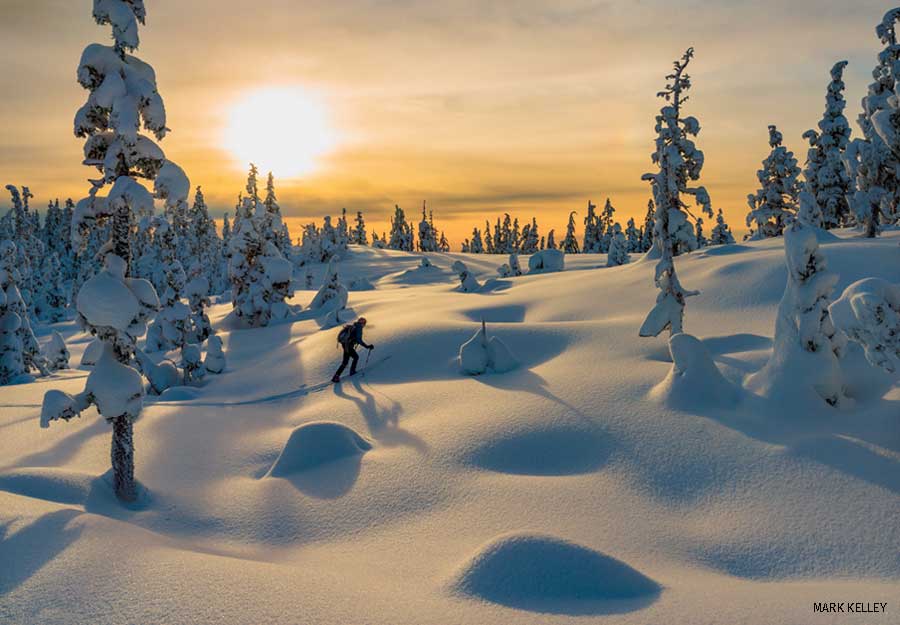 A solitary skier moves in perfect peace through fresh powder as low-lying winter sun casts sensuous shadows across Spaulding Meadows in Juneau, Alaska. “I love how my wife’s shadow bends in the curve of the snow,” says photographer Mark Kelley. “It was so incredibly beautiful, with sunlight flowing across these lush mounds. For us, this conveys an amazing sense of serenity.”

“I want people to say, ‘Wow. This is Alaska. This is what we need to keep.’”
—Mark Kelley 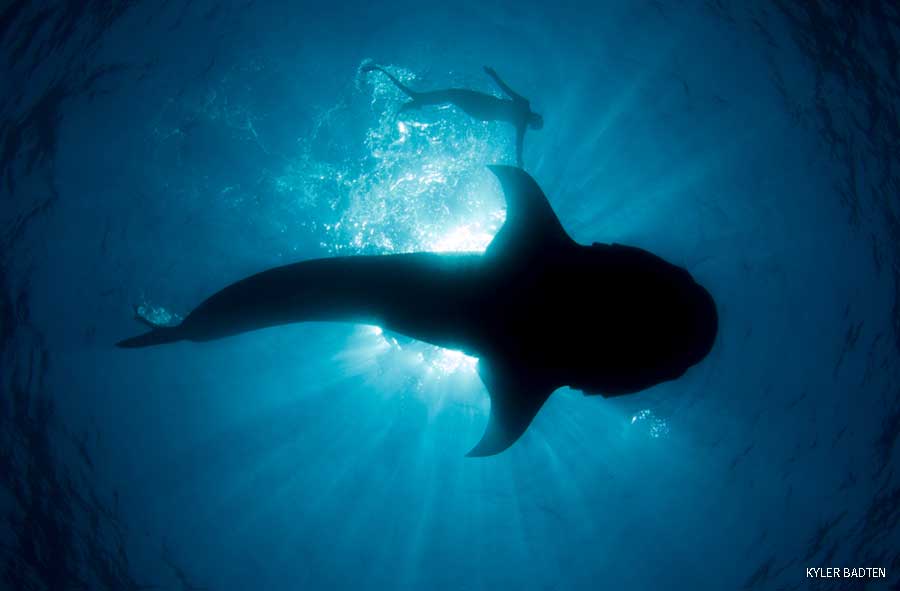 Literally holding his breath to get the shot he envisioned, photographer Kyler Badten hovered some 30 feet below the surface of Caribbean waters off the coast of Mexico’s Isla Mujeres. Vision became reality when a whale shark passed overhead, just below diver Akira Biondo, whose outstretched hand appears to be gently touching the animal below her. “I call this ‘Coexist,’” says Badten, who hopes images like this will call attention to the plight of sharks worldwide and “inspire others to help protect them.”