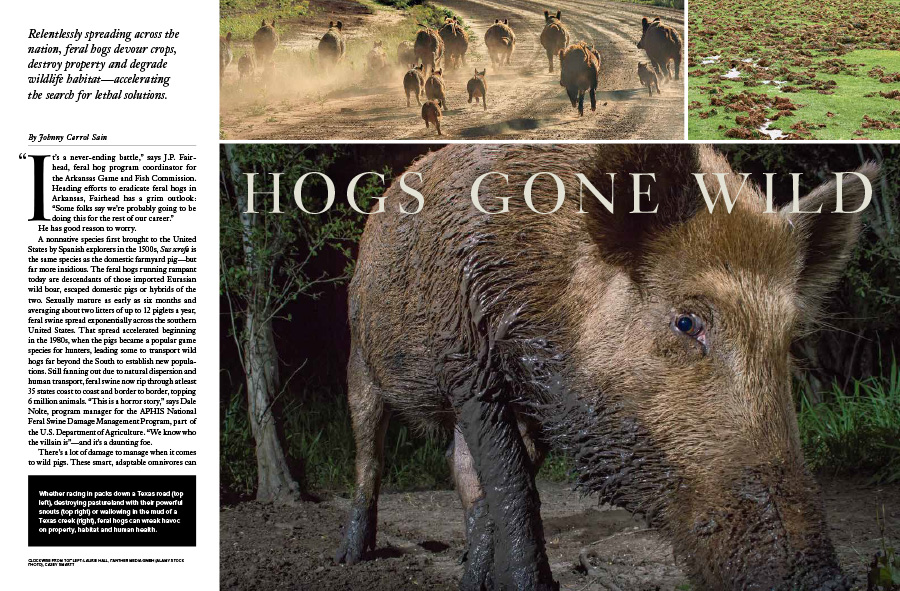 Whether racing in packs down a Texas road (top left), destroying pastureland with their powerful snouts (top right) or wallowing in the mud of a Texas creek (right), feral hogs can wreak havoc on property, habitat and human health.

"IT’S A NEVER-ENDING BATTLE,” says J.P. Fairhead, feral hog program coordinator for the Arkansas Game and Fish Commission. Heading efforts to eradicate feral hogs in Arkansas, Fairhead has a grim outlook: “Some folks say we’re probably going to be doing this for the rest of our career.”

He has good reason to worry.

A nonnative species first brought to the United States by Spanish explorers in the 1500s, Sus scrofa is the same species as the domestic farmyard pig—but far more insidious. The feral hogs running rampant today are descendants of those imported Eurasian wild boar, escaped domestic pigs or hybrids of the two. Sexually mature as early as six months and averaging about two litters of up to 12 piglets a year, feral swine spread exponentially across the southern United States. That spread accelerated beginning in the 1980s, when the pigs became a popular game species for hunters, leading some to transport wild hogs far beyond the South to establish new populations. Still fanning out due to natural dispersion and human transport, feral swine now rip through at least 35 states coast to coast and border to border, topping 6 million animals. “This is a horror story,” says Dale Nolte, program manager for the APHIS National Feral Swine Damage Management Program, part of the U.S. Department of Agriculture. “We know who the villain is”—and it’s a daunting foe.

There’s a lot of damage to manage when it comes to wild pigs. These smart, adaptable omnivores can live just about anyplace and eat anything, from crops, insects and grasses to eggs, small animals, even fawns and calves. Rooting with powerful snouts, they can dig up a freshly planted corn row in a single night and destroy lawns, fences and roads. They carry at least 30 viral and bacterial diseases and 40 parasites that can sicken wildlife, livestock and people with ills such as brucellosis and tuberculosis. And their rooting and wallowing destroys wildlife habitat, pollutes water sources, prevents forest regeneration and threatens the survival of native species. All in all, feral hogs in this country cause more than $1.5 billion in damage a year. 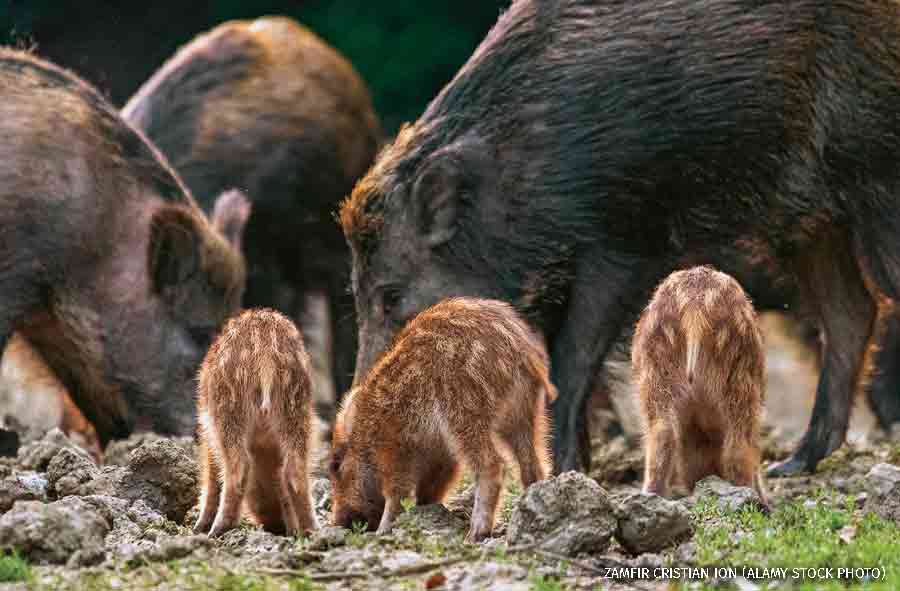 With omnivorous appetites for anything from crops and grubs to acorns and baby livestock, feral hogs and their offspring relentlessly root for food (above), destroying property and causing some $1.5 billion in U.S. damage each year. Able to bear young before age one, the hogs may have up to 12 piglets in a litter and two or even three litters a year, contributing to the rapid spread of pigs to at least 35 states.

The toll on wildlife and habitats is especially worrisome. According to APHIS, feral swine have hastened the decline of nearly 300 U.S. native plant and animal species, many of them already at risk. Hogs gorge on the nests of threatened sea turtles from Florida to Texas, root out native milkweed vital to monarch butterflies and other pollinators, destroy ground nests for game birds such as bobwhite quail, foul the breeding ponds of the endangered Houston toad and vacuum up acorns and other forest mast that sustains bears, squirrels, wild turkeys and deer. Basically, “if something has a carbon molecule, they can eat it,” says biologist and feral swine expert Tyler Campbell of the nonprofit East Foundation.

If nothing is done to eradicate feral hogs or at least slow their spread, “they’ll end up in all but the very driest and coldest counties in the U.S.,” says Kurt VerCauteren, feral swine and ungulate project leader at the APHIS National Wildlife Research Center. Fortunately, the arsenal of tools to combat these invaders is growing. Some states allow sport and market hunting, with hogs sold to wholesalers who ship the USDA-inspected meat worldwide. Aerial shooting from helicopters is increasingly common, though it’s costly and requires open topography where pigs are visible. New remote-controlled traps can be extremely effective: Operators can lure an entire sounder, or herd, with bait to acclimate the pigs, then monitor the trap by cell phone. When notified that the trap is full, they can trip the trapdoor from miles away. But the catch, if you will, is that you must catch and kill every member of the herd. “If even one sow and one boar escape,” says Fairhead, “you could be right back where you started within a year.” 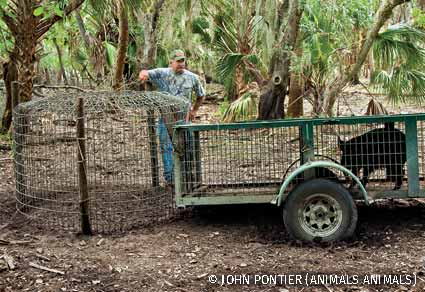 Though researchers have tested some hog contraceptives, experts agree that lethal control is the only way to prevent the catastrophic spread of feral swine. “You have to knock down 70 percent of a population a year just to maintain the status quo,” says David Yeates, CEO of the Texas Wildlife Association. He should know: With more than 1.5 million feral hogs, Texas has by far the largest population in the country.

There and elsewhere, wildlife and agricultural managers are debating the newest lethal tools: toxicants. In 2017, the U.S. Environmental Protection Agency approved Kaput Feral Hog Bait, which contains warfarin, a common anticoagulant people take to reduce blood clots. Tests show that warfarin causes internal hemorrhaging that effectively kills feral swine. But multiple concerns must be addressed before states allow its use. For one, hogs are sloppy eaters, and spilled warfarin bait can attract nontarget wildlife species such as birds and rodents. In addition, poisoned hogs can take days to die, which many deem inhumane. And dead or dying hogs also pose a risk to scavengers and perhaps to people, though a chemical in Kaput turns hog fat blue so hunters would know if a hog has been poisoned. Even so, “we do not encourage human consumption because of disease issues,” says Nolte. A few states allow animals to be processed and sold as food, but Nolte advocates eradication rather than “providing economic motive to maintaining an invasive species.”

A newer potential tool in hog control, sodium nitrite is proving effective at quickly killing pigs without leaving toxic traces that would harm carrion feeders. The hitch: Managers still need bait containers with lids that only hogs are strong enough to open, and they need to solve the spillage problem. Once those issues are solved, “this toxicant shows a lot of promise,” says Yeates. Many wildlife managers agree, hoping that toxicants will eventually become safe tools that can be integrated into feral hog management. 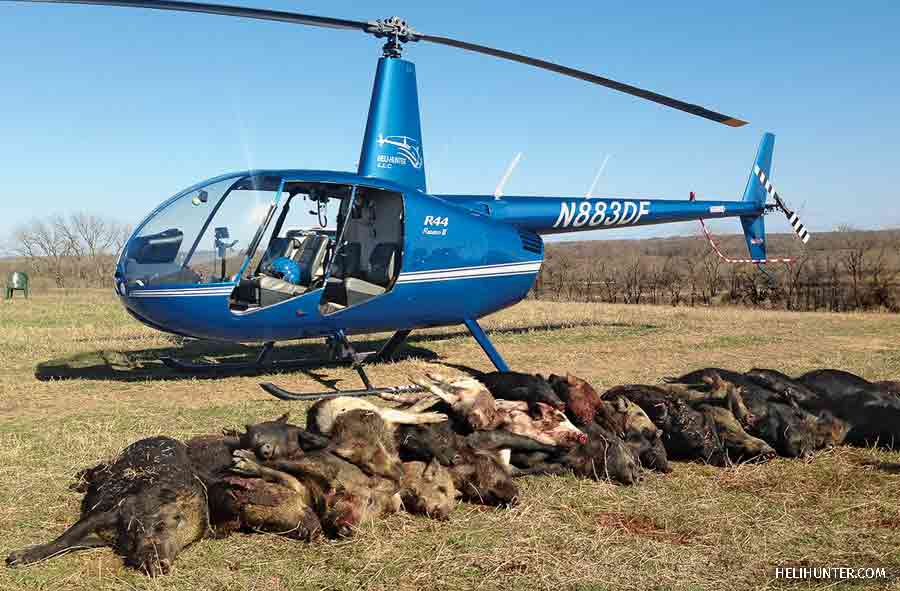 Professional trappers (top, in Florida) help control numbers, but trapping can be costly and slow. In Texas, Heli-Hunter (above) is one of scores of companies that charge clients up to $15,000 to shoot hogs from the air, but the death toll can’t keep pace with the pigs.

Science shows that when feral swine are removed, native wildlife can thrive. A study published in the Journal of Experimental Marine Biology and Ecology, for example, showed dramatic results after feral pig control began on Cayo Costa, a barrier island off western Florida and prime habitat for ground-nesting least terns and loggerhead sea turtles. In the two years after hog control began, turtle nest predation plummeted from 74 percent to 15 percent. The number of turtle nests jumped from 57 to 143, and least tern nests soared from eight to 208.

Back in Arkansas, Fairhead’s desk sports a wood-based trophy of a feral hog with the words, “No Pig Left Behind.” Most wildlife professionals share this goal—total eradication of wild pigs. But getting there will take a coordinated effort, educating the public not to transport hogs among states and using every tool available, perhaps including toxicants. Fairhead is dubious about that one. “My opinion is that the general public is going to have a hard time poisoning a large mammal,” he says. “The easiest thing is not necessarily the best thing. But I firmly believe we can beat pigs back as long as we all get on board, collectively, with what works. This problem didn’t happen overnight. It’s not going to be solved overnight.” For wildlife’s sake, it needs to be solved soon.

In 2017, NWF affiliates—including the Texas Conservation Alliance (TCA), Louisiana Wildlife Federation and Alabama Wildlife Federation—passed a resolution urging state and federal agencies to do more research on the toxicant warfarin before using it to kill feral hogs, mainly because of fears it could harm native wildlife that eat poisoned bait or dead pigs. Eradicating feral pigs is the goal because the problem is “horrible,” says TCA Executive Director Janice Bezanson, but “we need a solution that’s safe for wildlife.”