More than 1 million animal and plant species could vanish in the coming decades, but we can avoid dire outcomes if we all act quickly. 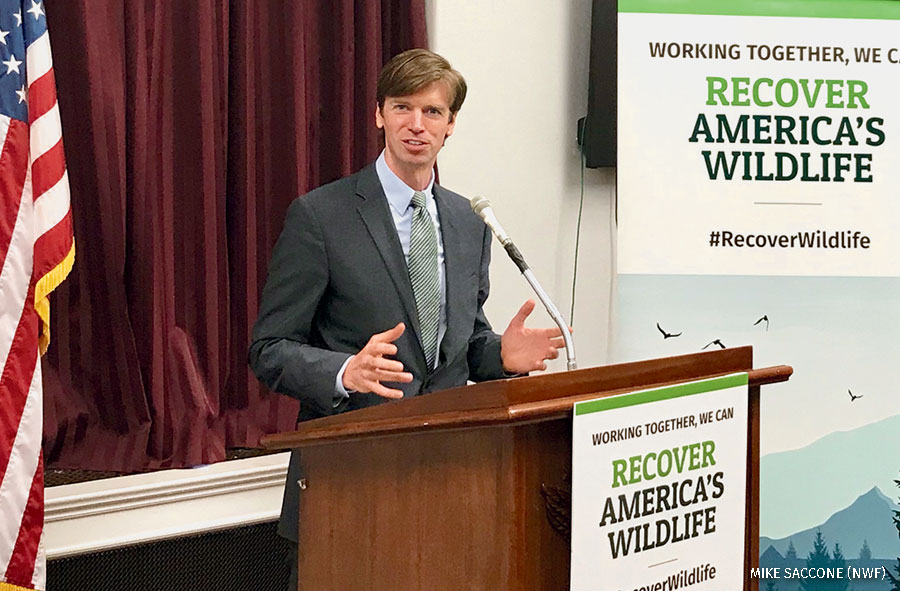 On Capitol Hill, Collin O’Mara addresses the press just before introduction of the Recovering America’s Wildlife Act, which will provide conservation funding.

LIKE MANY OF YOU, I take solace in nature, heading outdoors with my family to explore, breathe, cast a fishing line or hike a trail. That’s a source of pure peace. But for me, that peace is rocked by the scale of the biodiversity crisis facing our nation today.

This is part of Earth’s unfolding sixth mass extinction, in which, according to a recent United Nations assessment, more than 1 million animal and plant species could vanish in the coming decades. The causes of this crisis vary in different parts of the world, but in the United States, the key drivers of species declines are habitat loss, invasive species, disease and the impacts of a shifting climate.

We can avoid dire outcomes—and even reverse species declines—if we all act quickly and decisively. In July, Representatives Debbie Dingell (D-MI), Jeff Fortenberry (R-NE) and a bipartisan coalition of more than 60 of their congressional colleagues introduced the Recovering America’s Wildlife Act (H.R. 3742), game-changing legislation that will provide steady, guaranteed funding for state wildlife agencies to tackle their toughest conservation challenges. Working with our state and territorial affiliates and more than 1,000 other conservation partners, the National Wildlife Federation is leading the charge to ensure passage.

The legislation is built upon the premise that an ounce of prevention is worth a pound of cure. Simply put, it’s more effective and less costly to recover at-risk wildlife populations through proactive action before a species is on the brink of extinction. The bill invests in proven, collaborative solutions outlined in State Wildlife Action Plans such as restoring, reconnecting and improving the resilience of essential habitat, removing invasive species, preventing the spread of new diseases and reducing toxic pollution.

Given Washington’s gridlocked politics, we ask for your help to turn this legislation into law. Please contact your U.S. senators and representatives to tell them you support this bill. Share our social media posts or create your own. Write a letter to your local paper and encourage others to support the effort. This is your chance to give wildlife a chance. Please act now!