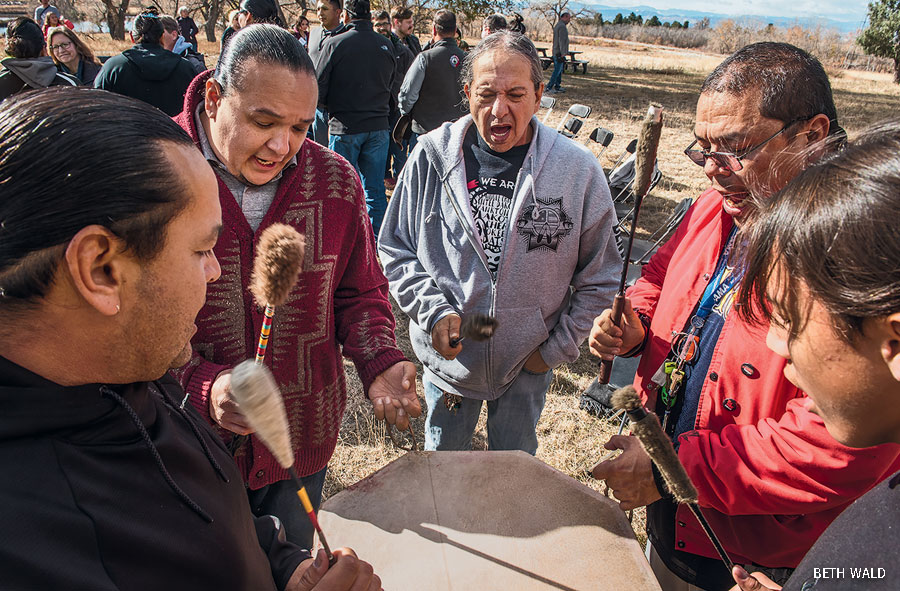 FIVE MEN SHARED A SINGLE DRUM as they rhythmically beat on it and chanted, their voices echoing across the plains of Rocky Mountain Arsenal National Wildlife Refuge in Denver, Colorado. The drum circle was part of a celebration signaling the end of the first biannual Tribal Buffalo Conservation Summit, held in November 2018.

Bison, called buffalo by Native Americans, are central to the culture of plains tribes. Members of the Eastern Shoshone Tribe, now living on the Wind River Reservation in Wyoming, call themselves “gweechoon deka,” or buffalo eaters. For them and others, the near annihilation of bison during westward expansion was devastating. “Our grandparents used these animals for food, clothing, shelter and tools,” says Jason Baldes, the National Wildlife Federation’s tribal buffalo coordinator and a member of the Eastern Shoshone Tribe. “But more important, philosophically, we have a spiritual connection to buffalo as a gift from the Creator.”

Working with Native Americans to help protect and restore their lands, NWF’s Tribal Partnerships Program is also helping restore bison to reservations. In 2016, the program helped bring 10 bison to the Shoshone Tribe—their first in 131 years—and that herd has grown to 33. During the past six years, NWF and tribal partners have restored more than 250 bison to tribal lands. “As more tribes put buffalo on their land, they’re going to create a trade network,” says Garrit Voggesser, director of tribal partnerships at NWF’s Rocky Mountain Regional Center. Reservations with established herds can give bison to other tribes to start or bolster their own herds. The cycle then continues, with NWF facilitating the transfers.

To strengthen this buffalo trade network, summit attendees discussed establishing ecotours to bring in revenue, what lands to designate for herds in the winter and spring, and education efforts such as Fort Peck Reservation's creation of a buffalo curriculum for schools.

A second summit will occur in November 2020. “This is not just a wildlife restoration effort,” says Baldes. “Because of the historical and cultural context this animal has in our communities, it’s the return of our relative.”