Growing food organically—at home or in community gardens—can benefit wildlife, the environment and neighborhoods in need of healthful food and connection to nature. 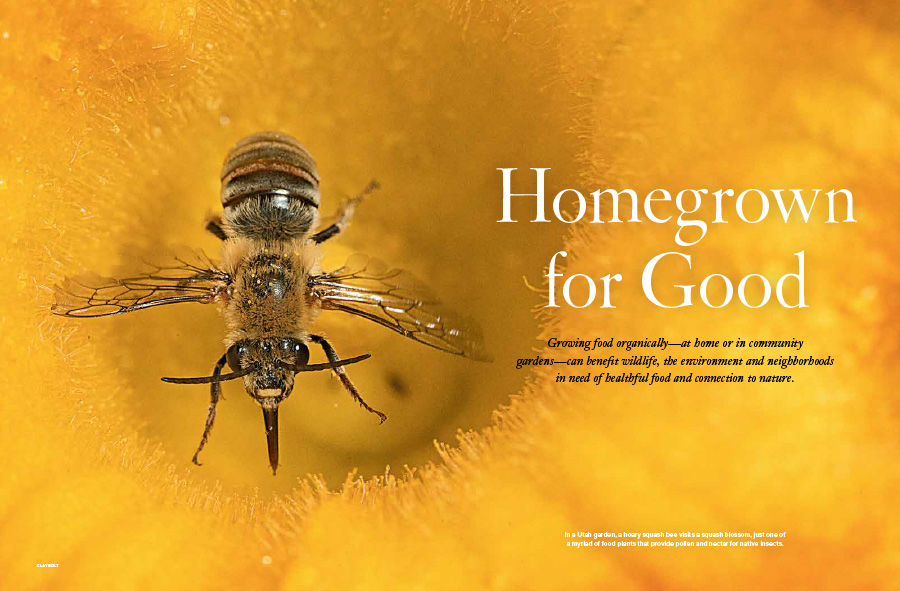 In a Utah garden, a hoary squash bee visits a squash blossom, just one of a myriad of food plants that provide pollen and nectar for native insects. (Photo by Clay Bolt)

ON A RECENT MORNING in Cannon Falls, Minnesota, Karin Jokela and her daughter, two-year-old Ani, are exploring the wildlife flitting and buzzing about their backyard produce garden. Ani inspects a bumble bee on a coneflower, one of many native flowering plants growing among Jokela’s vegetables, herbs and berries. “Is this the mama bee?” Ani asks, leaning closer—clearly intrigued by the busy visitor.

Jokela, a conservation biologist with the Xerces Society for Invertebrate Conservation, nurtures her daughter’s appreciation for the wildlife drawn to their food garden. Among the most exciting visitors have been the endangered rusty patched bumble bee. More-common native insects include pollinating sweat and squash bees, pest-eating wasps and ambush bugs and soil-building tiger and ground beetles. This abundance of insects, in turn, draws swallows, bluebirds, chickadees and other songbirds as well as tree frogs and toads. The garden also is home to slug-eating garter and fox snakes and even the occasional salamander.

Like Jokela, more than 64 million Americans keep wildlife in mind when they garden, according to the National Wildlife Federation-sponsored 2020 National Gardening Survey. At the same time, around one in three households—more than 109 million people—grow at least some of their own food in home or community gardens. And that was before pandemic gardening spawned record-breaking sales for seed companies and plant nurseries. According to the chairman of the Burpee seed company, the firm sold more seeds during 2020 than any time in its 144-year history.

“These twin trends—mounting interest in growing your own food and cultivating wildlife-friendly native plants—spell good news for the environment, biodiversity and people,” says Mary Phillips, the Federation’s head of Garden for Wildlife™.

Tomatoes, lettuces, peaches and other fresh foods flourish in an organic garden (above) in Palo Alto, California. In Sebastopol, California, squash (below) supplies both vegetables and edible flowers.

“Home produce gardens are an excellent opportunity to increase biodiversity,” says conservation ecologist Henrik Smith of Sweden’s Lund University. “Their conservation value may be particularly important in cities where the surrounding landscapes have been intensely developed.”

He notes that the blossoms of many fruit and vegetable plants provide both nectar and pollen for native bees and flies. Squash bees, for example, feed almost exclusively on zucchini and other squashes. Tomatoes, peppers, blueberries, cranberries and fruit trees are favorites of native mason bees and bumble bees. Fruit trees and berry bushes provide vital food for birds and omnivorous mammals such as raccoons and opossums. Peas, beans, herbs and leafy greens, meanwhile, offer egg-laying sites for many species of butterflies—from plain “cabbage whites” to dramatic long-tailed skippers and black swallowtails. These insects’ caterpillars nurture songbirds, especially nestlings, as well as predatory insects such as wasps, lacewings, ladybugs, fireflies and mantids. 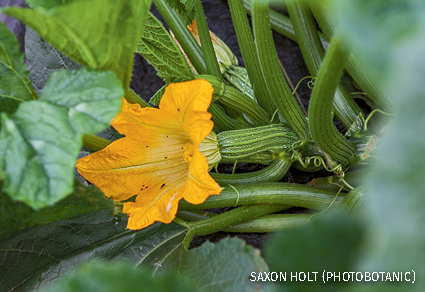 To increase a home food garden’s wildlife benefits, “create a mosaic of habitats,” recommends Smith. “In general, the more untidy the gardens, the better they are for biodiversity.” Such “untidiness” includes tolerance for some wildlife-friendly weediness to provide shelter and additional food for insects, birds and other small animals. Interplanting or surrounding produce gardens with native flowers—a variety of species for continuous blooming—along with clump-forming grasses will also support more wildlife.

“Beetle banks” consist of mounded soil planted with native bunch grasses that offer winter shelter for predatory ground beetles and their eggs and larvae. During the growing season, the larval and adult beetles move into the garden to eat insect pests and the seeds of weeds such as ragweed, pigweed, jimsonweed and foxtail. Beetle banks also provide habitat for killdeer, bobolinks, hermit thrushes and other ground-nesting birds as well as snakes, lizards, toads and small mammals such as opossums.

Avoiding chemical pesticides may seem an obvious benefit to biodiversity, and abundant scientific data statistically support that maxim. In one review of 98 peer-reviewed studies, published last year in Organic Agriculture, German researchers reported that the number of plant species was, on average, 95 percent higher on organic versus conventional farms. Birds and insects, respectively, were 35 percent and 22 percent more diverse.

In Oregon, blueberries (above) are ripe and ready for picking—if the gardener acts fast. Crows (below) and other wildlife readily gobble up these nutritious fruits. “Between the crows, orioles, robins, blue jays, turkeys, woodchucks, chipmunks, deer and foxes, it should come as no surprise that there’s only a handful of blueberries left for humans to bake a pie,” says photographer Melissa Rowell.

Beyond boosting biodiversity, food gardens provide broader environmental benefits. When the gardens replace bare ground and “hardscapes” such as driveways, for example, they can reduce soil erosion, says University of California–Santa Barbara ecologist David Cleveland. In a 2016 study, researchers at St. Paul, Minnesota’s, University of St. Thomas reported that converting vacant lots to gardens has the potential to cut stormwater runoff in that region by about 85 percent. 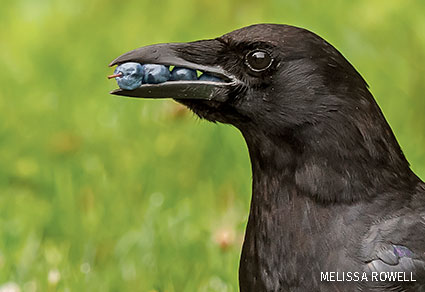 Building soil with compost and mulch further increases its water-holding capacity, Cleveland says. While composting can be difficult in small yards, a growing number of municipalities are adding food and yard waste to their recycling streams and making the resulting compost available to area gardeners.

“Turning a lawn into a vegetable garden can even reduce greenhouse gas emissions,” Cleveland adds. In a 2016 study published in Landscape and Urban Planning, he and his students created a model incorporating known benefits of converting a lawn to a garden—including replacing conventionally produced and transported store-bought fruits and vegetables with organic homegrown produce and diverting food and yard waste away from landfills (where its decomposition generates greenhouse gases). They found that each pound of vegetables harvested from a garden could cut greenhouse gas emissions by an average of 2 pounds compared to maintaining a lawn and buying produce in a store.

A student harvests strawberries in a California schoolyard garden.

Fresh food where it’s needed most

According to Phillips, “the benefits of food gardens are especially crucial in communities that lack access to fresh, affordable food along with the uplifting effect of contact with nature.” Most such communities are located in cities. In a 2010 review of 31 studies, public health researchers from Harvard University and the University of Pittsburgh reported that the majority of this country’s so-called “food deserts” occur in low-income neighborhoods and communities of color.

These unmet food needs are likely to intensify. The United Nations predicts that, by 2050, more than two-thirds of the global population will live in cities. Fortunately, urban farms and gardens have the potential to play a key role feeding our burgeoning cities, concludes a 2018 study published in the journal Earth’s Future. The paper’s authors generated a computer model estimating that such agriculture could produce 100 to 180 million tons of food annually, or up to a tenth of the world’s current production of beans and produce.

Growing food meets another critical necessity: the universal human need, both physical and psychological, for outdoor time and connection with nature. Chelsea Heffner, a home gardener in the small city of White Salmon, Washington, explains that although the products of food gardens “tend to steal the spotlight when most people think of the benefits, I get the most satisfaction in the process … the work and exposure to the elements … measuring time by what happens in the garden.”

Indeed, multiple scientific studies demonstrate that a regular dose of outdoor gardening can boost both mental and physical health. In one study, even as few as 30 minutes of gardening led to significant decreases in levels of cortisol, the so-called “stress hormone,” along with increases in self-reported mood.

Community gardens can provide benefits such as these in the places they are needed most. To boost those benefits in one midwestern city, NWF’s Detroit environmental education staff in 2019 brought together 29 neighbors to create community gardens at four houses of worship through the Federation’s Sacred Grounds™ program. With the need to socially distance during pandemic times, the program last year pivoted to helping families start their own home gardens by supplying them with starter plants—including broccoli, kale, cabbage and lettuce—as well as coaching by NWF Education Coordinator Antonio Cosme. “For many of these families, it was their first time growing food,” he says.

Native black-eyed Susans bloom among tomatoes, kale and chard (above) in a Minnesota garden. Interplanting and surrounding food gardens with native flowering plants creates habitat for wildlife, from beneficial insects to songbirds, reptiles and small mammals. A chipmunk (below) samples a strawberry.

Power of connecting to nature

Cosme also runs the Federation’s Detroit Leadership and Environmental Education Program, which provides students with outdoor experience and ecological education on his own organic farm in Southwest Detroit as well as in smaller garden plots and orchards tucked between neighborhood buildings across the city. “While we had to shift gears rapidly due to COVID-19, we reaffirmed our belief in the power of connecting people to nature,” he says. In addition, “the pandemic has helped awaken many residents to the level of food insecurity that accompanies our industrial agricultural system. They want to be prepared to provide some of their own food and improve their diets with fresh greens.” 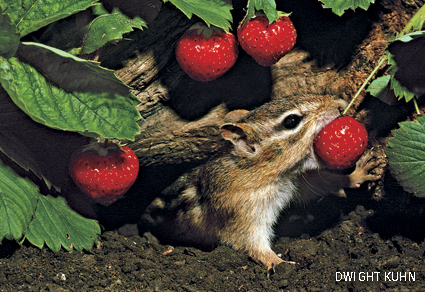 Cosme counts neighborhood children and teenagers among his most enthusiastic gardeners. He’s not alone. In New York City, the nonprofit organization Harlem Grown runs 12 community gardens with the mission of instilling a love of the outdoors and growing food in neighborhood kids—while producing 5,000 to 6,000 pounds of produce and composting some 20,000 pounds of food waste each year. “The first time they visit one of our farms, a lot of kids are afraid of touching anything,” says Outreach and Communications Coordinator Gabriella Rodriguez. “But within 30 minutes, they go from being afraid of bugs to holding one and being super excited.”

Some thousand miles to the west, Jokela and her daughter have just swept a small insect net through their vegetable garden in Minnesota. Peering inside, they find ambush bugs, ants, daddy longlegs and planthoppers. Jokela shows Ani how to tickle the hopper so it jumps. “It’s easy to simply focus on the beautiful flowers and vegetables,” Jokela says of their daily visits to the garden. “I also want Ani to grow up appreciating the wildlife that isn’t obvious but plays such an important role in sustaining our environment.”

Jessica Snyder Sachs is a New Jersey-based writer and editor.

Green Beats »
Three Tips to Create Your Own Homegrown Habitat »
Edible Gardens: A Win-Win for Pollinators and People » 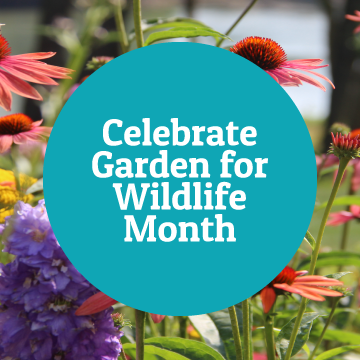