Return of the Swans 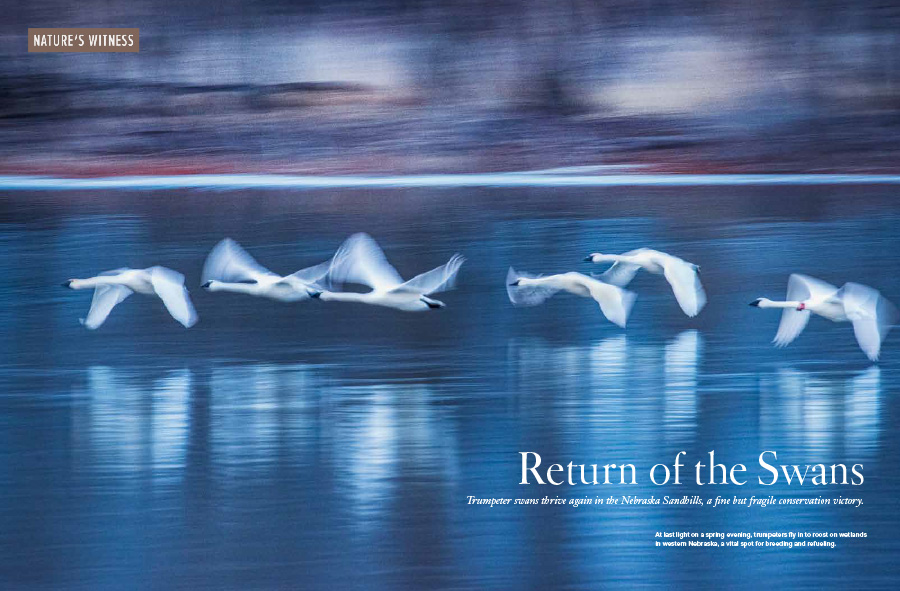 At last light on a spring evening, trumpeters fly in to roost on wetlands in western Nebraska, a vital spot for breeding and refueling.

THE FIRST TIME I SAW A TRUMPETER SWAN up close in the wild, I was so cold I couldn’t feel my face. It was early January in 1994, and I was lying in a blind on a friend’s ranch in the Nebraska Sandhills, staring at a wedge of rare open water in the vast, icy landscape. Trumpeter swans and other waterfowl clustered there to feed on aquatic plants and small fish. Only when I saw other birds near the swans did I appreciate their vast size—and oh, that heavenly white.

The world’s largest waterfowl, trumpeters once ranged widely from northern Canada to the Texas Gulf Coast, but by the early 1900s, hunting and habitat loss had pushed them near extinction. New conservation laws and reintroduction efforts stemmed the decline, and by the late 20th century, trumpeters were reclaiming much of their range, including the vital wintering and breeding grounds of the Nebraska Sandhills.

From 2014 to 2018, researchers with the Nebraska Game and Parks Commission placed transmitters on 49 swans to study their seasonal movements within the Sandhills, learning that swans return to the same wintering and breeding grounds year after year. This knowledge will aid conservation of key areas, now under assault from invasive species and weakening wetlands protections. More than 1,000 trumpeters grace Nebraska today. With care, these beautiful birds will forever return home. 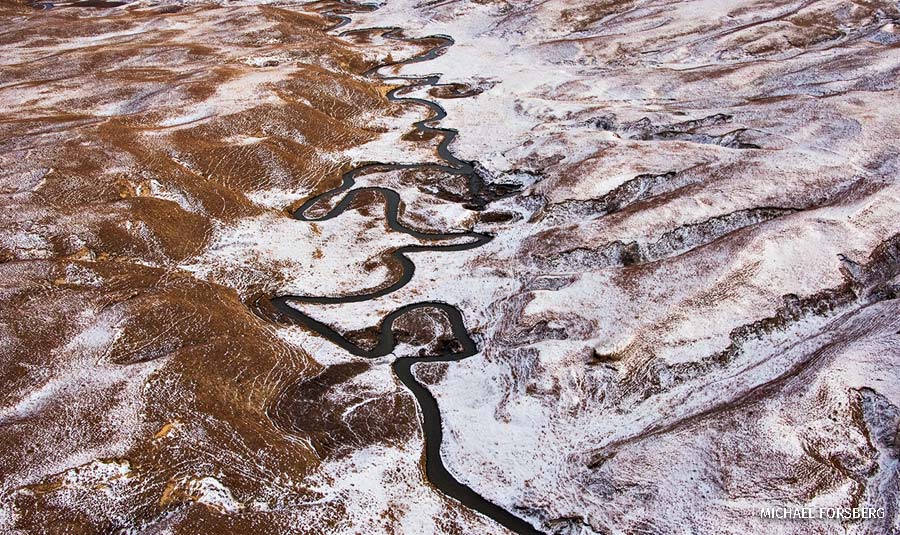 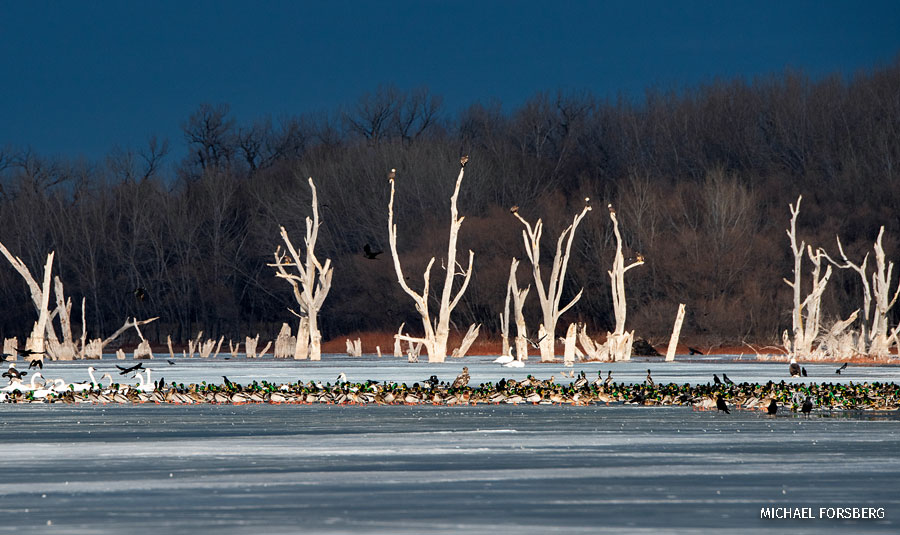 Along a patch of ice-free water in the Calamus Reservoir (above), scores of trumpeter swans, bald eagles, mallards, crows and other birds feast on small fish clustered at the surface. 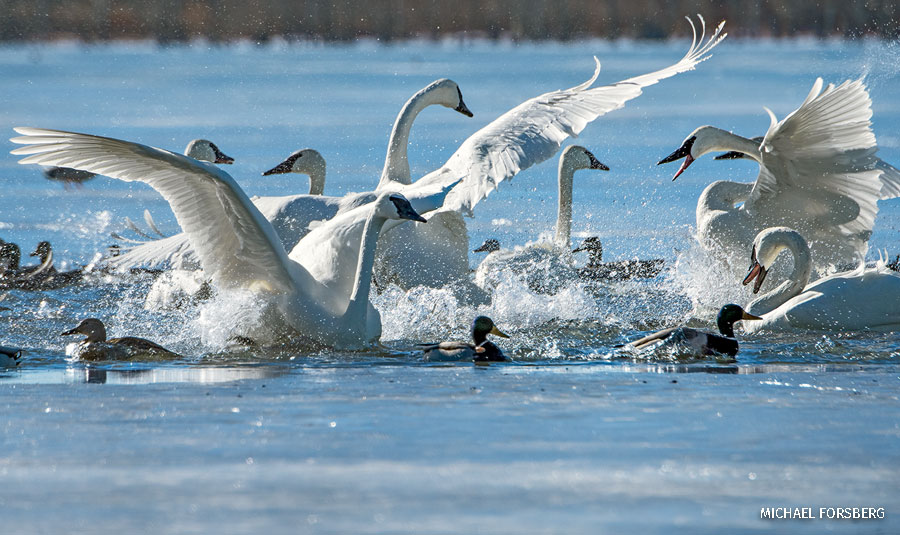 Trumpeters are not territorial in winter, but skirmishes (above) often erupt at foraging sites when resources and space are limited. 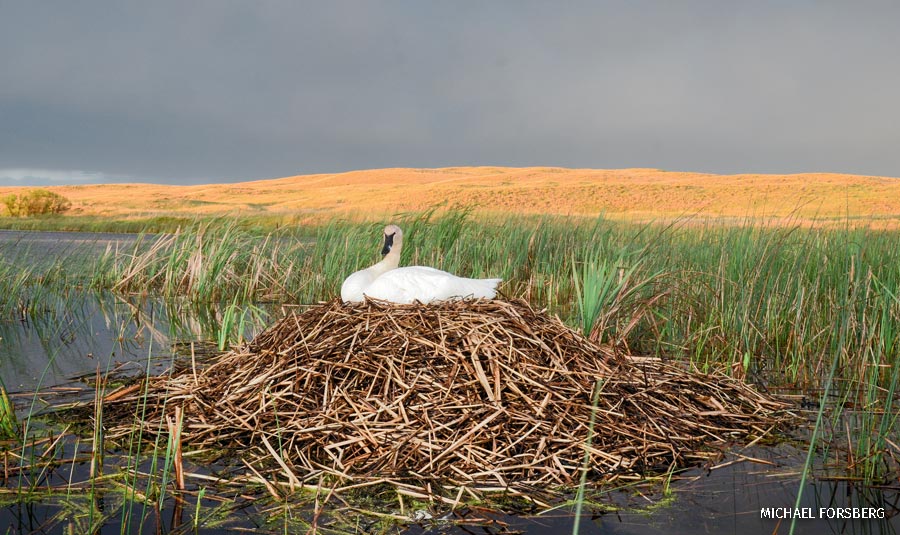 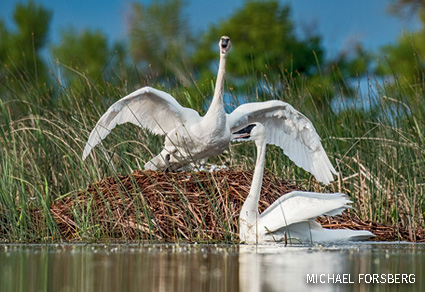 A vast expanse of mixed-grass prairie ranchlands and aquifer-fed wetlands make up the 19,000-square-mile Nebraska Sandhills, the southern end of the trumpeter swan's breeding range in the prairie states. From 2016 to 2018, Heather Johnson of the University of Nebraska–Kearney studied the swans' breeding success, and I helped document breeding behavior with still and time-lapse photography. We followed one pair of swans whose nest was flooded out, a loss the birds clearly mourned. Another pair built a nest on top of a muskrat hut (top) and successfully hatched two cygnets, which they fiercely defended with quivers and calls when another swan flew too close (bottom). 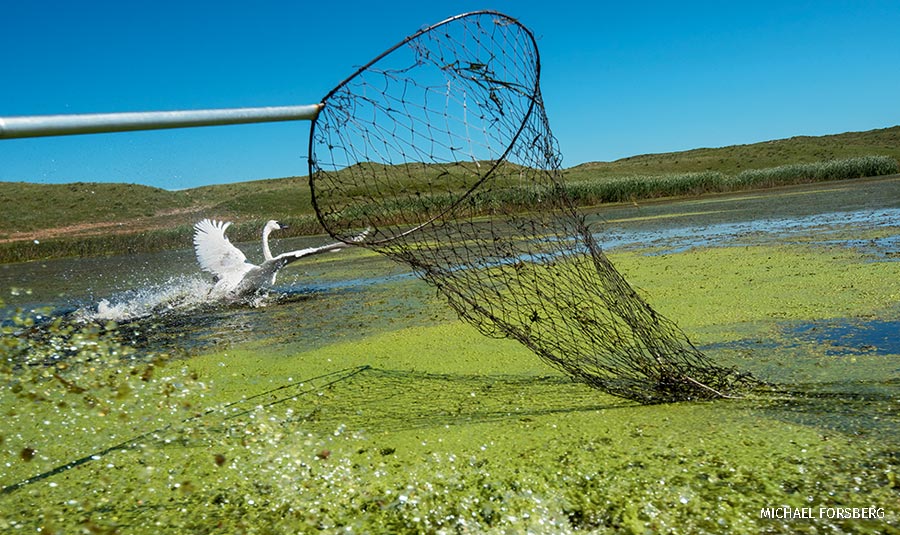 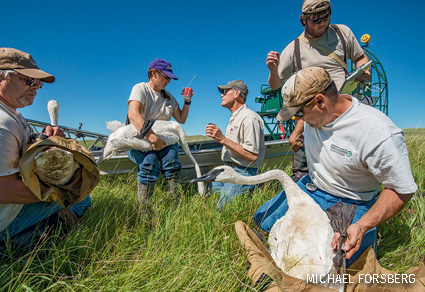 To capture and tag trumpeters in summer, researchers with the Nebraska Game and Parks Commission need fast airboats, big nets (top) and strength to cradle and band these hefty birds (bottom), which can top 30 pounds. It's a labor of love to protect the magnificent birds that, once seen, can never be forgotten.

Swan Song: 5 fun facts about these majestic creatures »
No Swan Song for the Trumpeter »
Our Work: Wildlife Success Stories »