With changeable coats and courageous tactics, weasels are miniature masters of the carnivore game—but humans may be stacking the deck against them 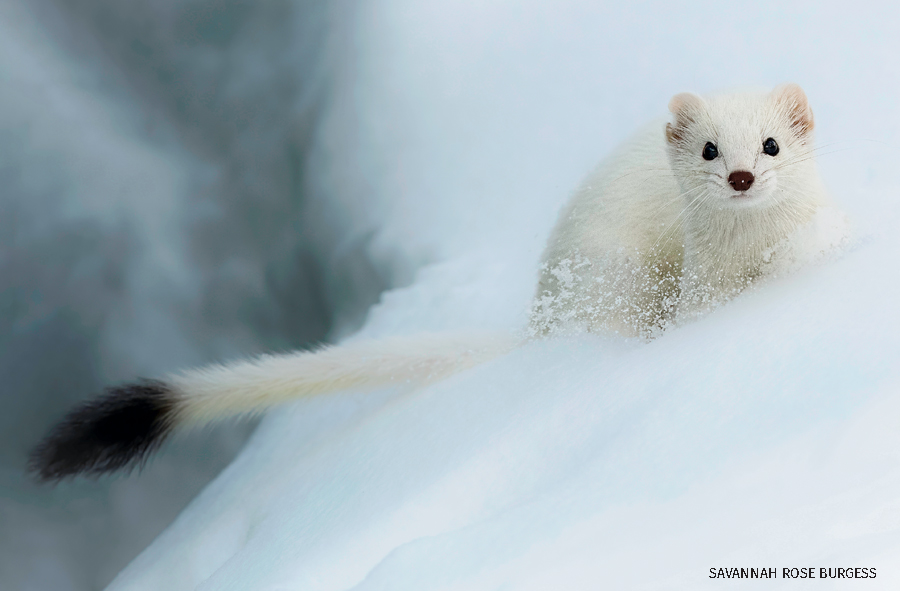 Wearing winter white (above) or summer brown and buff (below), weasels such as these long-tails in Wyoming are almost always hungry—and on the hunt.

WEASELS TAKE ON WINTER without a flinch. While many other creatures bulk up with insulating fat layers and denser fur, hunkering down in cozy dens to wait out the worst of the cold, weasels stay sleek and on the move. When days grow short in fall, these tiny hunters molt, most trading summer’s brown markings for a pure white coat—historically treasured in the fur trade as ermine. That silky white fur, barely thicker than their warm-weather pelts, makes them hard for predators to see against snow. 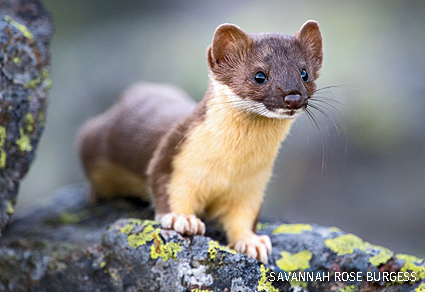 Long-tailed and short-tailed weasels—the two larger of the three Western Hemisphere species—retain highly visible black tips on their tails, which scientists speculate serve to attract the attention of owls, hawks, martens, fishers, foxes, badgers, cats and other hungry predators, leading them to lunge at the fluffy tail tip and miss the larger ermine-wrapped snack. Least weasels, the smallest of the trio, lack the black tail tip, but their tails are likely too short to serve as effective distractions anyway.

The weasel’s winter-white camouflage may also backfire as the climate continues to shift. When snow cover arrives late—or not at all—those white coats become bright beacons against dark tree trunks and the drab remnants of summer growth, increasing the wearer’s peril rather than reducing it.

With a sleek, muscled body and bounding gait, a short-tailed weasel, or stoat (above), can cover more than a mile in a few hours. Weasels are among the few solo hunters that routinely take quarry larger than themselves—such as the rabbit seized by a least weasel (below).

Though males grow larger than females, and there’s tremendous individual variation within the 16 species worldwide, weasels are among the world’s smallest carnivores. In studying the three weasel species that occur in the state, Montana Fish, Wildlife and Parks found that long-tailed weasels weighed from 3 to 12 ounces; short-tailed weasels, also known as stoats, topped out at 6 ounces, and least weasels weighed no more than 3. All share slender, nearly tubular bodies ranging from less than 10 inches long—including tails for least weasels—up to around 16 inches long for long-tails (though a third to half that length can be those tails). Oregon-based U.S. Forest Service biologist Mark Linnell recalls holding a female short-tailed weasel in the palm of his hand: “She was 35 grams—that’s about the weight of seven nickels. You really notice their vulnerability.”

Tiny doesn’t equal timid, and hunger is a powerful motivator. Most of the weasel’s preferred prey—including voles, mice, shrews, lemmings, moles and chipmunks—pass the winter eating and sleeping beneath the snow. “A thick covering of snow protects [these] small rodents from most predators, but not from weasels,” says veteran carnivore researcher Roger Powell, professor emeritus at North Carolina State University. All three weasel species are at home in the dim world under the snowpack, using keen senses of smell and hearing to follow the trails of prospective meals. And with their lithe build, they can easily slip into burrows and dens where they grab their quarry and deliver a killing bite to the spine or the base of the skull. “They are supreme experts at tunnel hunting,” Powell says. 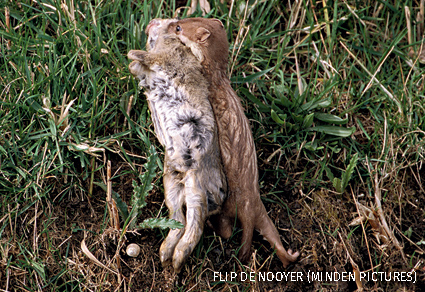 Many of the rodents that Powell calls weasels’ “bread and butter” are subject to boom-and-bust population fluctuations, so these stealthy hunters have evolved to exploit all available food-gathering tactics. They’ve been observed crossing fast-moving streams and even swimming nearly a mile to reach small islands adjacent to their mainland territories. In the Pacific Northwest, Linnell and his colleagues have found weasel scat 115 feet up in Douglas firs, where red tree voles build their nests. Such high-rise expeditions can yield rich rewards. “Once a weasel gets into a tree vole nest, it’s very much like the burrows they hunt in on the ground,” he says. “They can often score an adult as well as juveniles and carry extra prey back to the forest floor.”

With no room in their confined-space hunting zones for bulging bellies, weasels maintain their lean physiques by consuming only small meals at any one time; but their high-speed metabolisms require them to eat often—up to 10 times a day. Having extra carcasses stashed under rocks and among stumps and fallen branches means they can still grab a crucial mouthful even if a hunt proves disappointing.

When small prey are scarce, the constant need to feed leads weasels to take extraordinary risks, stalking and attacking rabbits, hares, rats, even birds that are many times their size. One kick from a 3-pound cottontail can easily kill a 3-ounce weasel. Animals that take prey larger than themselves—wolves, for instance—commonly boost their odds of success by hunting in groups. But solitary weasels are “bold and confident out of proportion to their size,” Powell says, “and they seem to play by a different set of rules.”

For all their toughness, weasels have many scientists worried. Powell says he’s been wondering for the past two decades why he’s been seeing fewer and fewer of the animals or even traces of their presence. Longtime small mammalian carnivore researcher David Jachowski of Clemson University found himself asking that same question in conversations with other wildlife specialists. So the biologist put together a team to examine four sources that promised insight into weasel population trends and the animals' current ranges: historic fur trapping records, museum collections, independently verified community-science observations reported on the iNaturalist platform and the results of a 2019 wildlife trail camera survey conducted at 1,509 sites across the United States.

Their analysis, published in PLOS ONE last summer, paints a chilling picture. Least weasel populations appear to be increasingly fragmented, and long-tails show a “dramatic drop-off” in numbers detected since 2000, especially around the Great Lakes and in the central and southern parts of their range, which once covered most of the United States. The International Union for Conservation of Nature “still classifies weasels globally as ‘species of least concern,’” Jachowski says, “but the population status of small carnivores is reviewed much less often than that of their larger kin, even though they face many of the same threats.” Those include habitat loss, disruptions to snowfall patterns driven by climate change and the legal and illegal use of rodenticides, which increase weasels’ risk of starvation by decimating their main food source or kill them outright when they ingest poisoned prey. Many U.S. wildlife managers recognize the risk: More than 20 states have already identified one or more of their native weasel species as needing conservation action now.

Jachowski especially hopes this new perspective will inspire more people to be aware of weasels in their midst and report sightings when they happen. There’s a growing consensus that “we really need to know more about what’s happening with weasels,” he says, “and that’s a conversation we weren’t having before.”

Lynne Warren wrote about how zoos and aquariums care for endangered wildlife in the June–July 2021 issue.