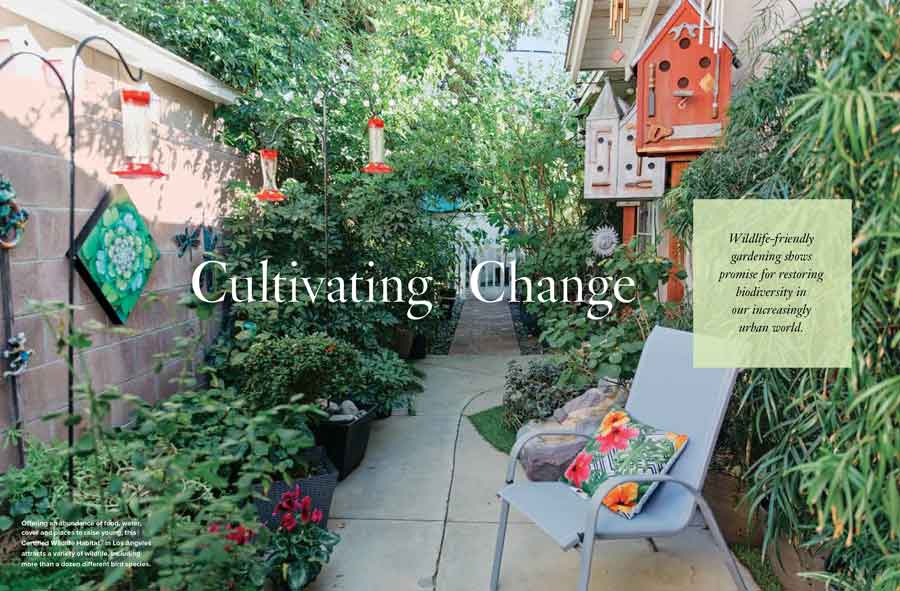 Offering an abundance of food, water, cover and places to raise young, this Certified Wildlife Habitat® in Los Angeles attracts a variety of wildlife, including more than a dozen different bird species. (Photographs by Grant Puckett)

MORE THAN A DOZEN HUMMINGBIRDS speed between the potted plants and hanging baskets that line the side of Paula Richards’ Los Angeles home. “Sometimes I think I’ll be impaled when I step out the door,” she jokes, clearly proud of the three hummingbird species—Allen’s, Anna’s and rufous—that visit her profusion of flowers. In the backyard, American and lesser goldfinches share a well-stocked feeder with chipping sparrows and house finches. And in the front, warblers and wrens flutter in a stone fountain while a northern mockingbird sings from the leafy branches of a palo verde tree.

What you do not see in Richards’ yard is lawn. She pulled it out to conserve water. But in a neighborhood where rock-and-gravel landscaping alternates with manicured turf grass, Richards wanted something more attractive to wildlife. To achieve that, she followed the National Wildlife Federation’s guidelines for creating a Certified Wildlife Habitat®, which required her to provide food, water, cover and places for wildlife to raise young. Today, more than a dozen bird species regularly visit Richards’ yard, most of them native. So do a variety of butterflies (including monarchs and swallowtails), bees, lizards, the occasional opossum, raccoon and skunk—and one morning, a great horned owl.

Recently, her yard—along with 23 other NWF certified habitats across the country—became part of an ambitious four-year study, American Residential Macrosystem: Yard Futures, funded by the National Science Foundation (NSF). Its goal is to identify yard-management strategies that increase biodiversity: the variety of life that gives ecosystems their resiliency. While still preliminary, the study’s initial findings suggest that wildlife gardening, if adopted on a wider scale, can help boost such diversity.

Mary Phillips, senior director of the Federation’s Garden for Wildlife™ program, is not surprised by the results. “For more than four decades, people have joined our program because their efforts pay off with an almost immediate attraction of birds, butterflies and other wildlife to their properties,” she says. “Now science is confirming that our program’s gardening practices support both an abundance and diversity of wildlife species.”

Greater diversity in urban landscapes is sorely needed. “From coast to coast, our cities and suburbs have become more similar to each other than to the very different natural habitats they’ve replaced,” says U.S. Forest Service ecologist Susannah Lerman, who co-leads the NSF study with Peter Groffman, an ecosystem scientist at City University of New York’s Advanced Science Research Center. “We have reason to be concerned that this growing uniformity of the American landscape is significantly reducing biodiversity.”

The consequences go beyond loss of beloved wildlife species. During the past decade, research has established a strong link between biodiversity and human health. Scientists have shown how reduced diversity promotes the emergence and spread of infections such as Lyme disease and West Nile virus, for example. The microbes that cause these serious illnesses multiply rapidly in disturbed habitats where their preferred hosts (such as black-legged ticks and white-footed mice) face little to no competition.

Several years ago, Richards (left) pulled out her turf-grass lawn and replaced it with drought-tolerant ferns (right) and other plants that have helped her conserve water in this frequently dry region.

Can yards make a difference?

Historically, wildlife conservation focused on protecting large wilderness areas. Yet parklands make up a mere 3 to 4 percent of the continental United States, Lerman points out. By comparison, yards make up roughly 17 percent. “And when we zoom into cities, yards make up about 50 percent of our total green space,” she adds. “That’s a significant amount of land with potential to provide quality wildlife habitat.”

To increase that potential, the NSF project is exploring how different styles of gardening and yard maintenance affect biodiversity, both on a yard-by-yard basis and on a neighborhood level. During the past two years, the project’s investigators have looked at 157 sites in six major metropolitan areas: Los Angeles, Phoenix, Minneapolis, Miami, Baltimore and Boston. All sites included four examples each of two types of parks (fragmented patches and larger protected areas) and four types of residential yards: wildlife friendly (all NWF certified habitats), highly managed (fertilized and maintained by lawn-care companies), passively managed (no fertilizer or professional maintenance) and water conserving (xeriscaping in the West and rain gardens in the East).

In each park or yard, the researchers identified and counted species of plants, birds, bees and ground arthropods (insects, spiders, centipedes, mites and the like) and took soil samples. While still analyzing their results, the scientists presented their first findings—on bird diversity—at the 2019 annual meetings of the Ecological Society of America and the American Ornithological Society.

According to Lerman, the study’s relatively small sample size—just four of each yard type per city—prevented the researchers from identifying a statistically clear-cut “winner.” (The average number of bird species was slightly higher in wildlife-friendly versus manicured yards, she explains, but that difference lay within the realm of chance.) Sophisticated analysis of the data, however, revealed some important patterns.

American and lesser goldfinches feast at a feeder (left) in Richards’ backyard, where a variety of birdhouses (right) provide places for cavity-nesting birds to lay eggs and rear their chicks. Richards’ property (below) is part of a nationwide, six-city study examining how different yard-management strategies impact the diversity of species that can thrive in the nation’s urban areas. So far, wildlife gardening has shown the most promise.

First, the highly maintained lawns tended to host “generalist” birds such as house sparrows, house finches, crows and grackles. As their name suggests, these generalists are not particularly picky when it comes to their needs for food and nesting. That means they can survive, even thrive, in disturbed areas. By contrast, wildlife-habitat yards tended to host more “specialist” birds that have evolved specific needs for resources most likely to be found in their native habitats. Examples in the study included curve-billed thrashers in Phoenix and great crested flycatchers in Minneapolis, which feed on specific types of insects and have special nesting needs such as cacti or natural cavities in dead trees.

In addition, different bird species tended to show up in each wildlife-habitat yard. Statistically, this suggests that surveying a larger number of wildlife-friendly yards would turn up additional species, increasing the overall biodiversity “score” of wildlife gardening, Lerman says. 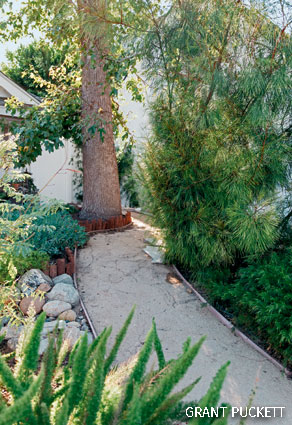 Highly maintained lawns, on the other hand, yielded similar collections of bird species across most of any given city—and to some extent across the country. Sampling more of these yards, therefore, would likely result in more of the same, with no increase in biodiversity.

That there wasn’t a more-dramatic difference in total bird species numbers, Lerman suggests, may reflect the reality that wildlife-friendly yards remain isolated patches of habitat in lawn-dominated neighborhoods. (On a national level, they represent fewer than 5 percent of residential properties.) It may be that these yards need to reach some critical mass to deliver on their greater promise. “Birds are highly mobile,” Lerman notes. “One yard with quality habitat isn’t enough. Some birds may need 20.”

Yet even isolated wildlife-friendly yards can provide connectivity to parklands, she adds. Across each of the six cities studied, parks—especially those with intact natural habitat—housed the highest number of bird species of “conservation concern.” These include species whose populations have declined and those facing significant threats such as the wood thrush and alder flycatcher.

In an effort to boost the number of wildlife-habitat yards across the country—and ultimately urban biodiversity—Lerman is working with sociologists to explore ways to increase their acceptance and popularity. One lesson: “If a yard looks messy, it may be fantastic for wildlife, but it’s not going to fly” with the public, she admits. “First, it needs to look nice.”

Wildlife gardener Paula Richards agrees. Whether working or relaxing in her tidy, eye-catching certified habitat, she says, “I like seeing people stop to look at my plants and birds. I get a lot of compliments. The kids come over, too. They’re fascinated.” In walks around her Los Angeles neighborhood, Richards is always on the lookout for additional wildlife-friendly yards. “Recently, I found one,” she says hopefully. “It would be wonderful to see more neighbors restoring this closeness to nature.”

A Farewell to Lawns: Native turf-grass alternatives »
Bloom or Bust: Grow a diversity of flowering plants »
NWF Blog: Three Tips to Create Your Own Homegrown Habitat »