A firefly expert shares her wisdom—and worries—about the insects 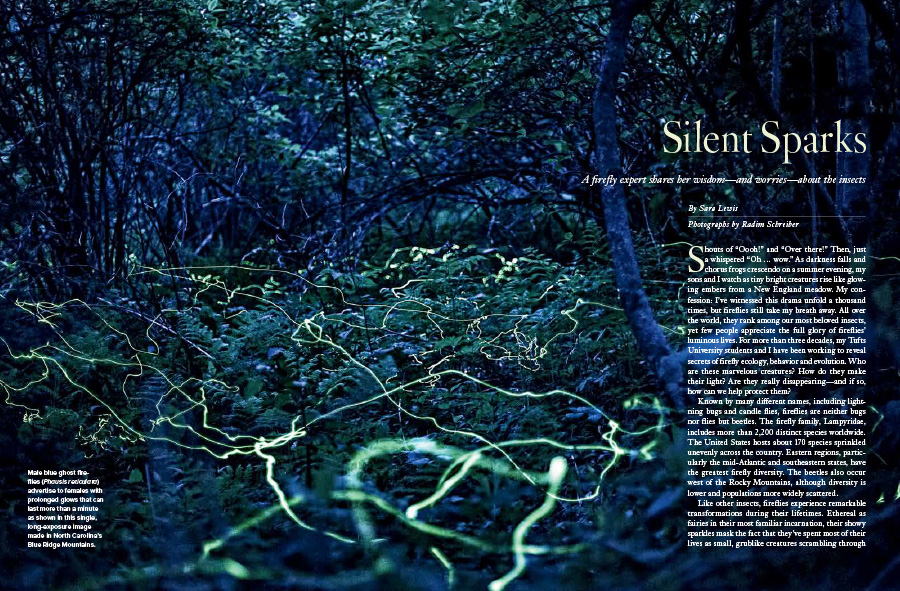 Male blue ghost fireflies (Phausis reticulata) advertise to females with prolonged glows that can last more than a minute as shown in this single, long-exposure image made in North Carolina’s Blue Ridge Mountains. (Photo by Radim Schreiber)

SHOUTS OF "OOOH!" AND "OVER THERE!" Then, just a whispered “Oh … wow.” As darkness falls and chorus frogs crescendo on a summer evening, my sons and I watch as tiny bright creatures rise like glowing embers from a New England meadow. My confession: I’ve witnessed this drama unfold a thousand times, but fireflies still take my breath away. All over the world, they rank among our most beloved insects, yet few people appreciate the full glory of fireflies’ luminous lives. For more than three decades, my Tufts University students and I have been working to reveal secrets of firefly ecology, behavior and evolution. Who are these marvelous creatures? How do they make their light? Are they really disappearing—and if so, how can we help protect them?

Known by many different names, including lightning bugs and candle flies, fireflies are neither bugs nor flies but beetles. The firefly family, Lampyridae, includes more than 2,200 distinct species worldwide. The United States hosts about 170 species sprinkled unevenly across the country. Eastern regions, particularly the mid-Atlantic and southeastern states, have the greatest firefly diversity. The beetles also occur west of the Rocky Mountains, although diversity is lower and populations more widely scattered.

Like other insects, fireflies experience remarkable transformations during their lifetimes. Ethereal as fairies in their most familiar incarnation, their showy sparkles mask the fact that they’ve spent most of their lives as small, grublike creatures scrambling through a dark subterranean world hunting earthworms, snails and other prey. Though young, these larvae already light up. On warm, wet nights in spring and fall, you might spot juvenile fireflies crawling along garden paths, glowing dimly as they forage. In colder climes, fireflies typically spend two years as larvae while farther south this stage might last just a few months.

As the days get warmer and longer, firefly larvae will pupate to emerge as adults in late spring or summer. Trading gluttony for romance, these newly minted adults have only a few more weeks to live, turning their attention to finding mates and propelling their genes into the next generation. The flashy displays that grace our summer skies mark just a brief, stunning finale to a life that’s been mostly hidden from view. 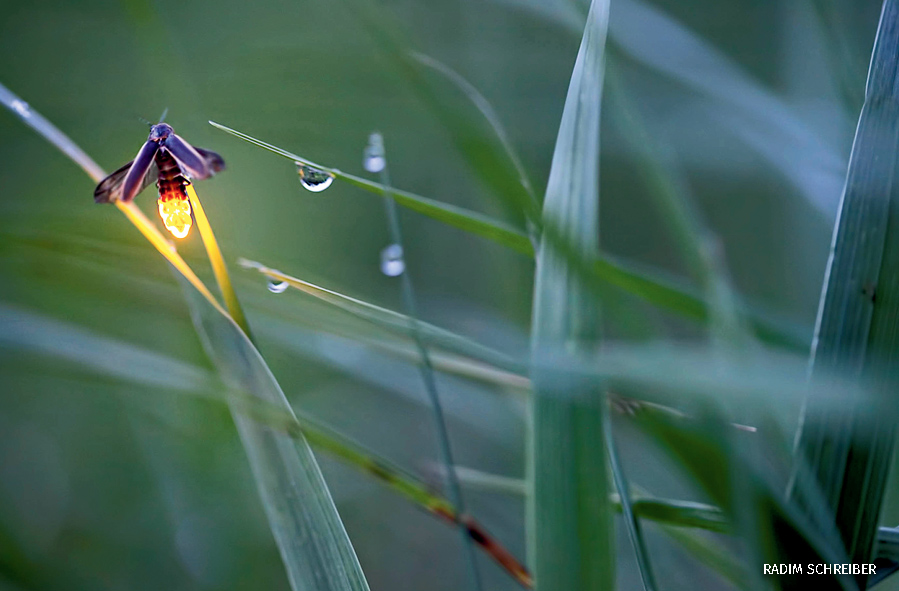 Why do fireflies flash? While creating light—or bioluminescence—is a common trait among sea creatures, it is rare in the terrestrial realm, with the noteworthy exceptions being fireflies and a few other insects along with some fungi, millipedes and earthworms.

Scientists who have traced Lampyridae back to a single common ancestor that lived more than 100 million years ago say it was this ancestor’s larvae that generated the family’s first sparks of bioluminescence. Today, every firefly juvenile retains that light-producing ability, even in species where the adults do not create light. (More than 30 such “daytime dark” fireflies inhabit the United States.) Researchers believe that bioluminescence first evolved to help larvae ward off predators. Bitter-tasting, these beetles are repellent—even toxic—to insect-eating birds and small mammals. But while other toxic or repellent insects such as monarch butterflies brightly advertise danger using reflected light in colors such as orange, red and black, firefly larvae that inhabit dark or dimly lit habitats have turned to light as a warning sign.

Once the ability arose, new uses for bioluminescence unfolded over evolutionary time—in particular, the flashes, flickers or glows that adults of most firefly species use during mating. In “flashing fireflies”—more than 110 U.S. species—both sexes employ quick, bright flashes to attract mates. As they fly, males advertise their availability with distinctive flash patterns while females rest on perches below. Perhaps most stunning are the synchronous displays created by a handful of species whose males coordinate their flashes to all shine together in unison. Each year, more than 30,000 people flock to sites in Tennessee, Pennsylvania and South Carolina to observe this spectacular natural phenomenon. 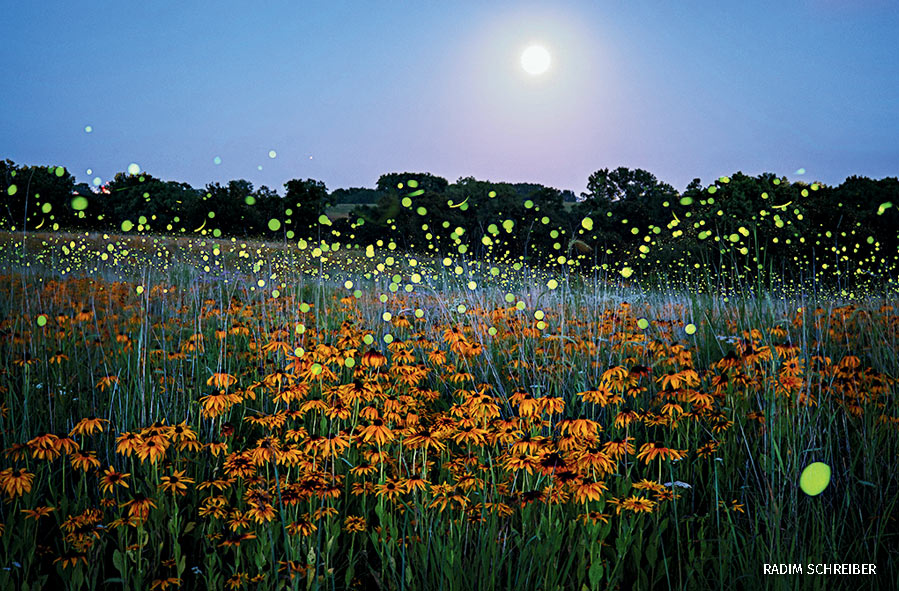 A full moon and wildflowers provide the backdrop for Photuris fireflies dancing over an Iowa meadow.

Lights out for fireflies?

Long-term data on fireflies are scarce, but anecdotal reports and expert opinion suggest that, in recent decades, many populations worldwide have begun fading out. To learn more about the status of North American species, I and other members of the International Union for Conservation of Nature (IUCN) Firefly Specialist Group partnered with the Xerces Society for Invertebrate Conservation and the New Mexico BioPark Society in 2020 to conduct science assessments for U.S. and Canadian fireflies. We gathered data for 132 species, then classified their extinction risks according to IUCN Red List criteria, the gold standard used by animal and plant conservationists worldwide.

Our analysis, published in November 2021 in the journal PLOS One, revealed that about one-third of U.S. fireflies are doing well. At least 18 species, however, face some risk of extinction. These imperiled species primarily inhabit small geographic areas in the Southeast, mid-Atlantic or Southwest. Of all, most at risk is the Bethany Beach firefly (Photuris bethaniensis), found only within a 20-mile sliver of Delaware’s southern coast. Despite extensive surveys, the distinctive bright green flashes of this species have been observed at only seven sites in recent years.

As with all at-risk fireflies, the greatest threat to the Bethany Beach species is loss and degradation of habitat—a problem especially for fireflies such as P. bethaniensis that are restricted to very specific habitat types. Bethany Beach larvae thrive only in the freshwater wetlands that may form in low spots between sand dunes. During the past 50 years, residential and commercial development along the coast have severely diminished this habitat. P. bethaniensis is now categorized as critically endangered on the IUCN Red List and as endangered in the state of Delaware, and it is the first firefly species proposed for federal protection under the Endangered Species Act.

Like all insects, fireflies also are threatened by pesticides used on lawns, gardens and agricultural fields, particularly the neonicotinoids that persist in soils where firefly larvae and their prey live. Aerial insecticides targeting adult mosquitoes can be harmful as well, especially when these products are sprayed at dusk when fireflies are most active.

Light pollution—from streetlights, security lights, landscape lighting and other sources—is known to harm many nocturnal creatures, but it poses a special threat to fireflies that rely on detecting one another’s luminous signals in the dark. In the United States, field and lab experiments with several species have found that artificial light can suppress males’ advertising flashes by more than 80 percent and prevent females from responding to these male signals, thus disrupting firefly courtship and reproduction.

The good news, however, is that the new IUCN review already has begun spurring action to help fireflies. Conservationists, including those at the Xerces Society, are working with state and local agencies to raise awareness, fill critical data gaps and protect and restore firefly habitat. “We’re laying the groundwork to protect our most vulnerable fireflies and to help the common ones stay healthy,” says Xerces senior conservation biologist and firefly program lead Candace Fallon. “It’s exciting to see how quickly people’s enthusiasm for firefly conservation is growing.”

How to help fireflies at home

Avoid pesticides. Broad-spectrum insecticides such as lawn chemicals can be especially harmful to firefly larvae and their prey. Practice organic gardening techniques that do not rely on chemical products. (Let fireflies help control your grubs, slugs and snails.) Avoid spraying for adult mosquitoes; control these pests more effectively and safely at the larval stage.

Bring back the night. Eliminate nonessential landscape lighting such as on trees and façades and use motion sensors and timers to shine essential lights—dimmed as much as possible—only when and where needed. If you live near firefly habitat, turn off or shield outdoor lights during the mating season.

Sara Lewis co-chairs the IUCN Firefly Specialist Group and is the author of Silent Sparks: The Wondrous World of Fireflies. Radim Schreiber is an Iowa-based nature photographer.