Flag a Fence, Save a Sage-Grouse 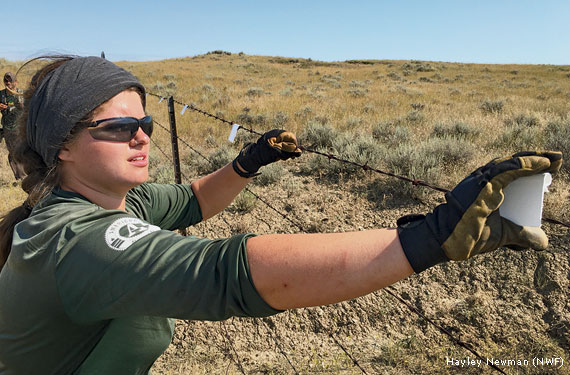 
THE SNAP, SNAP, SNAP of plastic tags being popped onto barbed-wire fence echoes across the vast expanse of eastern Montana’s sagebrush steppe as young volunteers—and potential future conservationists—sweat in the sun with a common purpose: to save greater sage-grouse.

In the summer, small groups of youth ranging in age from 15 to 25 join team leaders to spend up to four weeks camping on remote public or private lands and marking barbed-wire fences as part of a program coordinated by the National Wildlife Federation and the Montana Conservation Corps (MCC). “Not only is this work saving sage-grouse but it’s an incredible way to get kids outdoors doing hands-on conservation work,” says Hayley Newman, field project coordinator at NWF’s Northern Rockies, Prairies and Pacific Regional Center.  “It’s not the most glamorous work, but it’s so important.” 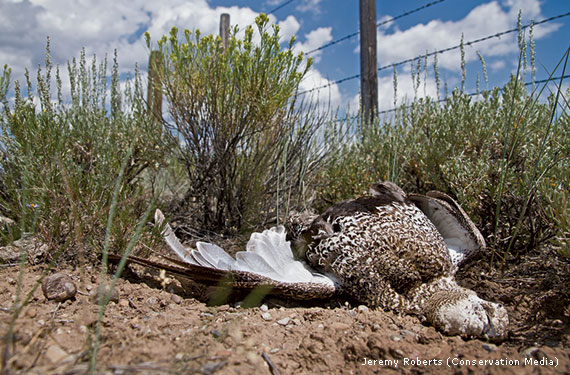 Filling a need, finding a purpose

Newman got involved when, three years ago, biologists from the nonprofit Sage Grouse Initiative (SGI) expressed the need for a large-scale, fence-marking effort in eastern Montana around prime sage-grouse habitat, particularly near leks, or mating grounds. When the low-flying birds are active at dawn or dusk, times of low visibility, they can fly into wire fencing and be injured and even decapitated.

Because fence marking is so labor intensive, Newman contacted MCC, which for years has led programs providing summer employment, outdoor leadership training and natural resource conservation trips for high school students and young adults. Not only does the program have a positive impact on participants’ “service ethic,” says MCC Director of Partnerships Lee Gault, but it serves as a “farm team for financially strapped state and federal agencies that need seasonal recruits.”

Perhaps the most significant benefit accrues to the birds. Research led by University of Idaho biologist Bryan Stevens shows that fence tagging can reduce sage-grouse collisions by 70 to 80 percent in high-strike zones. Using a modeling tool from SGI, Newman targets those high-risk areas near leks for the fence-marking program. “That’s where we focus our energies so we don’t waste time and resources,” she says. “There’s a lot of fence out West!”

To date, youth teams have marked 85 miles of fencing and hope to do another 90 miles this summer—one step at a time. The marking sites are often miles apart, so teams must drive long distances then work in the heat and solitude of the plains. “It’s a challenging atmosphere and the work can be tedious,” admits Newman, “but we try to have fun with it.” She says the kids’ reactions vary from “I want to quit” to “I want to be a wildlife biologist”—music to the ears of any conservationist.

“It has definitely changed some career paths,” says MCC’s Nate Hess, who led a fence-tagging field crew in 2015. “It’s hard work to go out there and save a species. But research shows that for every mile of fence flagged, that’s one bird saved. When we tell the kids that, they smile.”