Worth Their Weight in Gold

Belying a bad reputation, goldenrods do not trigger allergies—but do benefit pollinators 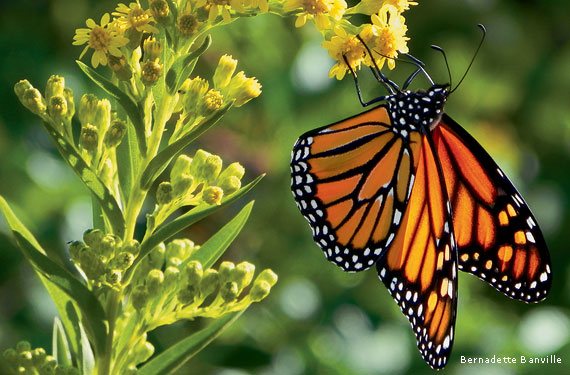 A monarch butterfly sips nectar from a goldenrod in Rhode Island. The plants are a critical food for the insects during their long fall migrations to overwintering sites.

WHEN MANY ALLERGY SUFFERERS hear the word “goldenrod,” they think, “Achoo!” But the truth is these plants are innocent victims of a long-standing myth.

Goldenrods bloom at the same time and in many of the same places as ragweeds. Both are members of the daisy family, but there’s a significant difference. Pollinated by wind, ragweeds’ dull green flowers release lightweight pollen that travels for miles in all directions. A single plant can propel as many as 1 billion irritating pollen grains—bad news for the 50 to 60 million Americans who suffer from seasonal hay fever.

By contrast, goldenrods’ bright yellow blossoms produce pollen too heavy to be carried by wind. “They rely entirely on animal pollinators,” says University of Delaware entomologist Doug Tallamy. More than 100 species of goldenrod native to North America bloom from late summer into fall, providing nectar and pollen for wildlife long after many plants have stopped flowering. “It’s one of the best herbaceous native perennials for attracting and feeding wildlife,” Tallamy says.

Plant of Bounty and “Brains”

Tallamy’s studies show that golden- rods provide food and shelter for 115 butterfly and moth species in the U.S. Mid-Atlantic alone. More than 11 native bee species feed specifically on the plants, and in fall, monarch butterflies depend on them for nectar to fuel their long migrations. Even in winter, songbirds find nourishment from goldenrod seed heads long after the blossoms have faded.

Recent research shows that some goldenrods also display defensive behavior never before documented in plants. While many plants have evolved thorns and chemical toxins to combat insect pests, a species called tall goldenrod employs a different tactic: “They duck,” observe botanists whose studies at Bucknell University reveal that some of the plants’ young stems nod during spring when flies that lay gall-inducing eggs are present. By nodding downward, emerging buds essentially hide and avoid damage by galls, growths that can diminish a plant’s ability to produce seeds. In tests described in the American Journal of Botany, Michael Wise and his colleagues found that flies did not lay eggs on a single “ducking” plant, opting instead to move on to other hosts.

In a subsequent study, Pennsylvania State University scientists found the plants can marshal these defenses after simply sensing the odor of a male fly emitting a mate-attracting pheromone. How does a goldenrod detect the fly’s odor? The answer to that question, like many others, is among the secrets these special plants have yet to reveal.