Roots of a Revolution

From its humble start in a handful of yards 45 years ago, the National Wildlife Federation’s Garden for Wildlife™ program has blossomed into a nationwide network of conservation heroes 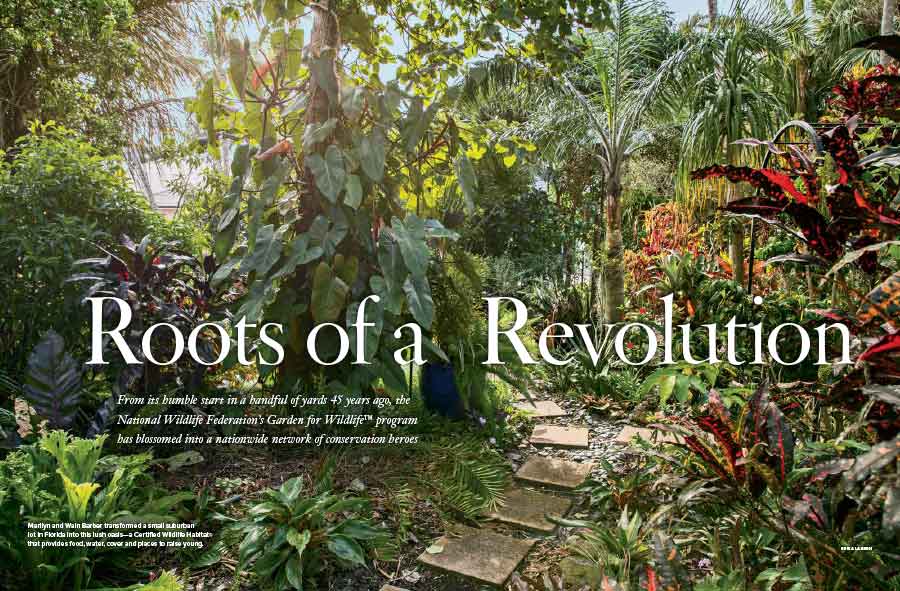 WHEN Marilyn and Wain Barber bought a house in Plantation, Florida, in 1997, the yard had a few spindly palms, some hibiscus blooms and a bit of nonnative jasmine. “That was it,” says Marilyn—but not for long. Avid nature lovers, the couple ripped out the exotic vegetation and put in a variety of native tropical plants, including geiger tree, wild coffee and torchwood, transforming their property into a lush Eden and National Wildlife Federation Certified Wildlife Habitat®. Neighbors took notice, and today the entire city of Plantation is certified. 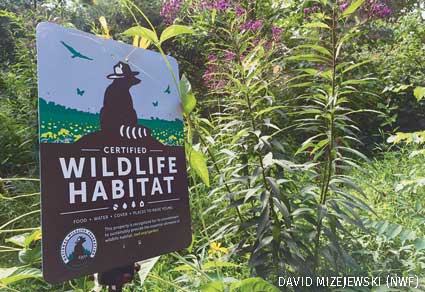 Less than a quarter acre, the Barbers’ yard is an oasis for wildlife—with wild visitors running the gamut from monarch and zebra longwing butterflies to songbirds, snakes, frogs and dragonflies. “But the most important visitors to our yard,” Marilyn says, “are children from the neighborhood.” Happy to welcome them, she explains how her blooms and berries nurture native wildlife. “If I find a dead dragonfly or desiccated lizard, I’ll tell the children to take it home and look it up,” says the former schoolteacher. Why take such time for children? “Because they are the people who are going to save this planet,” she says.

In cities, towns and suburbs across the country, a similar passion to save the world’s wildlife is blossoming among hundreds of thousands of participants in the Federation’s Garden for Wildlife™ program. Celebrating its 45th anniversary this year, the program is more important today than ever, says its director, Mary Phillips. With metropolitan areas already consuming nearly half the land in the lower 48 states, “we cannot ignore the role our populated areas must play in preserving biodiversity,” she says. “Gardening is one of the best ways that people can help wildlife.”

Experts estimate that roughly two-thirds of all North American wildlife species range in U.S. metro areas, including imperiled animals such as the Florida panther, gopher tortoise and western and rusty patched bumble bees. Wildlife gardeners play a particularly important role when they provide habitat for dwindling pollinators such as monarch butterflies and native bees, says Phillips. “It’s a way that ordinary people can make a real difference for biodiversity in their own backyards.”

That notion is supported by studies in several cities across the globe, including Berlin, London, Detroit and Chicago. In each, scientists have documented surprisingly plentiful and diverse populations of native bees thriving on private and public properties. In New York City, for example, entomologists identified 54 bee species—13 percent of the state’s bee fauna—over a four-year period in the city’s community gardens. What’s more, “research is showing that improving wild pollinator populations in urban areas improves species diversity and abundance in nearby agricultural lands,” reports an international team of scientists in the journal Conservation Biology. 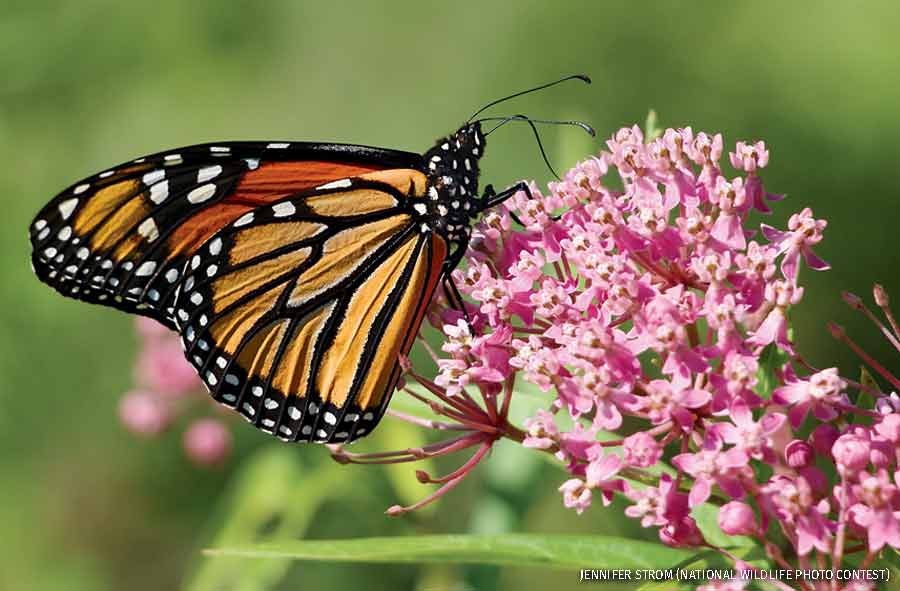 A monarch butterfly drinks nectar from swamp milkweed. To help monarchs and other migrating pollinators, children in North Carolina are planting school gardens (below) to serve as “pollinator pit stops.”

The Federation’s efforts to create a nationwide network of certified wildlife habitats date back to the early 1970s, when two U.S. Forest Service scientists, Richard DeGraaf and Jack Ward Thomas, released a study on how to convert residential properties into havens for native species. Their investigation found that the same basic principles wildlife managers had been using for years on a large scale—providing food, water, cover and places for animals to raise young—also worked on a small scale in backyards. In a 1973 article in National Wildlife® magazine, the scientists detailed steps people can take to attract and nurture wild creatures in their yards. “If we are to maintain any contact between urban and suburban residents and nature, we must share our living space,” they wrote. The article’s tips and lists of recommended plants became the basis for NWF’s certified habitat program, which launched that same year with 249 properties meeting the criteria for certification. 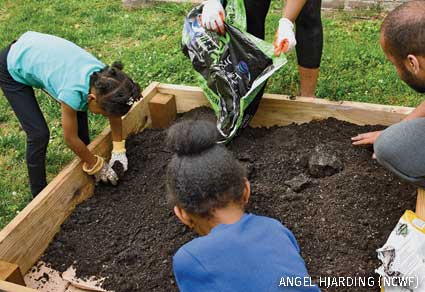 In the four and a half decades since, the program has evolved from a modest effort focusing on private yards to a nationwide network that also certifies wildlife habitat at elementary and secondary schools, college campuses, businesses, government facilities, zoos, places of worship, botanical gardens, baseball stadiums and even entire communities. To date, with help from its state affiliates and other partners, the Federation has certified more than 217,000 private and public sites across the country, an estimated 2.5 million acres. “These are programs that everyone can participate in and enjoy, no matter how small their properties are,” says Patrick Fitzgerald, NWF’s senior director of community wildlife. Beyond helping native species, he adds, “seeing wildlife visit and thrive in your yard gives you a wonderful feeling.”

Julie O’Donald knows that feeling well. Her family’s half-acre certified habitat, located in the town of Brier, Washington, includes goldenrod, aster and several other nectar and pollen sources that bloom successively from early spring through late fall. Six summers ago, O’Donald’s daughter Megan spotted an unfamiliar bee with a distinctive white rump feeding in a patch of milkweed. Working off a photo Megan took, experts at Stanford University identified the insect as a western bumble bee—marking the first recorded sighting of Bombus occidentalis in the Puget Sound area for more than a decade. Once the region’s most common bumble bee, it now is among the rarest, a victim of habitat loss, pesticides, disease and other threats. Rediscovering the species in her yard was both “exciting” and a “validation that our certified habitat could produce a positive result,” says O’Donald, who, since then, has seen the rare bee two more times.

Yet the researchers also noted room for improvement. Coauthor and UW wildlife ecology professor David Drake called the NWF habitats “a patchwork of certified properties. There’s no connectivity. Individual certified yards are often several blocks or more apart.” He and his colleagues said the program could do more to help wildlife—especially migratory species such as Neotropical warblers and monarch butterflies—if its certified habitats were located closer together or linked by corridors. 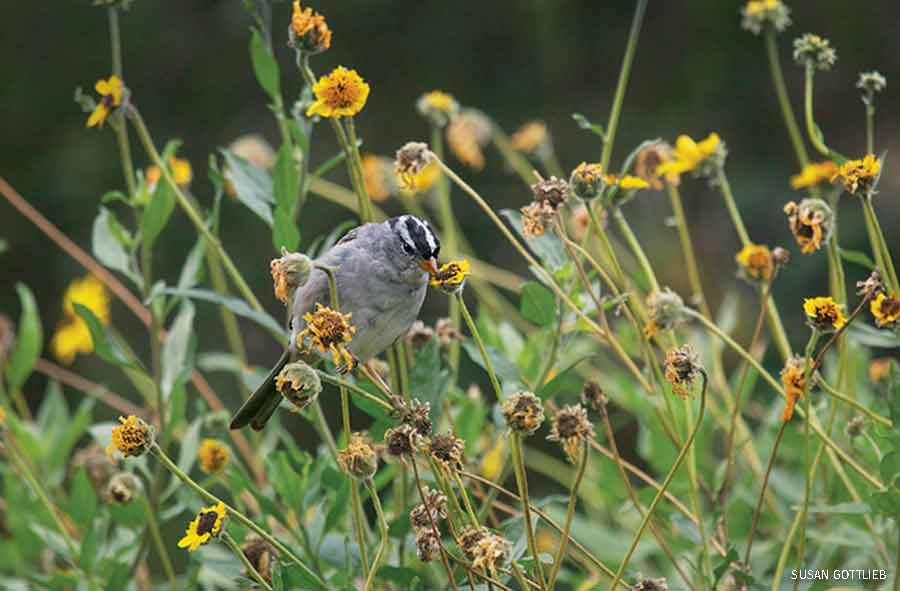 The Federation has taken that suggestion to heart. “We’re focusing much of our Garden for Wildlife work today on creating connections between certified properties and between those properties and larger protected areas,” Phillips says. By adding native trees, flowering plants, water sources and other resources to their landscapes, she explains, gardeners can create stepping-stones that connect otherwise separated habitats. “Such linked habitats,” she adds, “are essential to supporting healthy populations of migratory animals.” 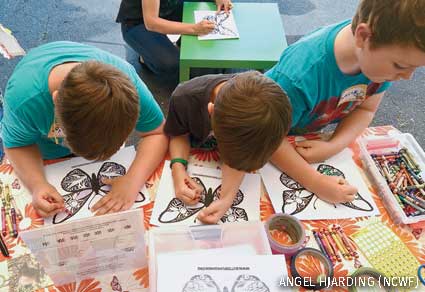 In North Carolina, for example, hundreds of residents are participating in a statewide campaign to build habitat corridors for pollinators, coordinated by NWF affiliate the North Carolina Wildlife Federation (NCWF). Called the Butterfly Highway, the program encourages volunteers to develop and monitor a network of “pollinator pit stops” in backyards and large roadside habitats filled with native plants such as black-eyed Susan, purple coneflower and bee balm. “Hopefully, participants will come away with a better understanding of biodiversity,” says project director Angel Hjarding.

The highway effort began two years ago in Charlotte, not long after the city became NWF’s largest city east of the Mississippi River certified as a Community Wildlife Habitat™. About 1,200 Charlotte property owners have met the Federation’s criteria for certification, including Wan and Edwin Marsh, whose backyard 5 miles from downtown was among the first certified properties in the city 30 years ago. Today, the couple’s Carolina dogwood, oakleaf hydrangea and other native species still attract a variety of butterflies and birds, including Carolina chickadees and barred owls. “Our goal is to show that we can have a large metropolitan area with strong economic growth and still provide plenty of places to support wildlife,” says Ernie McLaney, president of NCWF’s Charlotte chapter. 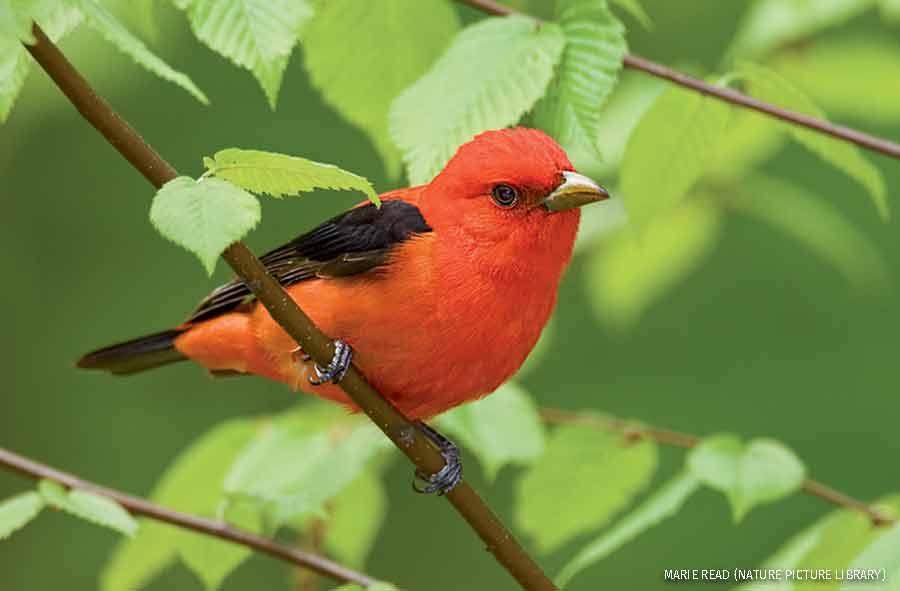 In Broward County, Florida, Lauderdale Lakes Middle School students (below) plant native trees as part of a project to create corridors of trees and other plants providing food and shelter for migratory birds such as the scarlet tanager. Participants have planted more than 20,000 trees so far.

That same goal is helping drive a wildlife corridor project in Broward County, Florida, home to some 1.8 million people. The Federation is working closely with a county government group, NatureScape Broward, to establish a patchwork of tree canopies that will provide food and cover for scarlet tanagers, ruby-throated hummingbirds and dozens more migratory species. With 70 percent of the county’s 310 schools and 20 communities certified or in the process of qualifying at the start of 2018, these connections for wildlife are growing fast.

To target tree planting where it helps migratory species the most, the team at NatureScape Broward uses GIS mapping technology to identify the area’s “habitat deserts.” “We discovered a hole in the center of the county with less than 20 percent tree canopy coverage,” says Broward Natural Resource Specialist Rose Béchard-Butman. “We want to establish tree canopies that cover 40 percent” of the county’s land area. 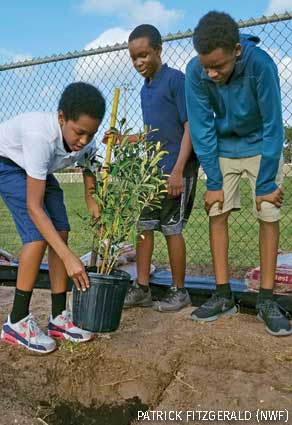 To help meet that goal, schoolchildren and other volunteers to date have planted more than 20,000 new trees—many donated by the Federation with support from the Community Foundation of Broward—a good number of them in low- income neighborhoods. “The new trees and gardens at many of these locations created habitat where previously there was none at all,” Fitzgerald says.

Sadly, when Hurricane Irma struck the region late last summer, the county’s canopy “took a big hit,” says Béchard-Butman. Officials estimate the storm knocked down at least 1,800 large trees in public parks, along with countless trees and other plants in thousands of private yards. Undaunted, Béchard-Butman and her colleagues are “redoubling our efforts to restore damaged areas to provide stopover sites for migratory birds,” she says.

These new green spaces are doing far more than helping migratory birds. They also have provided much-needed shade and new outdoor learning spaces on several school grounds. “With the gardens we put in, students can now study nature and learn about wildlife right outside their classrooms,” says Broward Education Specialist Victor Suarez. “This was the first time many of these kids had planted trees and worked in gardens,” he adds. “You could see the excitement in their eyes.” 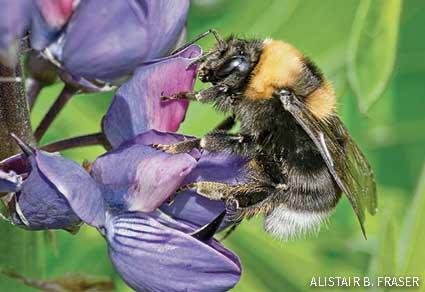 Once common, the western bumble bee has nearly disappeared from most of its range—and this important pollinator is hardly alone: Experts say more than a third of North American wildlife species are at risk of extinction. Responding to the crisis, the National Wildlife Federation’s state and territorial affiliates unanimously approved a four-year strategic plan at their 2017 annual meeting, the first step toward a long-term goal of increasing the continent’s wildlife populations within a generation. With more than 4 million participants, “our Garden for Wildlife™ program will help us achieve the plan’s pollinator and songbird recovery goals nationwide,” says Federation President and Chief Executive Officer Collin O’Mara. As if underscoring his point, one gardener in Brier, Washington, discovered a western bumble bee in her Certified Wildlife Habitat®—the first sighting of that species in the region for more than a decade.

Weedy to Wonderful »
Going Native »
Growing a Better Birdfeeder »
Being There for Bees »
Habitat Highways »
Why Communities Matter for Wildlife »
Get National Wildlife's Gardening Book: Tips for Seasons »