These aquatic mammals are helping restore parched ecosystems in the West 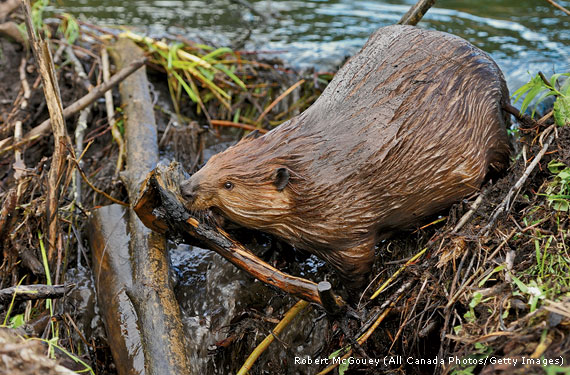 By creating dams, beavers such as this one in Alberta, Canada, form ponds that can expand an area’s water reserves while supporting a diversity of wildlife.

THE SUGAR CREEK RANCH FLY FISHING CLUB sits at the confluence of Sugar Creek and Scott River in northern California. The river’s cold water feeds the ranch’s eight ponds and lakes stocked full of fat trout and other fish that draw hordes of anglers. But the more important action is happening at the ranch’s unassuming beaver ponds. There, two beaver dams have helped save threatened coho salmon that were struggling to find enough water in the river just two years ago at the height of the state’s record drought. Today, the coho are thriving along with bear, fox, deer and hundreds of birds. “It is kind of a paradise,” says ranch manager Jerry Lewis.

The ranch’s beaver pond is one of many that the Scott River Watershed Council and its partners have encouraged property owners to create in the Scott River Valley to help restore water reserves while creating vital habitat for juvenile steelhead trout, coho and Chinook salmon. The trout and coho grow in the ponds’ still, cold water before swimming down to the ocean to fully mature and then return again several months later to spawn.

The ponds began with beaver dam analogues, or BDAs. Landowners can build these by pounding a series of vertical posts into a stream or river, interweaving branches through the posts then packing on vegetation and mud to create a dam that pools water. Enticed by the ponds, beavers often move in to build lodges and raise young and will increase the dam’s size and subsequent water retention.

To date, the Scott River Watershed Council has helped ranchers and farmers install eight BDAs in the watershed, and beavers have moved into six of their ponds. “Beavers have greatly enhanced the structures we’ve put in,” says Betsy Stapleton, the council’s board chair. “It has been a really cooperative relationship.”

This hasn’t always been the case. Beavers were once so abundant in Scott Valley that Hudson’s Bay Company trappers referred to it as Beaver Valley. But by the late 1880s, trappers and those who viewed the tree-toppling mammal as a nuisance greatly depleted the population here and across North America. Today, beaver occupy most of their historic range, but the population of about 6 to 12 million is far below historic levels.

The beaver’s efficiency contributed to its downfall. Master eco-engineers, the rodents feed on shrubs, leaves and the inner bark of soft trees, preferably aspen, cottonwood and willows. They also use leaves, sticks and mud to build their dams and lodges, which can be several feet wide and high. Families of four to eight individuals—usually a mother, father, juveniles and kits—work together to maintain the structures. All this activity can keep a beaver busy from dusk to dawn and change a landscape overnight—something people might view as good or bad.

“Farmers need to irrigate their land, but beavers can plug up a head gate where water comes off a stream in just 12 hours,” says Stapleton. “They can also dam up a creek near a home or field, which can flood them. And they chew down trees that people enjoy. When we started, we would barely mention the word ‘beaver’ in public. Then the drought hit. That really changed the conversation.”

California’s drought from 2011 to 2016 severely depleted water reserves across the state. When in 2014 segments of the Scott River dried up, the California Fish and Wildlife Department trucked thousands of juvenile coho to areas of the river that had adequate flows and habitat.

Since 2015, salmon and trout are thriving with the help of the new beaver ponds, which expand surface water, recharge groundwater reserves and improve water quality by filtering and trapping sediments and recycling nutrients. Their shaded, deep pools also provide cool refuge for fish and support a wide diversity of wildlife.

NOAA Fisheries biologist Michael Pollock is monitoring the region’s BDAs and found that they have raised water tables up to 3 feet as far as 1,500 feet from the dams. In addition, the BDAs have kept water flowing through fish-filled, downstream side channels all summer long, habitat that previously dried up during that time. Pollock says the positive impacts of the BDAs have reached far further than anticipated. “We didn’t expect that,” he says.

Federal and state agencies, including in California, are considering beavers as conservation partners to restore habitat and bolster its resilience to climate change. Not only do the dams build up water reserves but a series of dams can act as speed bumps to slow flooding, and they can even sequester carbon.

Several western states, including Washington, Oregon, Idaho and Colorado, are using BDAs or reintroducing beavers to help restore local ecosystems. For Montana’s Lolo National Forest, the National Wildlife Federation and its affiliate Montana Wildlife Federation are working with the Clark Fork Coalition to help the U.S. Forest Service craft a plan to build BDAs and restore beavers. This would help boost water reserves in riparian habitats at risk from reduced snowpack and increased droughts, which would restore habitat for threatened bull trout and other wildlife. “Beaver are low-cost workers, but they can provide huge benefits,” says Traci Sylte, the forest’s soil, water and fisheries program manager. 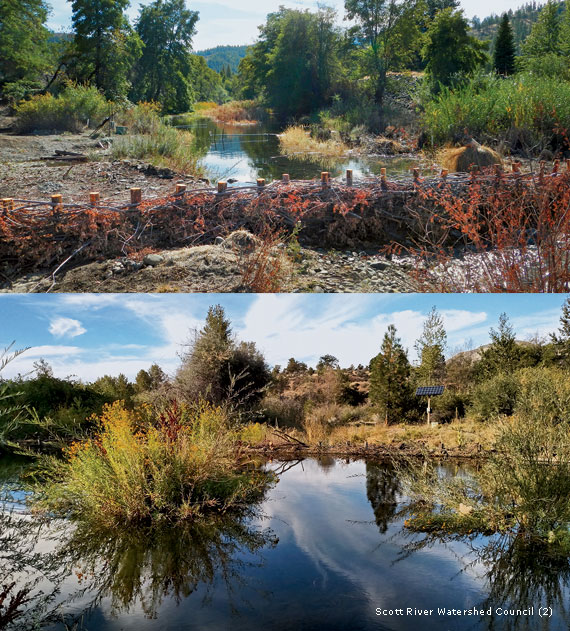 At Sugar Creek Fly Fishing Ranch in Northern California, a beaver dam analogue (top) attracted a beaver, which maintained and elevated the pond’s water levels (below)

This year, four more Scott River Valley BDAs are planned and several other landowners are waiting for permits, including Tom Menne, a second-generation alfalfa farmer and chair of the Scott Valley Groundwater Advisory Committee. “Water problems tend to be a can that gets kicked down the road,” he says. “I didn’t want my kids to have to deal with it.”

Additional ponds can’t come too soon. Pollock’s survey of Sugar Creek last fall found 6,400 juvenile coho and steelhead in BDA ponds, which currently can provide habitat for only up to 6,800. If just a few hundred fish come back to spawn, they might run out of room. “It is a good problem to have,” says Pollock.