After more than 100 years, management of the National Bison Range finally returns to the Indigenous peoples who had cared for the land for centuries. 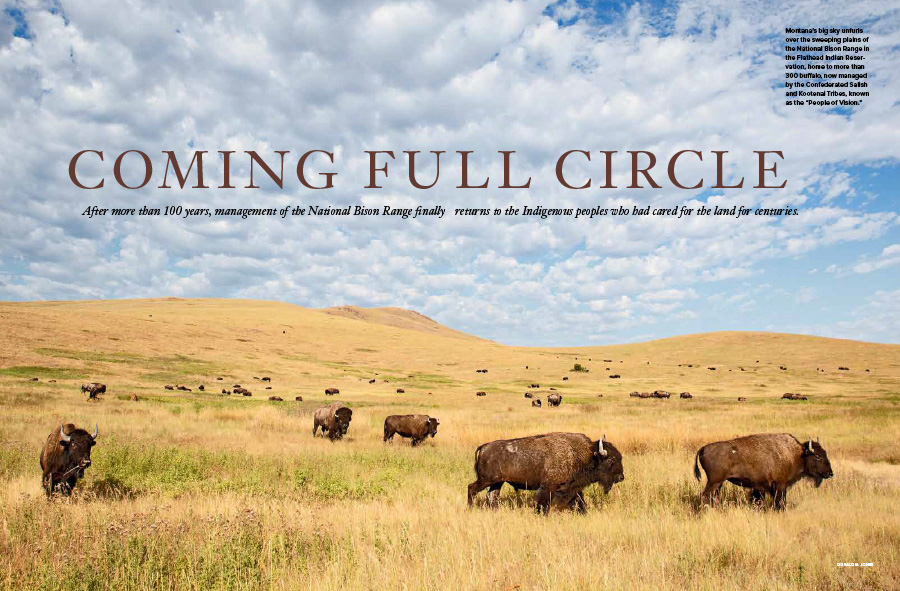 Montana’s big sky unfurls over the sweeping plains of the National Bison Range in the Flathead Indian Reservation, home to more than 300 buffalo, now managed by the Confederated Salish and Kootenai Tribes, known as the “People of Vision.” (Photo by Donald M. Jones)

ON A SUNNY MARCH AFTERNOON, the biting winds remind you that spring has yet to reach western Montana and the Flathead Indian Reservation, the 1.25-million-acre home to the Confederated Salish and Kootenai Tribes (CSKT). At its heart is the National Bison Range, a 29-square-mile haven often called the “Crown Jewel” of the National Wildlife Refuge system. On the drive there, you may come across other wildlife areas with signs featuring Salish and Kootenai words. You may also see a plaid-shirted man, perhaps an irrigator, waving from his ATV four-wheeler while rambling down a dirt road.

Distant snow patches linger on the swollen range slopes. At the foot of the hillsides, near a haystack of antlers outside the visitor’s center, weathered National Bison Range signs still bear the U.S. Fish and Wildlife Service (FWS) logo. Until recently, the Service managed this 113-year-old reserve. But in late 2020, ownership and management—finally—passed from FWS to the land’s original Indigenous caretakers.

For tribal members, the sun now feels a bit warmer, and the hills, covered by clusters of evergreens, seem more poetic. The old federal signs will be among the first things to go, and the name will become the Bison Range. It’s been a long journey, but the Indian people, who say they are one and the same with the bison, are back caring for the land and its animals.

“Who better to care for the animals than the original inhabitants of the land who depended on the buffalo for centuries,” says Tribal Chairwoman Shelly R. Fyant, who has fielded many media calls asking her to explain what it means, culturally and spiritually, to have these lands returned. As you can imagine, it means a lot. “It’s a restoration of something that was taken illegally and a righting of a historic wrong,” she says. That wrong goes way back.

A tale of takings

The history of the Salish, Pend d’Oreille and Kootenai people is complicated. Tribal families occupied lands that would be become Montana, Idaho and Canada for 14,000 years, although elders say “the People” have been here since time immemorial. But western expansion carved up the land and nearly exterminated the buffalo, a source of survival for native peoples. In 1855, the Hellgate Treaty established a reservation larger than Rhode Island for the Tribes’ “exclusive use and benefit” in exchange for ceding 20 million acres of aboriginal territory. But federal policy and expanding settler populations left the Tribes with dwindling lands and no authority over their affairs. 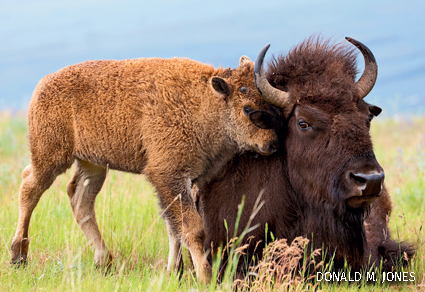 In 1904, against tribal will, Congress broke the reservation into small pieces designated for individual tribal members, with additional lands to be deemed “surplus” by the federal government. Homesteading non-Indians moved onto that “surplus” land and quickly grew to outnumber the Indigenous people. President Theodore Roosevelt then launched his bison-preservation effort and, in 1908, created the National Bison Range, carving 18,800 acres of prime tribal land from the heart of the reservation.

Inhabitants watched helplessly as the land was taken by the United States to preserve an animal the country had nearly destroyed. The Séliš (Salish), Qlispé (Kalispel, a.k.a. Pend d’Oreille) and Ksanka (Kootenai), as named in their own languages, watched as new fences went up, making the bison range inaccessible to Indians. The United States claimed to be savior of the buffalo, when in actuality the original herd came from orphaned calves brought over the Continental Divide by a tribal member in the 1870s.

Elk graze in the highlands of the range (above), an 18,800-acre haven of grasslands, wetlands, forests and peaks nestled in the heart of the 1,953-square-mile Flathead Indian Reservation in western Montana (maps below). Established in 1855, the reservation is home to the Bitterroot Salish, Kootenai and Pend d’Oreille Tribes, whose ancestors thrived on these lands for millennia.

In 1934, CSKT took advantage of the Indian Reorganization Act—the “Indian New Deal”—by becoming the first Tribe to create a democracy in the form of a Tribal Council that was not limited to hereditary chiefs. The council’s primary goal was to buy back all the tribal lands that had been lost.

In the years after 1934, battles raged over federal relocation polices and encroaching railroad lines. More obstacles included poverty, forced boarding schools for Indian children, countless abuses of power and a lack of food, finances and support. At one point, the federal Bureau of Indian Affairs operated all tribal government functions, from education to managing the forests and land leasing.

Having learned that outsiders tended to mismanage their resources, CSKT leaders used the 1975 Indian Self-Determination and Education Assistance Act to take control over tribal health and every other federal Indian program possible. By the 1990s, CSKT had emerged as a national role model in self-governance—and moved toward regaining control of the National Bison Range. 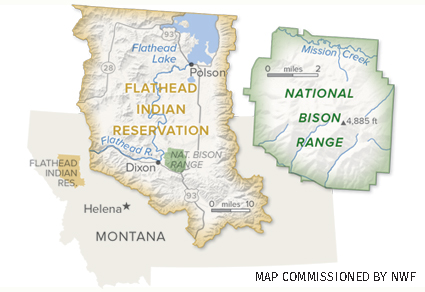 Efforts began in 1994 to initiate talks about CSKT taking on management duties at the range. It took 10 years for those talks to lead to the first cooperative management deal between CSKT and FWS employees, who worked together at the range. But tribal efforts to co-manage the bison range sparked resistance from some FWS staff members and others who felt the refuge should be left alone. The conflict sparked national media coverage, meaning most people only heard about the bison range through this lens of conflict.

The Tribes had a candid discussion with FWS about their frustrations with co-management. A breakthrough came in 2016, when then-FWS Director Dan Ashe met with then-CSKT Council Chair Vernon Finley and other top-level Interior Department officials in Washington, D.C., where Ashe asked Finley if the Tribes wanted the National Bison Range returned to tribal ownership. Finley enthusiastically affirmed their interest, and the CSKT drafted legislation to return the bison range to tribal ownership and management.

It took a few years for that legislation to work its way through Congress, though it enjoyed extensive and active support from local, state and national conservation organizations, including the National Wildlife Federation. Finally, on December 27, 2020, outgoing President Donald Trump signed the legislation into law, bringing bison range history full circle and restoring ownership to the CSKT.

For Finley, who now heads the Kootenai Culture Committee, the loss and restoration feels like a Coyote story, a traditional tale about a trickster who prepared Earth for people. This Coyote story relates how the bison were nearly wiped out, then preserved by the Tribes who got a poke in the eye as the government took more of their land to ‘save the bison,’ yet they eventually prevailed. “In the end, it’s all back in our hands,” Finley says, “the way it should have been all along.”

Fed by the meandering waters of Mission Creek (above), the range supports abundant wildlife species, including pronghorn, bobcats, mule deer, black bears and many songbirds and raptors. Tribal managers have sustained area wetlands and helped restore populations of trumpeter swans (below), which nest by Mission Creek.

Natural stewards attuned to the land

The bison range is one of the largest remaining tracts of intermountain grasslands nationally, with 75 percent of the area covered. Confidence exudes from the Tribes’ deep history in caring for this land and its animals. CSKT’s Natural Resources Department has extensive experience, including its 1975 establishment of the country’s first tribally designated wilderness area—the 91,000-acre Mission Mountains Tribal Wilderness.

Flathead Reservation employees oversee populations and hunting of bighorn sheep in the Little Money district and elk in the Ferry Basin district. Dedicated staff also tend to black bears, wolves, peregrine falcons and recovered populations of trumpeter swans, a large and extremely fast bird that whizzes through the air while in flight. 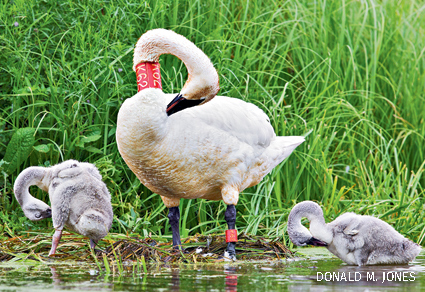 These lands need regular maintenance with controlled burns, water diversions, control of forest encroachment, monitoring of invasive species and the rotation of bison herds to avoid overgrazing of particular sites, all with the goal of keeping herd size between 300 to 350 animals.

As part of the legislation that passed last December, CSKT will continue to operate the lands as a refuge and maintain public access—good news for local patrons and numerous tourists, including those who visit from Glacier National Park up the road. Work is underway in identifying jobs and duties needed to keep everything running smoothly. Discussions include making upgrades to the 1981 visitors center and possibly adding new access points to the famous Red Sleep Mountain Drive and other amenities around the refuge. CSKT will take over complete management by the end of 2022—sooner if plans go well.

Despite heartbreaking trials, the “People of Vision” (as the Tribes call themselves) credit the wisdom of elders and ancestors for their success. For tribal member Sheila Matt, a former coordinator at the Bison Range, the restoration is welcome news sparking complicated emotions. Matt served during a time of conflict with FWS, but one memory stands out for her—the time she shuttled a group of tribal elders to staff-only sections at the highest elevations of the bison range. Elders are the keepers of the language and traditional knowledge. After more than a century of exclusion, they finally set eyes on that once-unattainable section of the bison range. “That was the best day in my entire work life,” says Matt. Now the door is open for future elder trips. “It’s like we laid the foundation to the future.”

Watch “In the Spirit of Atatice: The Untold History of the National Bison Range” »

For two decades, NWF has supported the Confederated Salish and Kootenai Tribes’ campaign to manage the National Bison Range. The Tribes played a pivotal role in saving bison from extinction in the late 1800s, and transferring the range to tribal control will help right a historic wrong and protect a sacred place for future generations.

Robert McDonald is Bitterroot Salish, enrolled in the Confederated Salish and Kootenai Tribes and serves as the CSKT communications director.

When a Treasured Relative Returns »
Blog: We are Here, and Buffalo are our History and Future »
Press Release: PROGRESS for Indian Tribes Act »