Pulse of the Planet 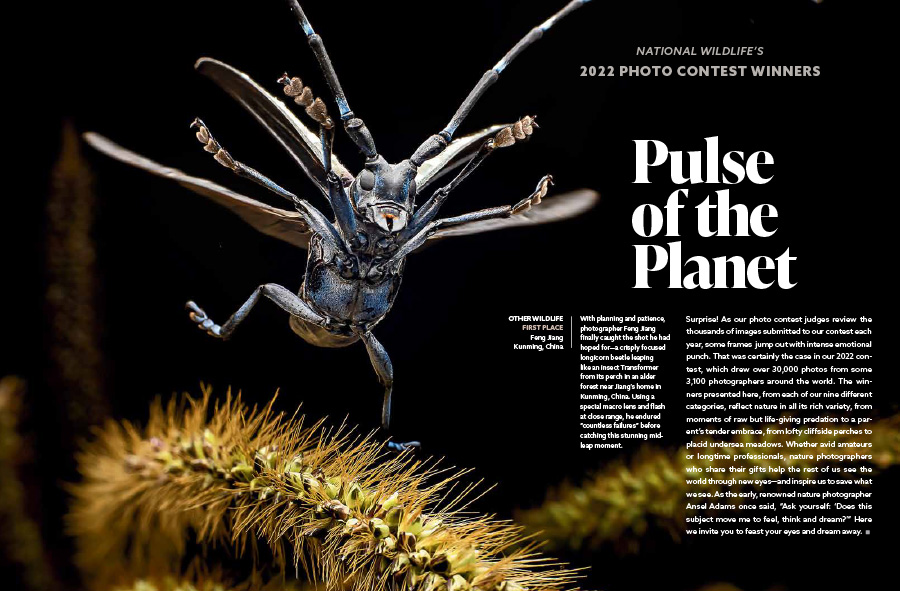 SURPRISE! As our photo contest judges review the thousands of images submitted to our contest each year, some frames jump out with intense emotional punch. That was certainly the case in our 2022 contest, which drew over 30,000 photos from some 3,100 photographers around the world.

The winners presented here, from each of our nine different categories, reflect nature in all its rich variety, from moments of raw but life-giving predation to a parent’s tender embrace, from lofty cliffside perches to placid undersea meadows. Whether avid amateurs or longtime professionals, nature photographers who share their gifts help the rest of us see the world through new eyes—and inspire us to save what we see.

As the early, renowned nature photographer Ansel Adams once said, “Ask yourself: ‘Does this subject move me to feel, think and dream?’” Here we invite you to feast your eyes and dream away. 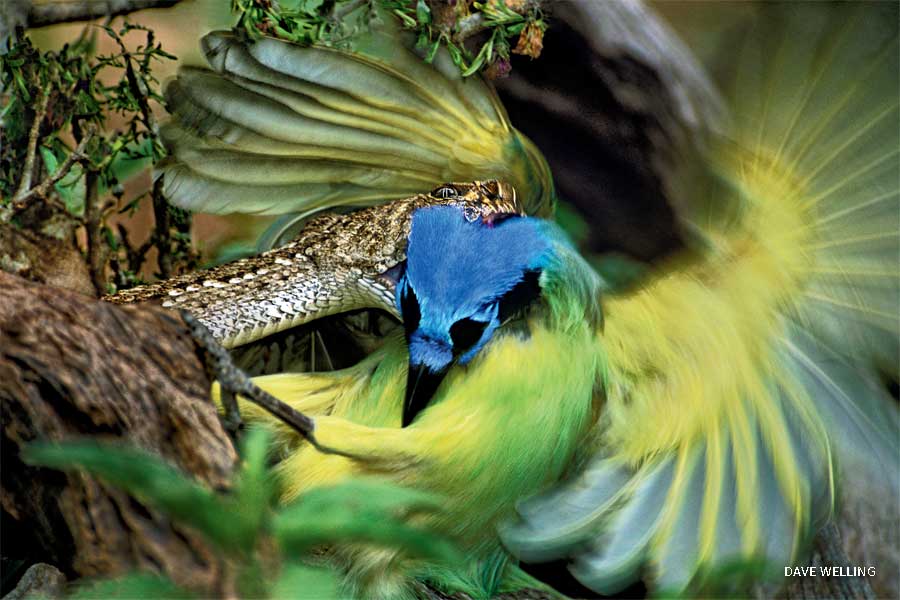 As Dave Welling hid in a blind near an artificial pond on a ranch in the arid Rio Grande Valley of South Texas, he began photographing a pair of green jays that had stopped for a drink. When one jay moved away, Welling continued to photograph the other until he heard loud avian shrieking. Swinging to his left, Welling was stunned to see a that a large western diamondback rattlesnake had struck the missing jay and held it in a death grip as the bird struggled for life. Shooting with film in his camera, Welling documented the scene for more than five minutes as the bird moved from struggle to resignation, eventually to be swallowed whole. “This really shows what it’s like for creatures living in the wild,” says Welling. “There are risks for both predators and prey.” He hopes humans will come to value the entire range of wildlife that need protection. “Let’s give them some space, a place to live, a chance.” 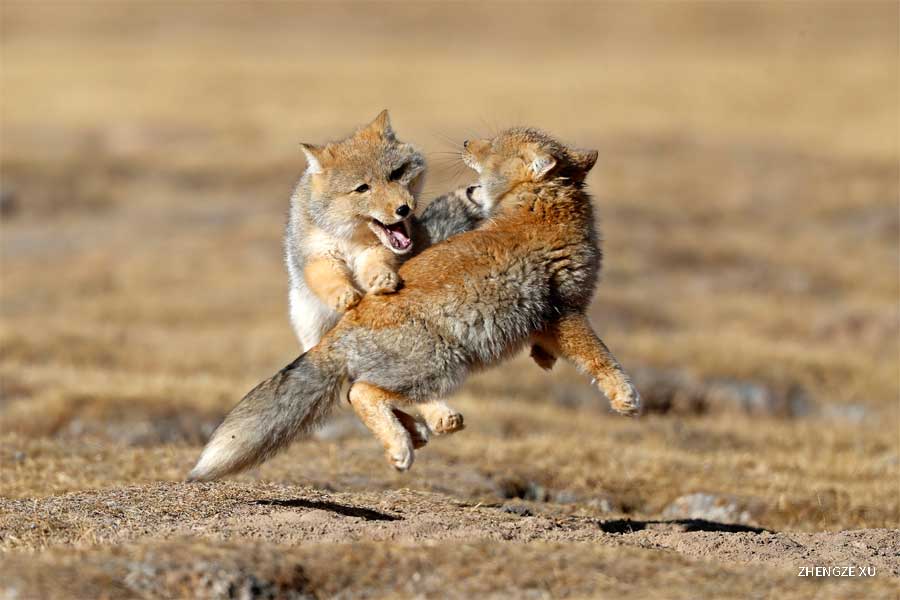 While their parents are out hunting for a meal, two 10-month-old Tibetan fox cubs play just outside their den on the Tibet Plateau in China’s Qinghai Province. Endemic to this famed high-elevation region—known as the “Roof of the World”—the diminutive foxes are abundant predators that prey mainly on plateau pika. Before taking this photo in March 2021, Zhengze Xu spent so much time near the animals’ den that “they got used to and totally ignored me,” he says. The cubs’ play can get aggressive, but “this kind of fighting and biting is good practice for future hunting,” Xu says. 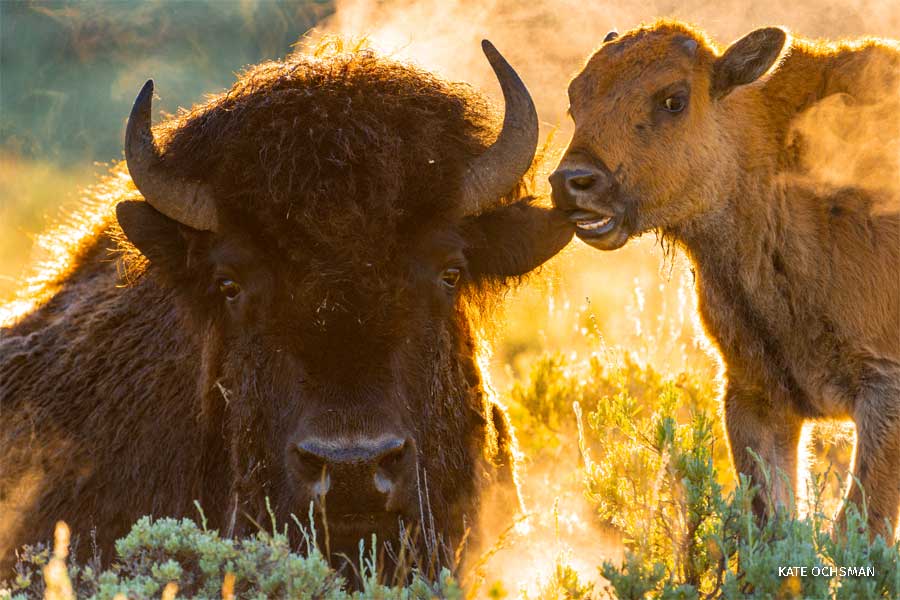 Tall mountains shielded the morning sun as Kate Ochsman slowly drove into the Lamar Valley of Yellowstone National Park in June 2020 at the height of bison calving season. Suddenly, the sun‘s golden rays spilled over the mountain tops, illuminating the iconic valley. Backlit, with “mystical steam rising off their warm bodies, the bison looked otherworldly,” she recalls. Spotting this mother-calf pair, Ochsman stopped to make images. “The calf looked so cheeky and obsessed with his or her exhausted mother,” she says. “This, to me, is universal motherhood.” 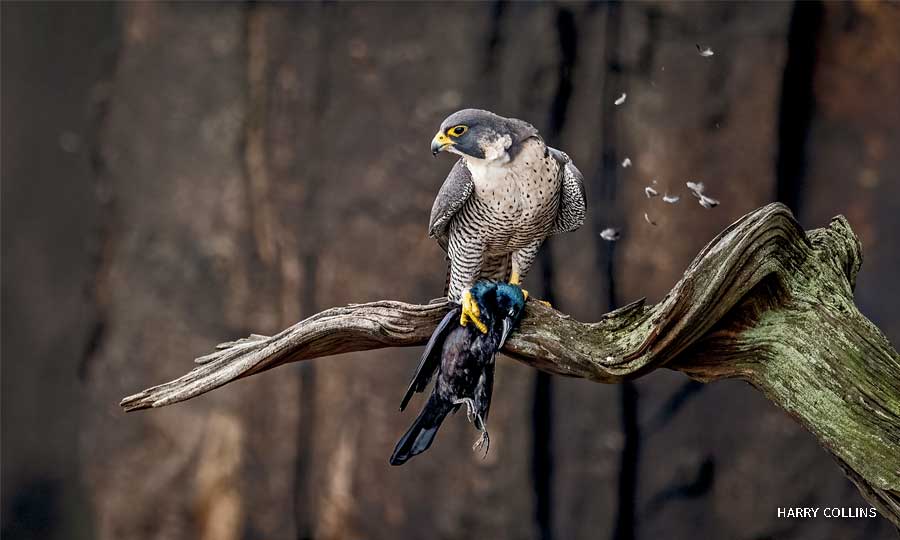 Sitting on a gnarled perch jutting from a New Jersey cliff some 500 feet above the Hudson River, a female peregrine falcon plucks the downy under-feathers from a freshly killed grackle that her mate brought her as a courtship gift. Documenting this pair of falcons since 2015, Harry Collins hopes to show all aspects of wildlife behavior, raising awareness of “all we stand to lose” without conservation. 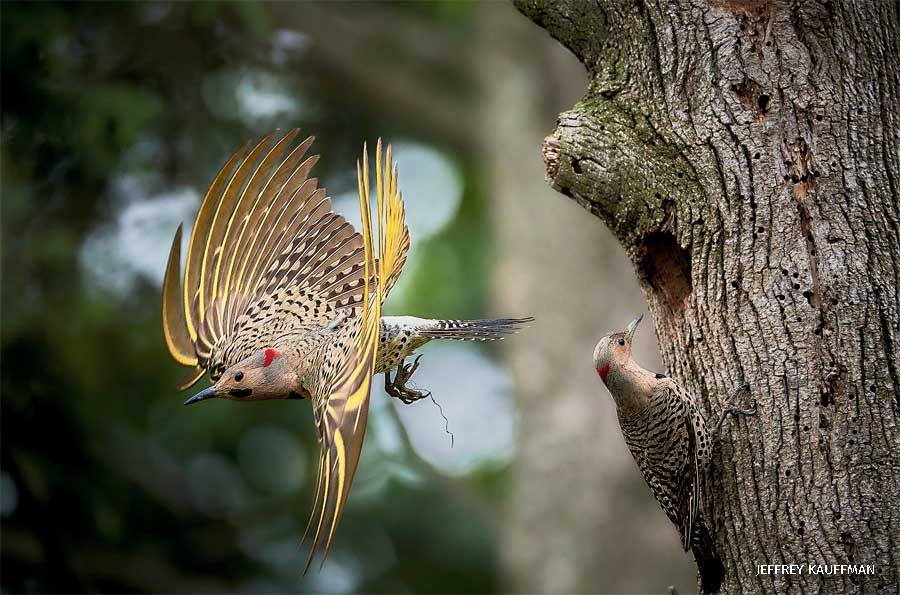 A male northern flicker shoots out of his nest to hunt for his hungry brood while his mate prepares to hop back inside to guard their chicks. By studying this pair from a blind for two years near his Pennsylvania home, Jeffrey Kauffman learned how they worked as a team. “The tricky part,” he says, was showing both birds in one frame just as the male came rocketing out. 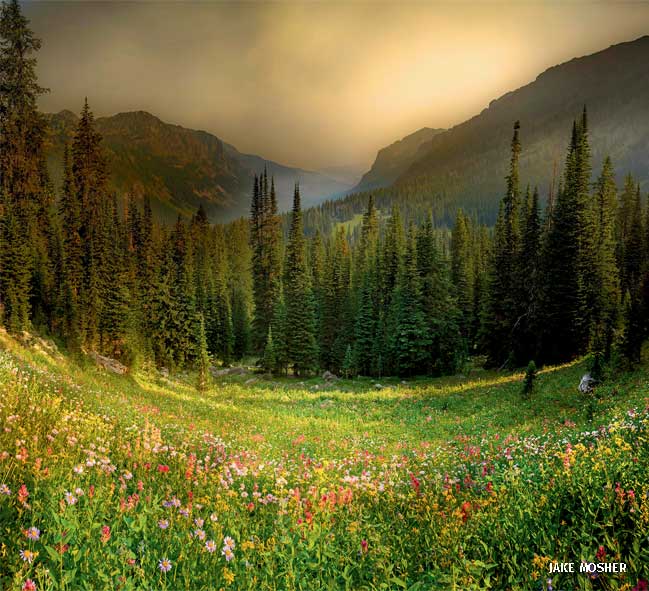 On a July day in 2021, Jake Mosher was awed by the beauty of wildflowers in bloom in Montana’s Gallatin Mountains—and horrified by the yellow glow of distant smoke from that summer’s relentless wildfires. “In the contrast of beauty and doom,” he says, “I was hoping to show a sliver of what we could lose during this unprecedented time of climate change.” 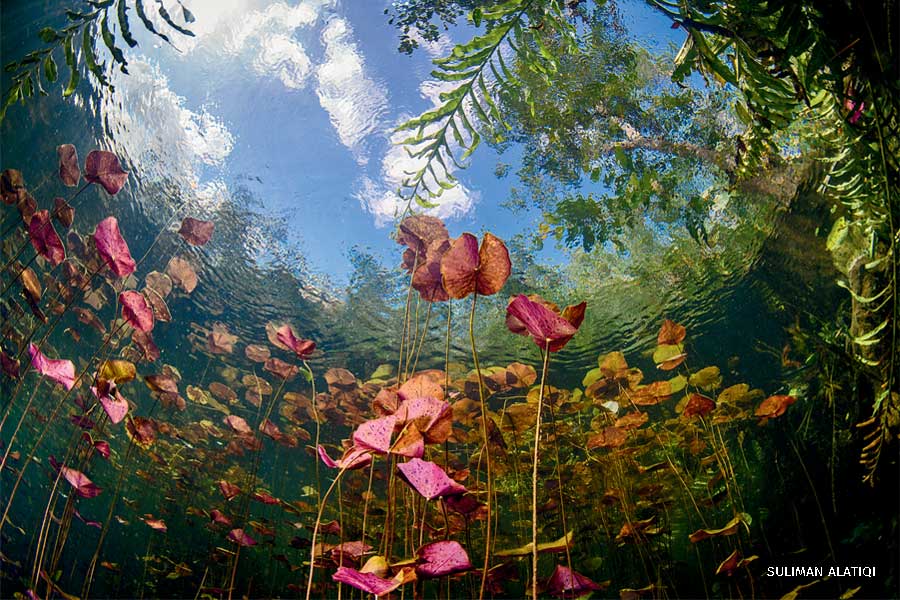 A lyrical garden of water lilies stretches toward the crystalline surface of a cenote in Mexico’s Yucatán Peninsula, where underwater photographer Suliman Alatiqi waited more than 20 minutes hoping for exactly the right light to capture the clouds and trees in the world above. He hopes the photo’s vivid over-under perspective helps convey the “interconnectedness of nature.” 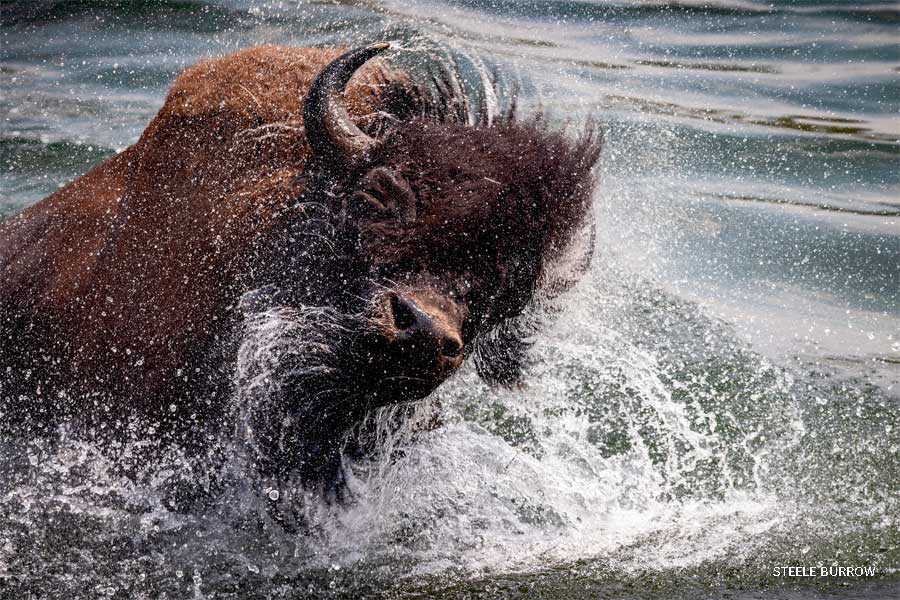 On his first trip to Yellowstone National Park, Steele Burrow watched amazed as a large herd of bison swam across the Yellowstone River in Hayden Valley. “I had no idea bison could swim,” says Burrow, who captured the moment a large bison emerged and began shaking water off its fur like a massive dog. “It was surreal,” he adds, “an incredible fraction of a second that won’t happen again.” 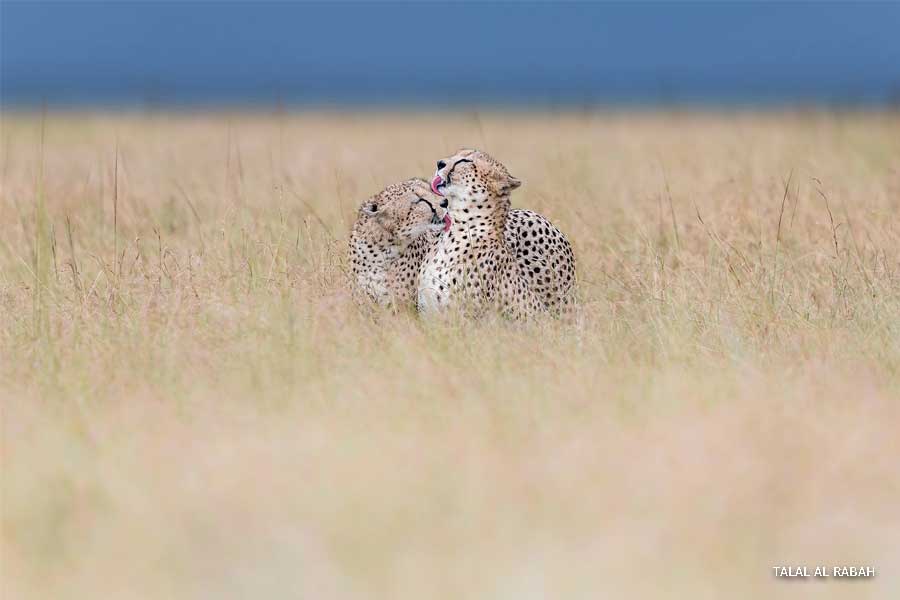 On the last day of a 2020 trip to photograph wildlife in Kenya’s Maasai Mara National Reserve, Talal al Rabah saw a pair of cheetahs hunting in a light rain. After it stopped, they began grooming each other, “as if drying themselves from the rain,” he says. This tender moment in diffuse light lends poignancy to this portrait of the world’s fastest land mammals, now dwindling toward extinction. 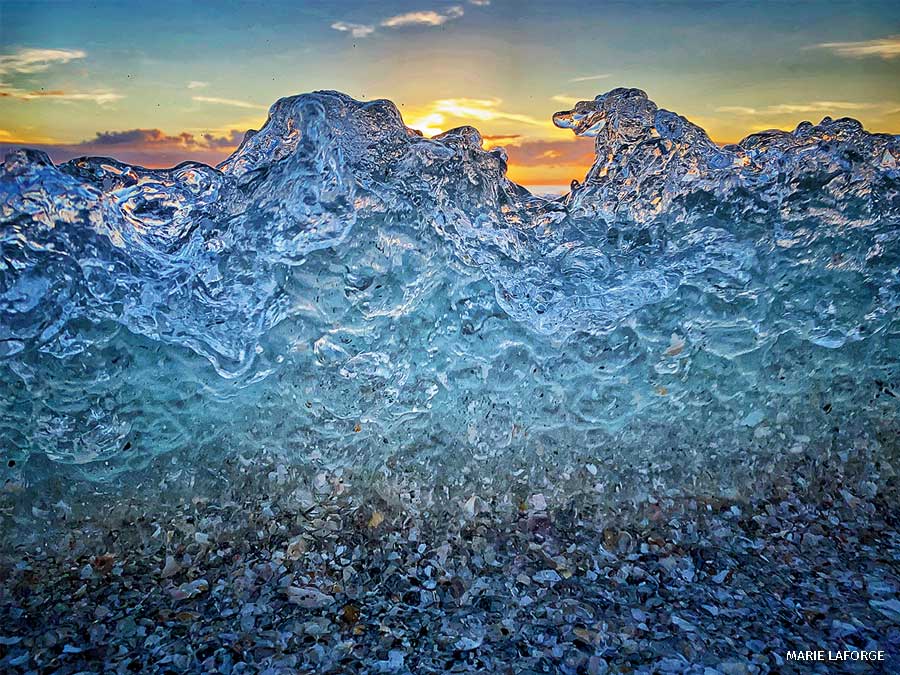 When Marie Laforge walks the beach near her home in Florida, she looks for small details others might miss, such as the fleeting beauty of a tiny wave. For this shot, she got down low, ignoring the spray on her phone. “I love the movement of water, how it captures the light and creates shapes like a sculpture,” she says. “And I love the idea that once you capture that moment, nobody will ever capture it again.” 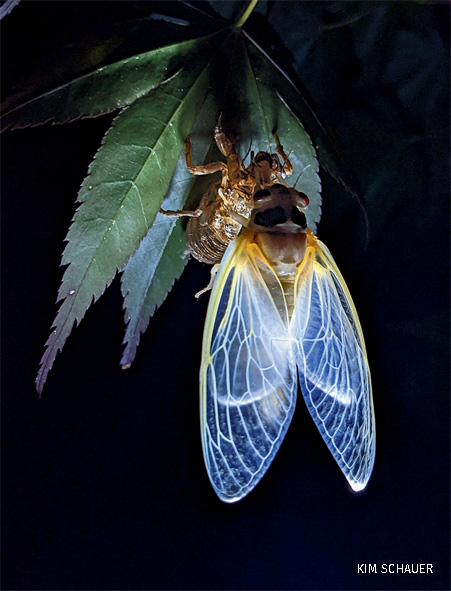 Mesmerized by the magical emergence of 17-year cicadas in May 2021, Virginia-based science teacher Kim Schauer photographed the insects at night to show her students that “bugs can be beautiful.” Using a flashlight to illuminate a newly emerged cicada, she made this ethereal portrait on her mobile phone. “It looks like it’s on fire from the inside out,” she says, “with wings like a cathedral’s stained glass.” 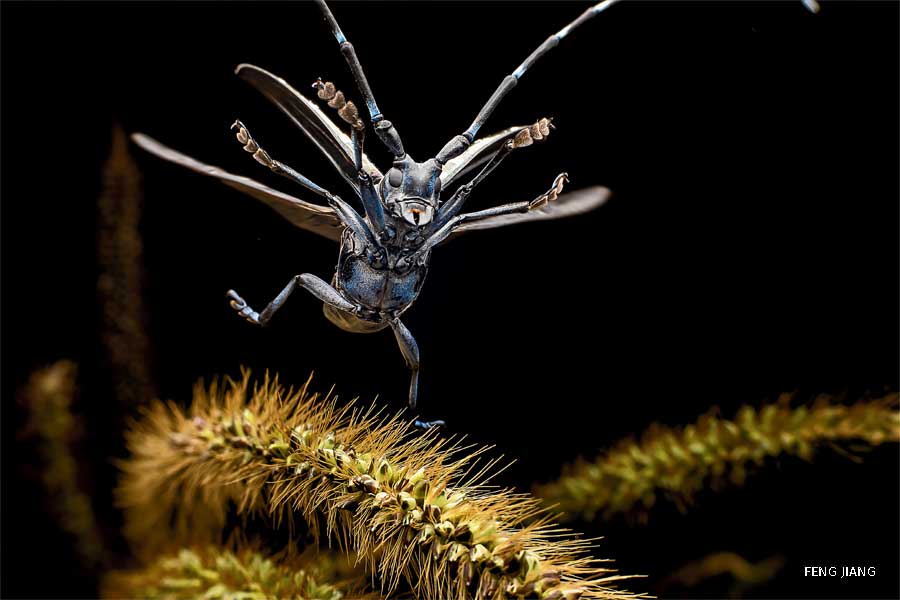 With planning and patience, photographer Feng Jiang finally caught the shot he had hoped for—a crisply focused longicorn beetle leaping like an insect Transformer from its perch in an alder forest near Jiang’s home in Kunming, China. Using a special macro lens and flash at close range, he endured “countless failures” before catching this stunning mid-leap moment. 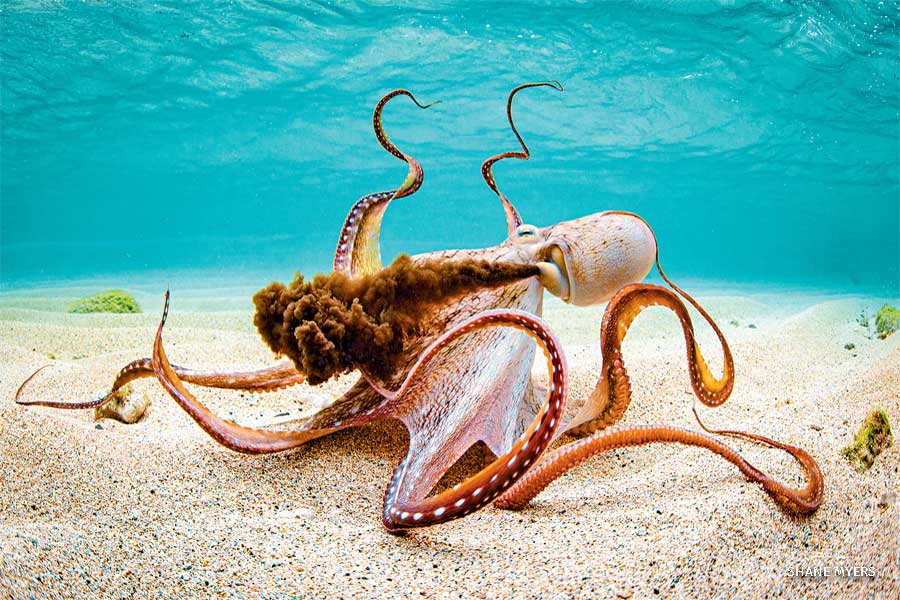 As the pandemic raged in 2020, few tourists visited O’ahu’s beaches in Hawai’i, which may have made sea life freer to roam. Swimming “like Superman” with his camera in outstretched arms, Shane Myers suddenly saw this octopus on a sandy patch between corals. “We startled each other,” says Myers, who caught one clear shot as the animal inked before darting away. 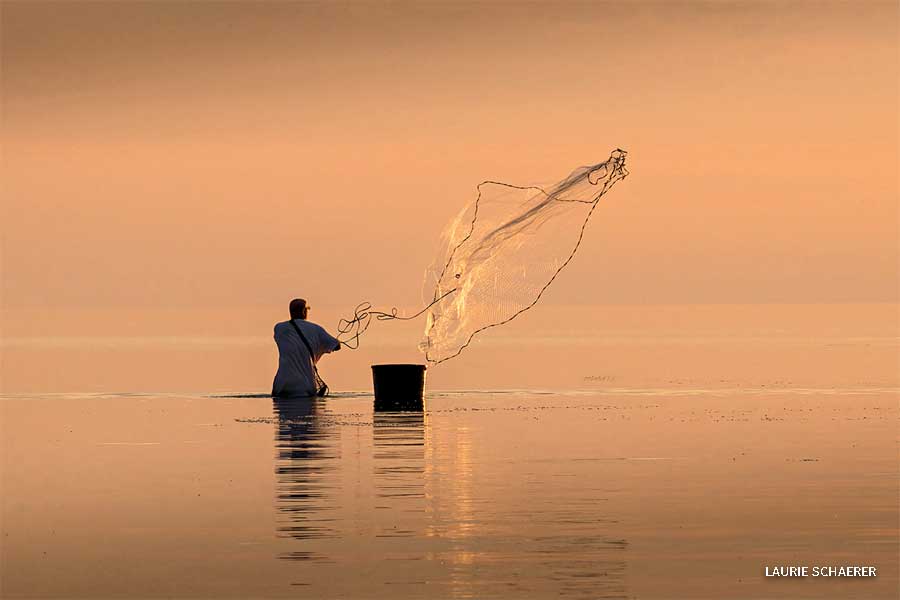 Hip-deep in the salty waters of the Gulf of Mexico off Alabama’s coast, a fisherman casts his net in the golden evening light. Laurie Schaerer often comes to this small fishing town of Bayou La Batre to photograph nature. On this calm night, she says, the water was “smooth as glass,” and the clouds and light helped create a timeless image. “Fishing to feed their families is a way of life for people here,” she says. “He’s probably been doing this his whole life.” 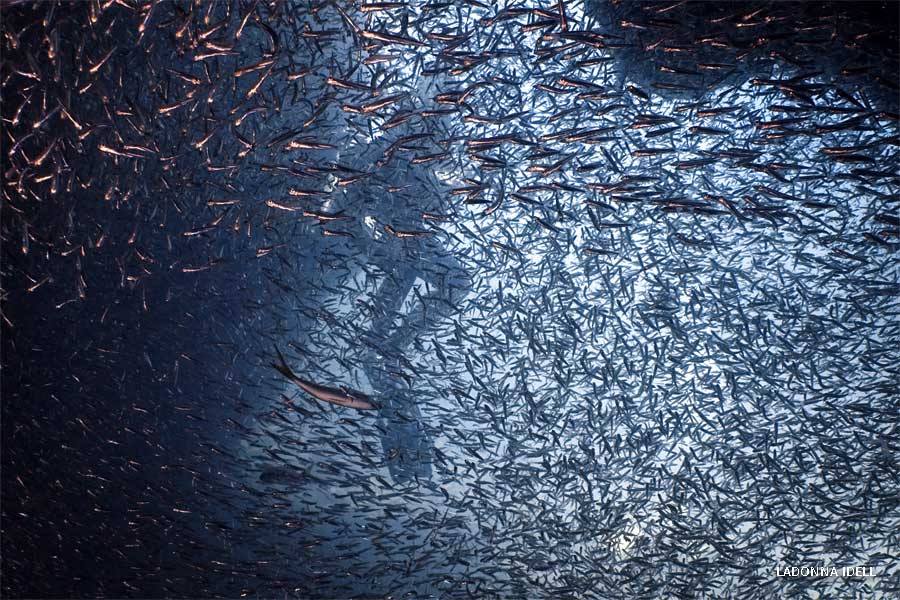 Diving 45 feet below the surface of the Caribbean in a protected reserve, Jardines de la Reina, just south of Cuba, photographer Ladonna Idell and a friend encountered a reef overhang and cave opening filled with a massive school of sparkling silversides. “The fish simply parted and regrouped as I swam through the cave entrance,” she says. Because her dive buddy remained outside the cave, Idell was able to capture this “surreal photograph” of the diver silhouetted behind the fish. 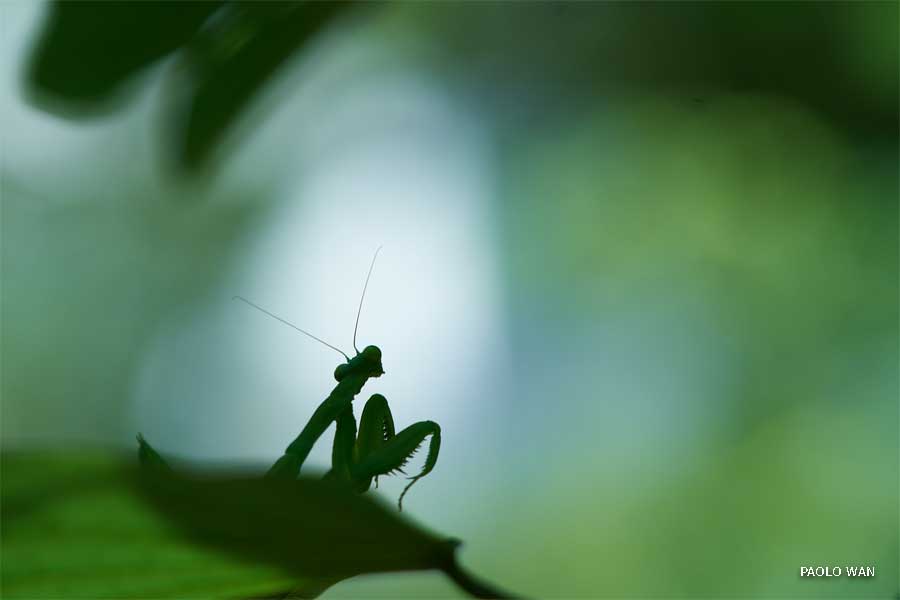 Fifteen-year-old Paolo Wan made this photo of a tiny mantis last year near his home in the mountains of Shenzhen, China. “It took around 30 minutes and a lot of trial and error to achieve the final form of the photo,” he says. “Luckily, the mantis was patient with me.” A lifelong lover of animals and nature, Wan began photographing these subjects when he was seven. Asked what he’d like viewers to gain from viewing his images, he says, “I want people to see how beautiful their backyards can be.” 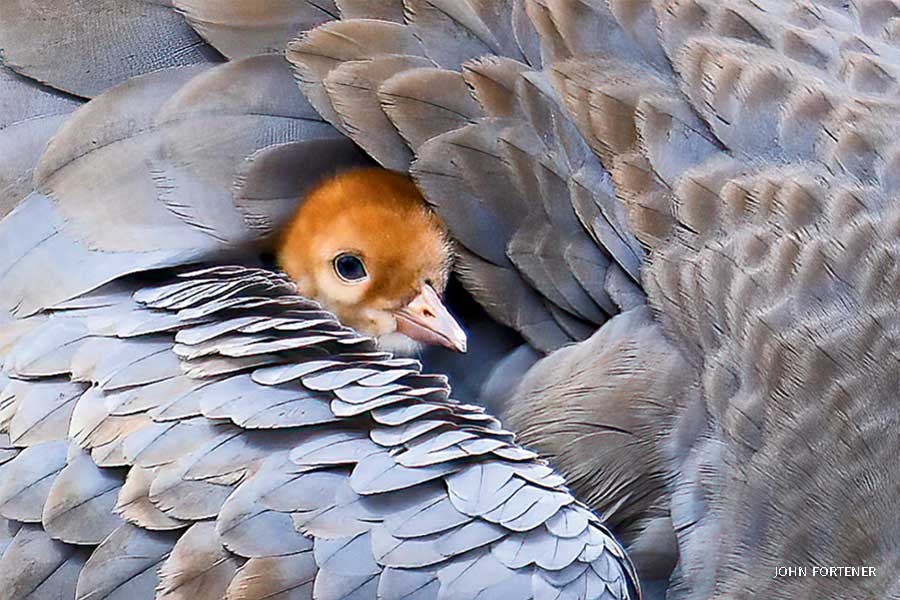 A day-old sandhill crane chick peeks out from its parent’s protective feathers at a park in Michigan known for its abundance of waterfowl. John Fortener, now 16, had gone to the park on a rainy April morning knowing that eggs from the area’s nesting sandhill cranes would be ready to hatch. Using a zoom from a safe distance, he was delighted to see the tiny head pop in and out of this feathery tent. His advice to other young photographers? “Get outside as much as possible and just watch.”

Each summer for 13 years, Mark Kelley has documented bears along Alaska’s Anan Creek, whose massive run of pink salmon lures abundant wildlife. The area lies within the Tongass National Forest—part of Earth’s largest temperate rainforest—and it’s one of the few places where both black and brown bears can be found in close proximity to each other, sharing the same stream. Here are 10 memorable images from Kelley’s vast collection. 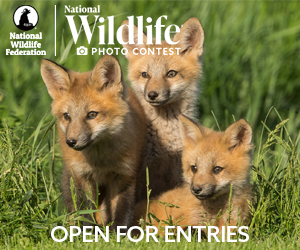