The National Wildlife Federation celebrated some monumental gains for habitat conservation in 2016. This fall, with the urging of NWF, its affiliates and partners, President Barack Obama designated or expanded three national monuments under the American Antiquities Act of 1906. Together, these three areas permanently protect nearly 600,000 square miles of ocean and land from development, energy extraction and commercial fishing while providing species refuge in a changing climate. 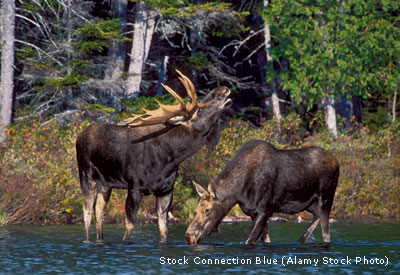 Katahdin Woods and Waters National Monument. This past August, a private gift of about 87,500 acres in north-central Maine became the Katahdin Woods and Waters National Monument, a goal of NWF affiliate the Natural Resources Council of Maine for more than five years. A significant addition to the state’s public lands, these forests and rivers provide habitat for wildlife such as moose (right), black bears, lynx and otters.

Papahānaumokuākea Marine National Monument. This past year, NWF affiliate the Conservation Council for Hawai‘i worked with NWF and other partners to advocate for the expansion of this monument. During August, it grew to 582,578 square miles of islands, atolls and ocean—the largest protected area in the world. It provides essential habitat for more than 7,000 marine species, including 14 million seabirds and endangered monk seals as well as sharks, tunas, sea turtles and an abundance of coral reef life (above).

Northeast Canyons and Seamounts Marine National Monument. With support from Audubon Society of Rhode Island and NWF affiliate the Environment Council of Rhode Island, NWF joined a coalition that generated more than 300,000 comments in favor of this monument. Established this past September about 130 miles southeast of Cape Cod, it protects 4,913 square miles of ocean where corals hundreds of years old live in canyons deeper than the Grand Canyon and on mountains that rise thousands of feet from the seafloor. 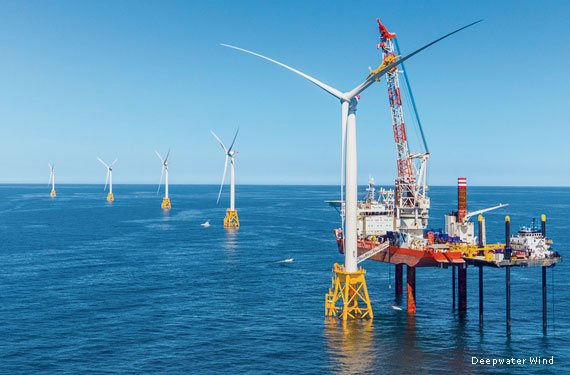 Since 2010, NWF, affiliates and other partners have worked to advance offshore wind energy in the Atlantic while ensuring wildlife such as endangered North Atlantic right whales are protected. NWF and its affiliate the Environment Council of Rhode Island gained support for the nation’s first offshore wind farm (above), which Deepwater Wind installed this past summer off Rhode Island. It can produce 30 megawatts of electricity, enough to power 17,000 homes.

On August 8, following two years of pressure by NWF and affiliate the Environmental League of Massachusetts (ELM), Governor Charlie Baker signed a bill committing to obtaining 1,600 megawatts from offshore wind power by 2027. “This is a game changer,” says ELM Executive Director Ken Pruitt. “It is inspiring, precedent-setting and incredibly important if we are going to reduce pollution and avoid catastrophic climate change.”

Indeed, this past September, New York Governor Andrew Cuomo initiated an Offshore Wind Master Plan. A coalition that includes NWF and affiliate Environmental Advocates of New York worked for the past six years to gather support for the plan.

Catherine Bowes, NWF senior manager of climate and energy, says these commitments are signs that U.S. offshore wind power is gaining momentum: “This is just the beginning.” 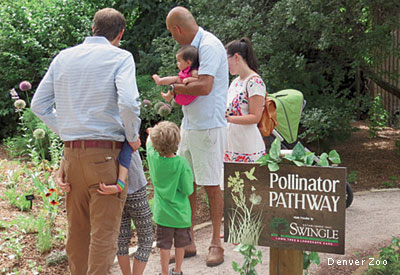 When the White House’s Pollinator Health Task Force issued its national strategy to save declining monarchs and other pollinators in 2015, NWF, its affiliates and partners answered the call by creating an army of worker bees: gardeners planting for pollinators. Hundreds of thousands of gardeners have taken up the Million Pollinator Garden Challenge™ and registered their gardens on a nationwide map. More than 200 mayors have joined the Mayors’ Monarch Pledge to create pollinator habitat in their cities. NWF has certified and registered 170 Community Wildlife Habitats™, and this June celebrated the opening of its 200,000th Certified Wildlife Habitat®: Denver Zoo’s Pollinator Pathway (above), a 2,500-square-foot garden featuring 80 different species of flowers, trees and shrubs.

Additionally, NWF affiliates along the monarch’s Midwest migration corridor have worked with state wildlife agencies and hosted summits to provide input on state conservation plans for monarchs. One plan has been completed, thanks to Missourians for Monarchs, a group formed by NWF affiliate the Conservation Federation of Missouri, NWF and other organizations.

“Three out of four flowering plants, including many we and wildlife eat, are fertilized by pollinators,” says Mary Phillips, director of NWF’s Garden for Wildlife™ program. “We need to do all we can to help these important animals survive.” 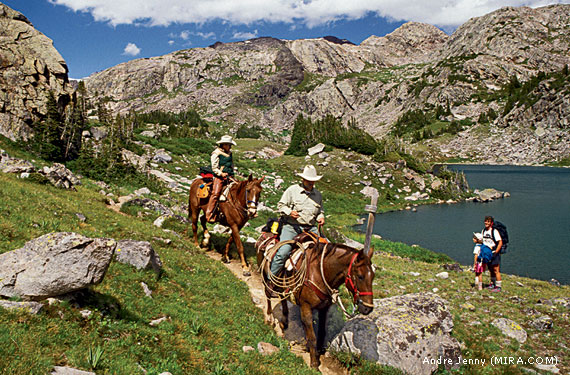 Regional Wins for People and Wildlife in 2016

The National Wildlife Federation, its affiliates and other partners are continuously working to conserve wildlife and their habitats. Here are a few of our successes:

Keeping public lands public. During the past two years, the Federation, affiliates and partners in states across the nation have banded together to defeat more than 40 bills that would have transferred management of U.S. Bureau of Land Management and U.S. Forest Service lands (such as Bighorn National Forest in Wyoming, above) to states. If transferred, these public lands could have been sold to private industries for development or energy extraction.
Visit: keepitpublic.nwf.org

Protecting the Great Lakes. At the Federation’s annual meeting in June, NWF affiliates adopted a resolution to oppose commercial net pen aquaculture from taking hold in the Great Lakes. Michigan United Conservation Clubs, an NWF affiliate, and NWF led a coalition of conservation organizations that has since stopped state legislation that would have permitted such aquaculture in these lakes. This could have had dire consequences: Concentrated fish feces from pens could have exacerbated harmful algal blooms, and escaped fish could have infected and bred with wild fish populations and introduced invasive species.
Visit: www.nwf.org/GreatLakes

Being climate smart. This past summer, NWF worked with the Maryland Department of Natural Resources and Queen Anne’s County to transform more than 1,000 feet of eroding bank on Maryland’s Conquest Beach into a stable shoreline of marsh grasses, cobbles and sand. One of the nation’s first living shorelines designed to combat climate change impacts such as sea-level rise and strong waves from severe storms, it also provides habitat for crabs and birds.
Visit: www.nwf.org/climate-smart

Restoring the Gulf. For the past six years since the Deepwater Horizon oil spill disaster in the Gulf of Mexico, NWF has called upon federal and state agencies to fund projects that will make the greatest difference in restoring the health of the region’s wildlife habitat. When the RESTORE Council—the U.S. entity tasked with shaping how more than $3 billion in penalties from the spill should be spent—released its updated plan this past August, it reflected NWF’s goal of prioritizing science-based restoration and set the stage for the projects NWF is recommending, such as rebuilding wetlands and oyster reefs.
Visit: restorethegulf.nwf.org

Preserving Amazon forests. Each year for the past decade, NWF has appealed to buyers and traders of Brazilian soy to renew their pledge to not obtain soy from farms that have cleared Amazon rain forest. In 2016, the parties finally agreed to renew this voluntary zero-deforestation agreement indefinitely, protecting millions of acres of Amazon forest to which many U.S. birds migrate and where rare animals such as jaguars and ocelots live.
Visit: international.nwf.org/deforestation/soy